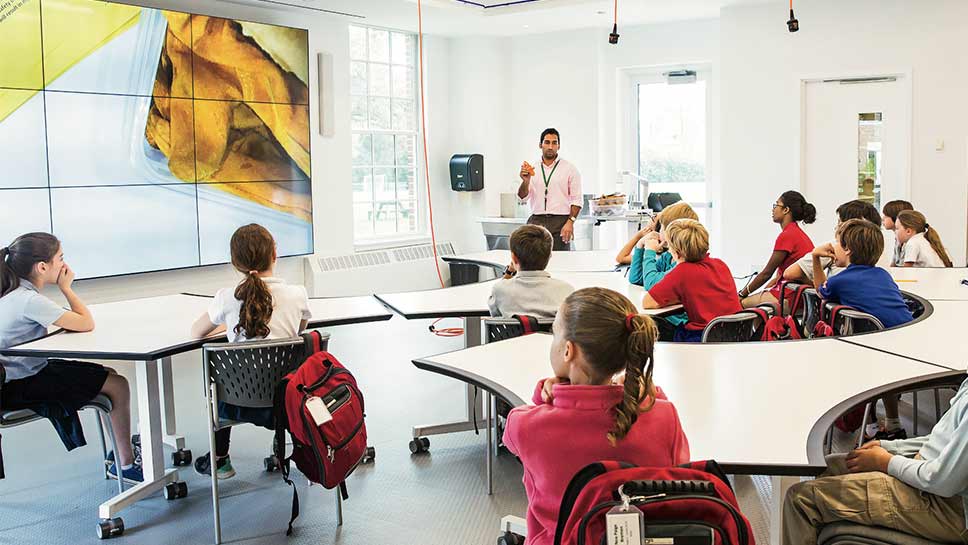 Nearly four years ago, students at Lake Forest Country Day School (LFCDS) were asked to create their ideal learning space. They responded saying they would like an “Iron Man’s lab and a 3D printer.” What began as a 3D printer in an empty classroom was transformed, over time, into a space just shy of a lab Marvel’s character Iron Man made famous, full of cool gadgets. In September, LFCDS unveiled its Innovation Center.

The space is separated into three areas: the Innovation Lab, the Think Tank, and the Robotics Lab. The Innovation Lab boasts an impressive set up—including an 80-square-foot, nine-screen television wall, workstations full of tools, and writable surfaces on cabinets, walls, and tables. The television wall is used to expand the classroom. For example, a French teacher might show a Google Map of Paris during the day’s lesson or a robotics teacher might magnify a circuit he/she is discussing so that students can see the detail. The writable surfaces allow students the freedom to scribe creative thoughts and flesh out ideas—removing limits from creative thinking.

In the Think Tank, students can review and address problems and think critically about solutions. The space is designed to incorporate students’ different learning styles. It caters to visual, auditory, and hands-on learners, amongst others. The Robotics Lab is fitted with workstations that enable students to build robots. Lego Robotics has been a part of the 7th grade curriculum for more than 13 years and presents students with problems and challenges them to create robots to solve them. The Robotics Lab is such a popular area that 80 percent of the 8th graders are signed up to use the Lab voluntarily.

Since the Innovation Center opened, teachers have embraced it whole-heartedly and are eager to use it.

“We’re thrilled to see how [the students] can connect their ideas to what we are doing in the classroom,” says preschool teacher Jen Baurer. “We want children to bring the problems to us and go through the design thinking process to solve them.”

Students are just as thrilled. Eighth graders Calvin Osborne and Max Collins developed a Minecraft module involving extensive and detailed coding. Since the summer, the module has been downloaded more than 9,000 times all around the world. The pair plan to use the new space to expand their project. The Innovation Center isn’t restricted to science and math. In fact, a recent group of 8th grade history students argued Supreme Court cases in a mock courtroom set up in the Innovation Lab, replete with all of the proceedings visible on the television wall.

LFCDS, as a whole, is growing along with the digital age. “One of the reasons I wanted to be part of this school was because of its long-term vision,” says Head of School Bob Whelan. “The School is ahead of the curve in recognizing what the 21st century will require. Our students will have careers that haven’t even been invented yet. We know that no matter where they land, students will need to be able to communicate their ideas and be critical problem solvers. The Innovation Center allows us to extend our students’ experience beyond the walls of a classroom and encourages them to use design thinking to approach challenges. When they are able to apply that process and work collaboratively, they will be positioned to successfully address challenges that don’t even exist today.”

The Innovation Center is a space that will inspire and challenge LFCDS students to develop the skills necessary to become well-rounded individuals who will succeed, not only in school, but in life.