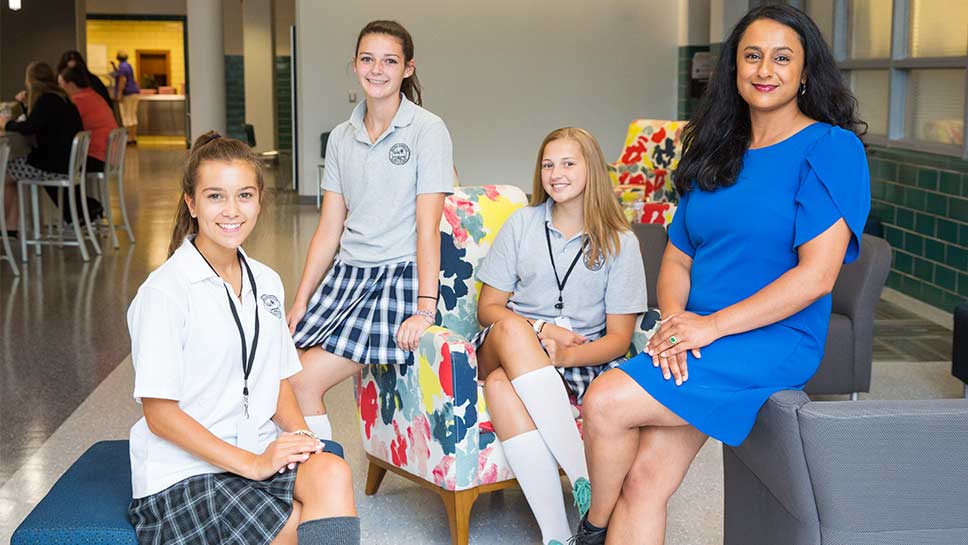 As a design and retail management major, Elizabeth Pattara was sure of one thing coming out of college: “I was never going to wear a basic black suit to work.” Creativity, as it turned out, became more of a staple in her career path than wardrobe. Pattara is the newly named president at Regina Dominican, a college preparatory Catholic high school for women in Wilmette. It is her experience in the business world, deviating from a traditional education background, setting new trends in the institution’s leadership history.

Regina Dominican opened in 1958, established by the Adrian Dominican Sisters, and guided by the mottos of caritas and veritas: compassion and truth. “It is these core values that inform Regina’s diversity,” says Joan Mulvihill Kitchie, vice president of advancement. Today’s enrollment is approximately 300, with Catholic students comprising 70 percent of the population, and 30 percent representative of other religions including Protestant, Jewish, and Muslim. “We are one of the best kept secrets on the North Shore,” says Pattara. Getting the word out is not only at the top of her to do list, but one of her strengths.

A former Vanguard executive tasked with launching and distributing new product lines, Pattara, age 39, knows the nuances of marketing. When Vanguard brought the Pennsylvania native to Chicago to cover the Midwest region, Pattara simultaneously pursued an MBA at Northwestern University. It also happened to be the fall of 2008, an economic crisis loomed, and she couldn’t help but take note of her “clients and the toll of the challenging times.” On the side, she practiced yoga and meditation, and even began teaching them as a hobby. Soon, Pattara says, everyone was asking: “How are you so happy through all of this?” It forced a reevaluation of both her personal needs and those possibly lacking in a corporate structure. She became involved as an educator with the Chopra Center for Wellbeing, and then founded Samadhi, offering stress management trainings to executives.

When Regina began its nationwide search for a president, Fr. Peter Wojcik, co-director at the Archdiocese of Chicago Department of Parish Vitality and Mission, knew Pattara through the alumni board at Kellogg and was familiar with how active she was in non-profit organizations. Fr. Wojcik said he “could not think of someone who would be a better leader supporting young women” emphasizing that “for today’s world we must not only have visionary leaders in finance and operations but most of all in education, where young people will be shaped and introduced to the global community.” The timing and transition for everyone seemed right.

At Regina, where 48 percent of females are from surrounding North Shore suburbs and 52 percent commute from the city, what Pattara says impresses her most is the encouragement towards “independent thinking.” It is that mindset that fostered her hiring as president, with business credentials to see the school through fundraising of the Gateway to Leadership campaign of campus renovations, including the cafeteria, athletic field, and an updated auditorium.

“Regina is like a boutique school and that makes us able to cater to the individuality of students,” says Mulvihill Kitchie, also an alum and former student parent. Part of that specialized nurturing includes a strong effort to connect with the community. For example, last year a Regina dance performance was choreographed in partnership with Northwestern University’s department of physics and astronomy.

The most recent graduating class boasts a 100 percent college acceptance and $9.7 million earned in scholarship money. A roster of Regina alums throughout the past nearly 60 years can be found contributing to the fields of art, science, finance and law, among others.

What Pattara says she has also noticed is how much fun students have accessorizing their school uniforms with fashionable shoes or chic hair pieces—small details to make the look their own. That is a style tip the school’s president knows well, admitting that her professional dress code has often made her “the queen of black suits.” Originality and standing out is all part of the design for the bright future ahead at Regina.

2016 Graduates were accepted at: