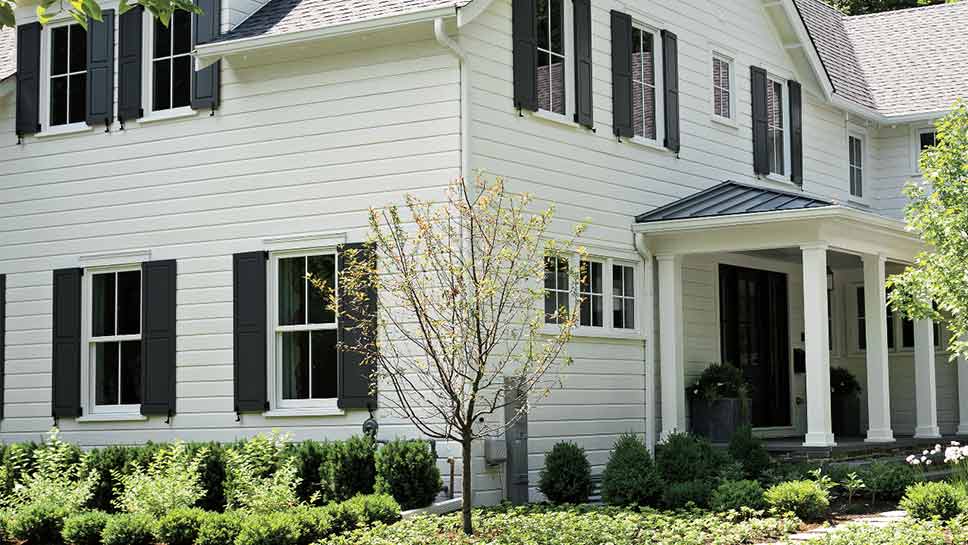 In 1907, Winnetka architect William A. Otis built an elegant Cape Cod cottage for Allen Haines and his wife, Edith. Participants on September’s Cooks’ Tour house walk will get to see what another young couple has done to restore and expand the historic home for 21st century living. Every old house has a story. The story of the house that Edith and Allen Haines built opens in 1907 with visions of Cape Cod cottages and entertaining along the shores of Lake Michigan. Winnetka architect William A. Otis designed the home to the East Coast couples’s exact specifications, allowing ample room for a growing family, in-house staff, and elegant gardens for summer parties.

And so it would be for more than 100 years, as three more families moved in and out of the home, each making their own modifications and writing their own chapters. In fact, for the third family, the house was a surprise gift from a husband to a wife on their wedding day, after which they lived in it for 30 years and raised four sons.

Located on prime east Winnetka property in the midst of a hot real estate market, this old home’s story could have come to an end. But thanks to another young couple with similar East Coast sensibilities, the house that Edith and Allen Haines built has been restored, expanded, and reinvented—this time, with an infusion of Vermont. “Our vision was Vermont farmhouse meets Lake Michigan,” says the wife, explaining how she, a Wilmette native, and her husband, a Lake Bluffer, fell in love with Vermont while students at Middlebury College. “We love old houses so we wanted to preserve the look and feel of the Cape Cod and honor the old home quirks but update it for modern family living.” 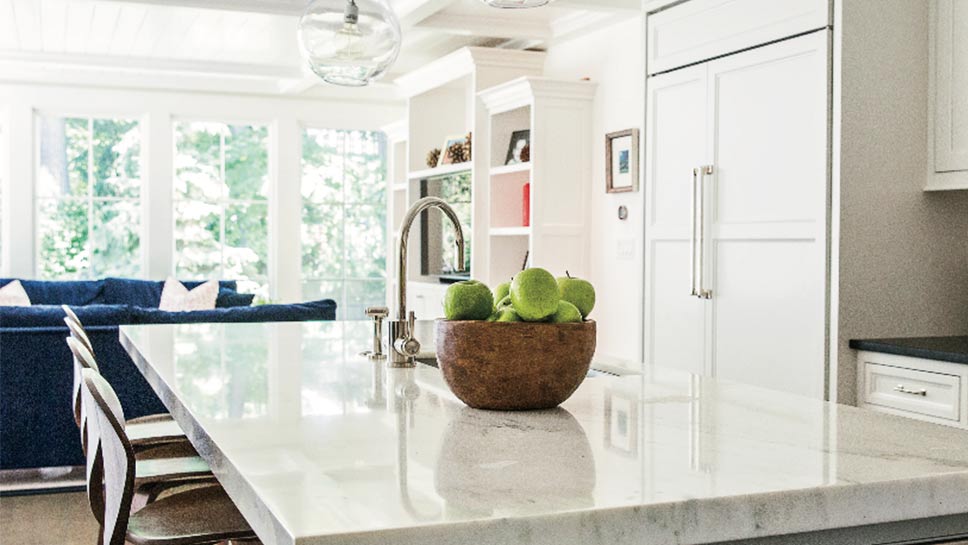 Kenilworth architect Chip Hackley was hired to reinvent Otis’ Cape Cod creation, preserving original features such as the push-button light switches and original glass doorknobs — all while relocating the front entrance and adding a new garage with an attached rear “barn” for above-ground entertaining, Vermont style.

Later this month, guests on the 2016 Cooks’ Tour house walk will get to see it for themselves. The home is one of five featured in the September 21 benefit for Rush University Medical Center’s new “Road Home Program: The Center for Veterans and their Families.”

The couple is excited to share the results of their labor of love with the community and hopes that people see that historic homes can be preserved and updated at the same time. “I love that the Cooks’ Tour is focused on renovated old homes and well-designed new homes that are contextual within our community,” says the wife. “This home had such great history. We wanted to restore it to last for the next 100 years.”

The Cooks’ Tour, a private, invitation-only event hosted by The Auxiliary Board of Rush University Medical Center, has been giving guests the opportunity to tour distinctive North Shore homes for more than 40 years. 2016 Cook’s Tour sponsors include the William W. and Pamela C. Lane Foundation, The Hudson Company (in-kind), William Blair, and The Noodle (in-kind).

The family’s Vermont farmhouse near the lake will be decked in donated foral designs and other elaborate décor customary during the house walk, but on an ordinary Saturday afternoon, it’s family business as usual.

On a recent private tour of the restoration, the couple’s young daughter is sleeping in a room upstairs. Art projects and supplies occupy a large wooden project table in the shiplap-paneled mud room. And as the husband walks in, he brings a much anticipated treasure — a newly framed blueprint of Otis’ original design for the house in 1907.

“We were very particular about keeping as much of the original detail as possible,” says the wife, adding that she thinks it’s harder for contractors to work on a project like this because it’s easier to tear out the old than preserve it. “We updated all of the bathrooms and kitchen, and throughout the home our mission statement was to achieve a simple elegance. We worked hard to find bath and kitchen fixtures and hardware that were simple but beautifully designed and made.”

When the couple bought the house in 2014, it had a total of seven bedrooms, including one that was used as a sewing room and two others that used to be maid’s quarters. They pared it down to five ample bedrooms and created more living space, including a sprawling family room and dining area off of the modern farmhouse kitchen with custom cabinetry by Amish artisans Lambright Woodworking and stainless steel Wolf appliances.

Original American heart pine flooring was preserved wherever possible, sanded down and refinished with a sleek Rubio Monocoat oil treatment. Another distinctive touch was the couple’s decision to wallpaper a powder room in the mud room/craft project area with chart maps of Lake Michigan, the Great Lakes, and other areas where they have lived and visited.

However, the feature that makes this property a North Shore one-of-a-kind might be the entertainment “barn” the couple added to the rear of the garage, complete with a basketball hoop and tennis net.

As the husband explains, finishing the basement of a 1907 house just wasn’t practical. With the ceiling heights and humidity issues, it made more sense to do something above ground. And since the couple was admittedly obsessed with Vermont farmhouses, what could be better than a barn? 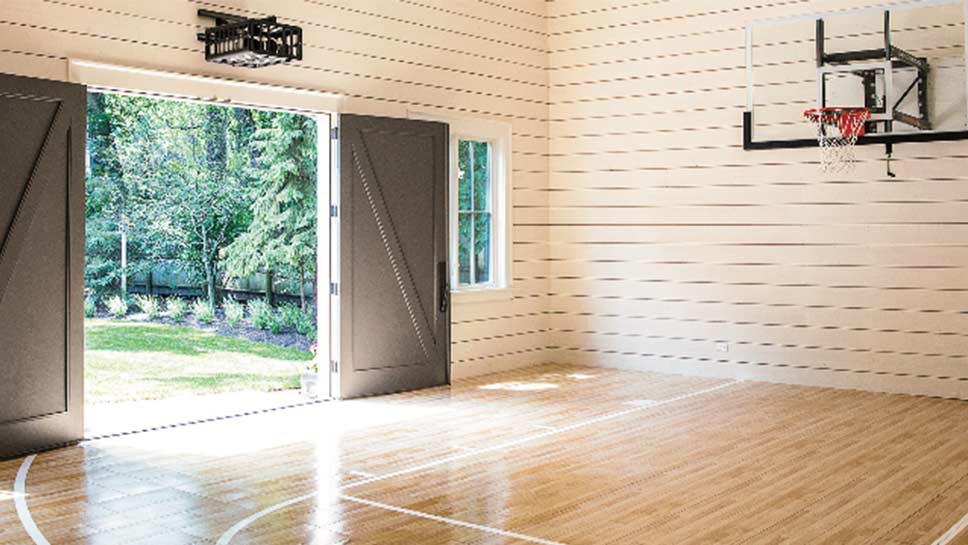 The Barn PHOTOGRAPHY BY ROBIN SUBAR

“Some people splurge on a pool or a tennis court. Our dream was to build a barn,” notes the husband, adding that the space has already been used for a few parties since they moved in 10 months ago. “This is better than a basement for entertaining because the doors open up to the yard.”

Other exterior enhancements as part of the renovation include the addition of Pennsylvania field stone and drop siding to replace the original. The yard has also been landscaped with a new patio entertaining area.

So yes, every old house has a story.

A new chapter has been written for this old house, but its history will never be forgotten.

If you are among the guests on the 2016 Cooks’ Tour, pay special attention to one corner of the living room. While the entry to the home has been relocated, the original brick tile work from the 1907 entry remains, with these words preserved for future generations of homeowners: “The house that Edith and Allen Haines built.”

For more information about the Cooks’ Tour or to purchase tickets, visit http://rushauxboard.com/ cooks-tour.