Lake Forest’s Brooke Theis hustles, hits, and never quits. Currently ranked second in Illinois and in the Top 25 nationally, Lake Forest’s Brooke Theis is taking the tennis world by storm—and she isn’t even in highschool yet. The rising 8th grader has already won a national tournament, is fully sponsored by Wilson, and has filmed a Wilson commercial that aired during the Olympics. Not bad, huh? 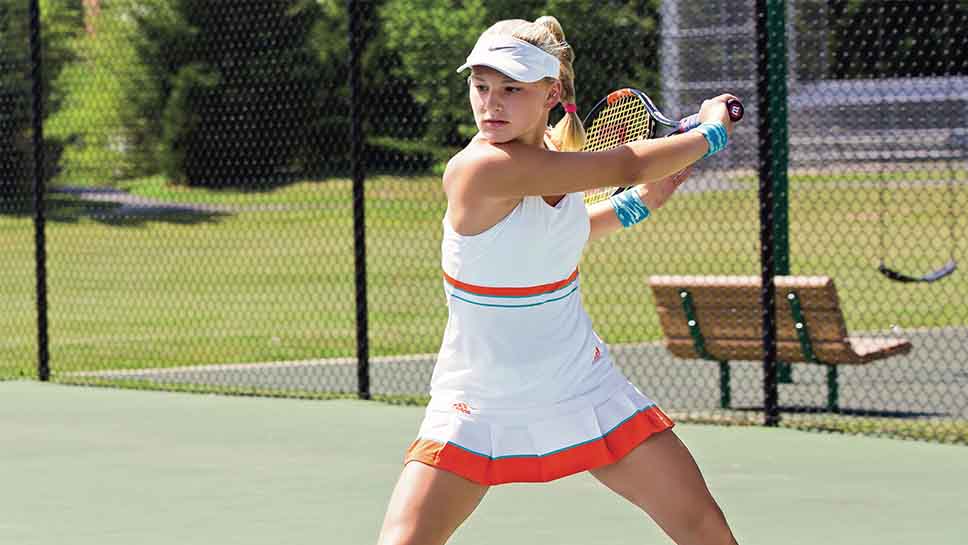 Theis started dabbling with tennis at the age of 6 at a country club. “I loved all sports and played everything with a ball,” Theis says. “The first time I played tennis I remember feeling a special enthusiasm for the game.” It was only a year later, when she was 7, that Brooke realized she loved the sport. She fully committed to the game and started private lessons in Lincolnshire.

Fast forward seven years and Theis now completes school online, an adjustment she had to make to appease her demanding tennis schedule because tournaments would force her to miss a month of classes at a time. She has made her dream a priority, which means missing out on a typical school experience and seeing her friends every day. “I have a big goal so I have to say no [to hanging out] a lot and go to tennis instead,” she explains. Although Theis carves out special time to be with friends and family, it’s a very different lifestyle. After reflecting on the sacrifices she has had to make, she adds confidently, “I think it’s worth it for sure because I love playing tennis so much and it’s what I want to do.”

The 13-year-old tennis star does indeed have a big goal. In the next four years, she hopes to play in and win Junior Grand Slam International tournaments, ranking first overall in the world for juniors. In 10 years, she hopes to be a professional tennis player on tour and ranked No. 1 in the world. “I want to be known as a player who never gives up and gives 100 percent. But even more, I want to be known as a kind and loving person because I know that when all of the tennis ends, what is really important is my character.”

An average summer day for Theis starts with waking up at 6:30 a.m. to get ready for her private lesson at 7:30 a.m. After a two hour solo practice, she goes to her group lesson for another two and a half hours. After a lunch break, Theis goes to a fitness session, another private lesson, stretching, and is done around 4 p.m. This routine is standard for the level of intensive training and travelling Theis has become accustomed to over the years.

When asked how she is able handle her busy schedule and manage her time so well, eis refers to advice from her dad:
“First things rst. I always try to get the most important things on my priority list done rst.” While most of eis’s friends are in middle school with teachers, homework assignments, and tests, eis sheds some light on how her unorthodox schedule has forced her to learn time management and independence very quickly. “You don’t have a teacher pushing you along. You really have to be independent and do it on your own.”

Outside of tennis, Theis is a young teenager who describes herself as, “bubbly, outgoing, and funny,” who enjoys typical teenager things—hanging out with friends, shopping, being with family, and relaxing off the court. “I always like to be moving and active,” she says. Her favorite class is math because she loves to solve problems and be challenged to think harder.
The bright, well-spoken girl didn’t miss a beat when raving about her favorite tennis player, Roger Federer. “I like him because of his composure on the court. Regardless of whether he is winning or losing a point, you really can’t tell. I really like his mental side to the game.”

Theis is an extremely impressive young girl with unrelenting talent. She has a clear vision for herself and does not shy away from the hard work that comes with chasing a dream as big as hers.