“The five-year survival rates for breast cancer, prostate cancer, and colon cancer are all in the 90-something percentile; with pancreatic cancer, it’s 7 percent,” says Lynda Robbins, executive director of the Rolfe Pancreatic Cancer Foundation. “Why? The mammogram, the PSA test, and the colonoscopy. We are committed to finding that early detection test for pancreatic cancer.”

The family of Michael Rolfe of Highland Park found out how frustrating and devastating the lack of an early detection test was in 1998. They watched as their perfectly healthy and active 61-year-old husband and father suddenly developed a series of baffling health issues out of the blue. After months of testing, doctors still had no idea what was at the root of his problems, until pancreatic cancer cells were found in his lungs. He passed away two weeks later.

This isn’t an uncommon story. Michael’s son, Jim Rolfe, realized that as he, his sister, his mother, and several of his father’s friends got together in the wake of Michael’s passing and formed the Rolfe Pancreatic Cancer Foundation. As the number of their supporters grew over the years, it was a story that they heard often. By the time someone is diagnosed with pancreatic cancer, it’s often spread too far to be operable.

“It’s the one fraternity I never wanted to be a part of and it’s the one business I’d love to be out of, because that would mean we found an early detection test and a cure,” Jim says. “There are probably 40,000 people diagnosed every year. It will be the number 2 leading cause of cancer deaths within the next two years. It’s a catch 22. The government won’t fund research until there are some results, but you can’t get results without some kind of funding. So, those funds have to be raised privately.”

Over the last 17 years, the Rolfe Foundation has grown from a spreadsheet on Jim’s laptop to an organization with a central office and several people on staff. Through annual fundraising events like a Speak Out for a Cure casino night, a 5K Dash for Detection, as well as events hosted by their Young Professionals Board, they’ve raised close to $8 million dollars. Funds from the Rolfe Foundation have created a lab at Johns Hopkins University in Michael’s name and increased the number of dedicated researchers there from two to 10. They’ve also increased the presence of pancreatic cancer research at the University of Chicago, where there previously wasn’t a dedication—today there is a team of six. 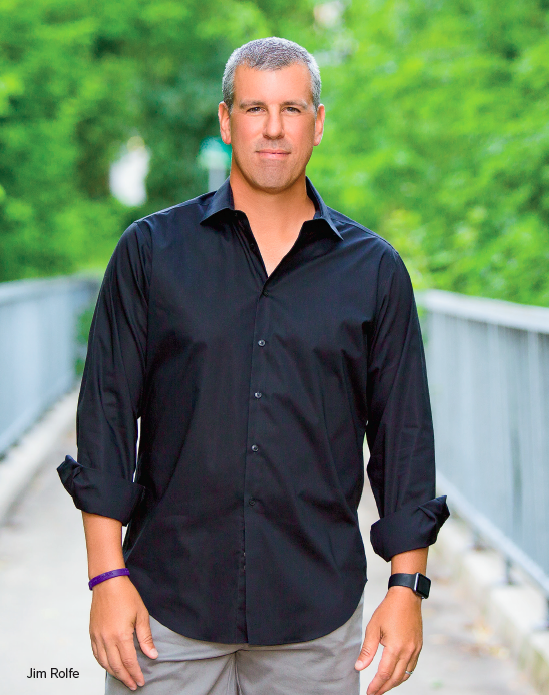 “It’s a very underfunded disease,” says Kevin Braude, the president of the Rolfe Foundation Board of Directors. “The National Cancer Institute puts less than five percent of their funds toward pancreatic cancer. So, we are trying to change that and fund the research that will make a difference.”

Held on April 17, this year’s Dash for Detection alone raised more than $332,000 dollars toward the cause. The event is a 5K-course that starts at Soldier Field and winds along the lakefront.

When it started five years ago, 300 people participated. This year, the group had grown to more than 1,700.

It was also sad to see how many people have been affected, who have had a loved one affected by pancreatic cancer.”

Night at the Speakeasy event on Saturday, October 15 at the

Montgomery Club. It’s an evening of casino games, craft cocktails, live music, dancing, food from Gibsons Steakhouse, a photo booth, poker tournament, and a premium silent auction. Not only is it a casual-dress fun night out, but it’s the chance to be an active contributor in saving a lot of lives.

“The researchers we’re working with are finding that the cancer has a gestation life of 18 years,” says Jim. “The problem is that we haven’t been finding it until 17 and a half years into its gestation.

There’s a lot of opportunity there. I feel supremely confident that within the next 10 years we will have an early detection test.”