You can feel the energy as you pass by it on the street. Lively laughter bubbles up from around two chic glass-walled fire pits on the summer patio. Trifecta Grill has a vital urban energy nestled within the streets of Winnetka.

Once through the front door, our eyes were drawn to large glowing cubes. These are the tables for a bench with a tufted fabric backing that rises all the way to the ceiling. It’s like a bench-wall next to the hostess stand. It’s all very bold and modern. The main dining room is an industrial mix of exposed brick and sleek steel surfaces.

Even the menus are mounted on brushed steel stamped with the restaurant’s name. The lighting color scheme is turquoise and orange and the wall art consists of backlit wall panels framed in glowing light. We began our evening with the delectable Taco Trio, which is new to the menu. Found under the Trifecta Trio section of the menu from which regulars enjoy trios of sliders and small plates, the taste of these tacos is really authentic, grounded in the flavor of three types of seasoned meat swaddled in corn tortillas. The pulled pork has a fantastic slowcooked, marinated tenderness, the shredded chicken hides a deceptive spiciness, and the diced marinated steak delivers a grilled, juicy beef bite. With sides of fresh pico de gallo, guacamole, and a deliciously simple cilantro lime rice, this can function as either a shareable app or an entrée for one. 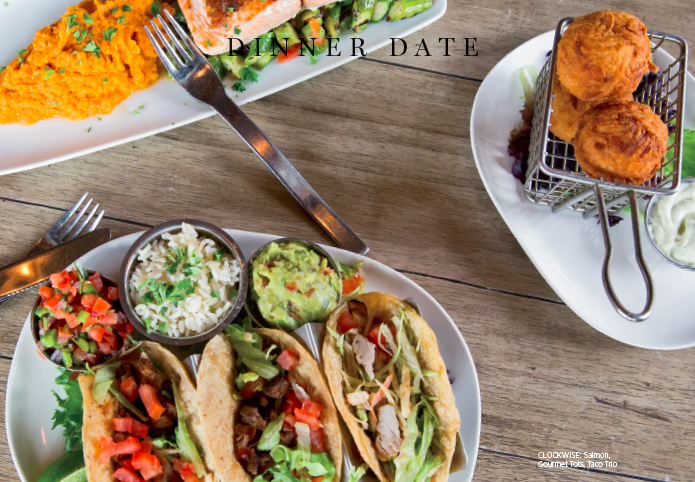 The Trifecta Signature White Pizza was our first foray into their entrées. The interplay of crisp, thin crust with layers of rich mozzarella, Asiago, and Parmesan cheeses is addictive. Something about the layering of the cheeses results in the perfect texture tour as well. The top layer is flame kissed to a golden caramelized consistency that reveals a rich and gooey Parmesan punch underneath. This is purported to be their most popular pizza and we don’t doubt it for a second.

Our second entrée, the Salmon was beautifully plated with blackened, grilled asparagus chopped like a loose slaw or salad. Between the delicate flakiness of the salmon, with just a touch of crispiness to the exterior, and the smoky tang of the greens, it’s a fantastic flurry of flavors and textures. 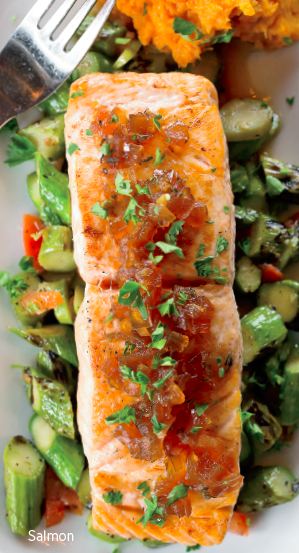 All of it rests on a bed of mashed sweet potatoes infused with cinnamon. It’s just the sweet counterpoint that the savory and buttery flavors on the plate called for.

From the Sides menu, don’t miss the chance to experience their Gourmet Tots. They’re twice the size of a traditional tater tot and taste like exceptional mini twice-baked potatoes with a crisp, fried exterior shell. Inside is steamy mashed potato chock full of the flavor of bacon and chives. It plays on all of the best textures of which potatoes are capable. Either unadorned, or dipped in an exquisite basil pesto aioli, these alone are worth the trip. They’d be just the thing to have at the bar with a beer while watching a game or to gently nudge the kids’ picky palates toward the finer things.

For dessert, the Tres Leches Cake is incredibly lush and creamy. On a pool of banana cream sauce, with strawberry drizzle, powdered sugar, and fresh sliced strawberries, it’s a dessert with deep vanilla cream tones and a fruit accent that evokes strawberries, and cream. It’s sweet, dense, and refreshing. 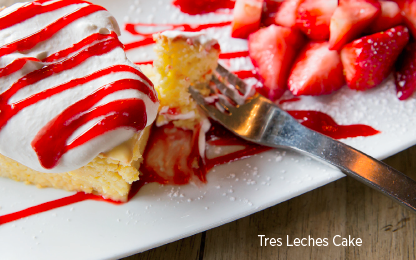 For a grown-ups night out, they have a special wine bar in the back room called the 21 Club. Again Trifecta evokes a very contemporary urban atmosphere with poured concrete tabletops, a polished concrete floor, and a giant stringy chandelier. We found our

way back to several groups of friends and dinners for two with everyone having a blast. The key here is a self-serve wine system. After putting an amount of money on a wine card, the customer has access to 28 temperature-controlled bottles of wine, white and red, in a wide variety of price points. You can choose a one-ounce taster, three-ounce half glass, or six-ounce full glass. It’s a wonderful way to taste a variety of wines tapas style or simply take control over how often your glass gets filled. Such a fun way to spend an evening out.

Trifecta Grill is located at 501 Chestnut Street in Winnetka, 847-441-1700, trifectagrillwinnetka.com.