Observing the Mayflower Ravine in Lake Forest from East Illinois Road is like walking through a corporeal before-and-after picture. On one side, you have the ravine as is usual for the North Shore, beautiful, but showing the effects of years of erosion and age—trees undercut, the roots visible as excess water removes the soil around them; a segment of a concrete retaining wall on one side, a stack of quarry rocks wrapped in wire called a gabion basket on the other, both band-aid approaches commonly applied to scoured ravines.

On the other side of the road is a recently renovated wonderland of natural stone, perfectly sloping banks, winding paths, and picturesque limestone-stacked walls and stairs. This is what a ravine restoration looks like when Roger Deromedi is at the helm.

“Since I had Jens Jensen’s original drawing and I did a current topographical map, I could overlay the two and count the lines to see how many feet had been scoured away since 1912,” says Deromedi. “It took nature 14,000 years to cut a 25-foot deep ravine, but man’s water run-off to cut an additional five feet in 100 years.” 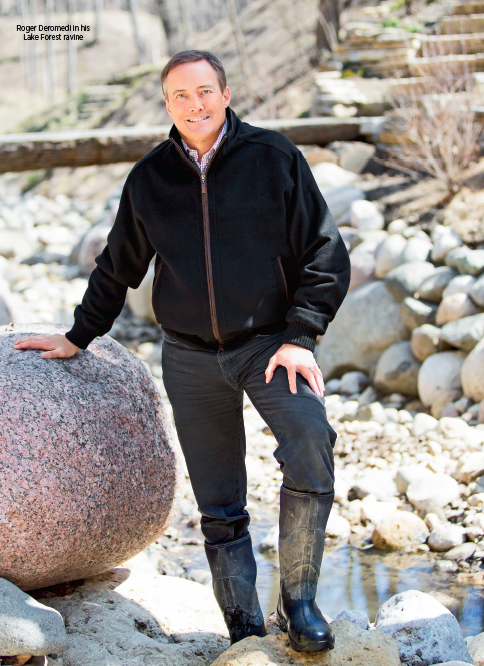 First, the team dove into damage control or stabilization mode. There is little point in restoring something if the underlying problem still exists to undo all of your work. The first issue to consider was the excess water blasting through a culvert that constantly scoured the streambed. They built a dissipation pond, widened the streambed, and added six-ton riffle boulders near the water’s point of entry to deflect and essentially pinball the water, slowing it down and making it move at a more manageable speed. Catch basins were installed along the tableland at the top of the ravine with pipes down to the streambed to stop water from flowing off the tableland and down the ravine slopes.

Next, dead or dying trees were cut down and generations of invasive species were removed to increase sunlight so native plants could grow again.

The ravine floor was raised back up to its elevation from a century ago by installing more than three million pounds of quartzite granite and quarried limestone on top of a foundation of geotextile fabric. More than five million pounds of natural stone from southern Wisconsin and western Illinois were imported and selectively placed by Deromedi and the Keno crew along the streambed to create the desired natural look. 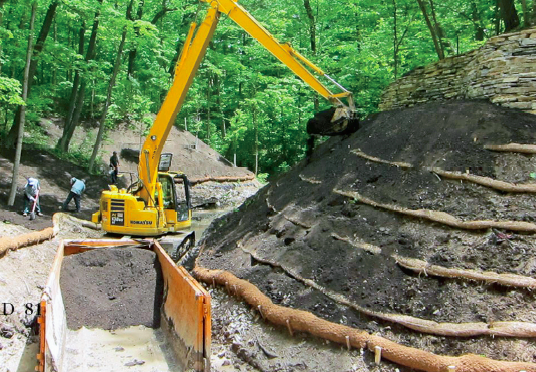 Reconstructing the walls of the ravine utilized the familiar stabilization tactic of gabion baskets, 212 of them single, double, or triple stacked at the base of the ravine slopes. One-foot thick gabion blankets were laid down on some slopes to reinforce them. All in all more than one million pounds of limestone filled the gabion baskets and blankets used.

Next came a layer of repurposed streambed clay packed up the slopes on top of the rock. Biodegradable straw logs were staked three feet apart up the ravine walls on which they spread more than 1.4 million pounds of topsoil. In order to achieve this, Deromedi’s contractor John Keno, built a custom narrow cab excavator with an extra long arm to reach far up the slope from the streambed.

Rocco Fiore’s team blanketed all of the slopes with biodegradable erosion blankets and reseeded and planted almost 30,000 native perennials, more than 3,000 native shrubs, and 275 native trees. 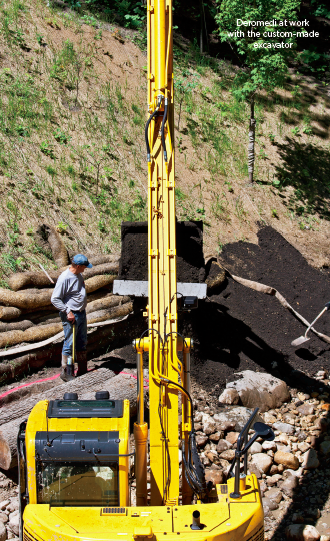 Finally, the Fiore team built a series of beautiful paths and stacked limestone walls and steps matching Jens Jensen’s designs, including several scenic lookout points with bark-covered branch chairs and a Jensen-style limestone council ring. One million pounds of natural limestone was used. In total over 10 million pounds of stone was used to complete the entire ravine restoration. Deromedi and his sons, Matthew and James, designed and built two massive log bridges that stretch across the streambed, each one half of a tree, felled from the property, split lengthwise, and bolted onto gabion baskets.

Walking the paths and looking out across the ravine, you would never know everything that it took to create the air of natural splendor stretching out below you.

“The ravine restoration was a great thing to do from both a property ownership perspective and a conservation point of view,” Deromedi says. “It will last generations.”

The entire process was completed in two phases over seven months. Prior to that, it took several years to attain all the approvals necessary from institutions like the U.S. Army Corps of Engineers, the Illinois Department of Natural Resources, the Lake County Stormwater Management Commission, and the City of Lake Forest Engineering and City Forester. 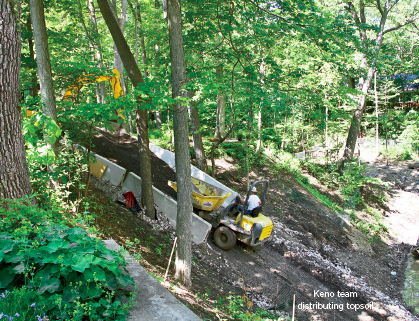 “There are so many things I learned doing my ravine,” Deromedi says. I’m glad I’m able to share these learnings for the McCormick Ravine project, which will become a wonderful park for the citizens of Lake Forest and the whole North Shore.” 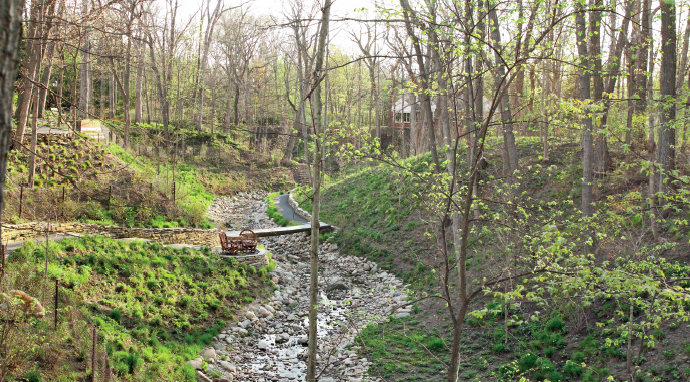