Every July, more than 300 boats line up at the shores of Chicago’s Lake Michigan as they embark on the Race to Mackinac Island, Michigan: the longest fresh water race in the world at 333 miles long, and one of the oldest, as well. What started in 1898 with just five boats has now garnered the attention of sailors worldwide, from Maine and California, to Hong Kong and Australia.

Winnetka residents Tom and Beth Ann Papoutsis are included in that cohort and have been since 2006 when they bought the 43-foot Renegade, a J133 named when Tom coined himself the “renegade of the family.” While Beth Ann didn’t grow up sailing, she had hopes that the race would be a creative and adventurous way for the family to spend time together. “I had always admired this great tradition here in Chicago, and we all love the lake,” she says. “We thought it would be a wonderful experience for our family to sail together, and the Mac race has become a highlight of our summer.” 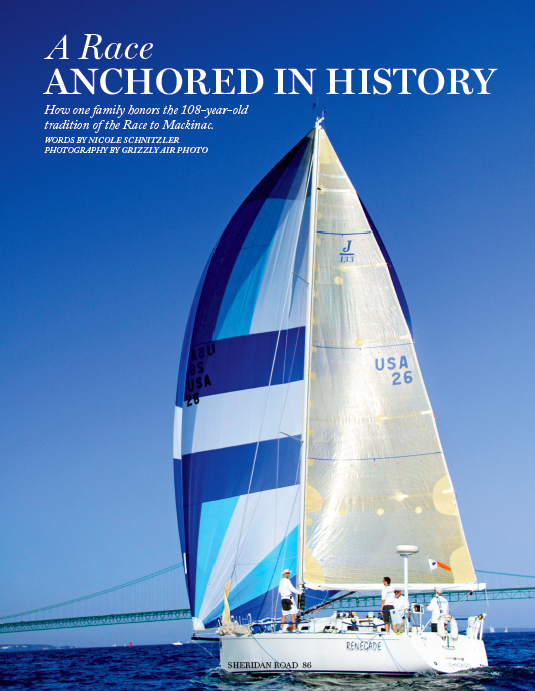 Their five children—Joey, Catherine, Paul, Andrew, and Mia are at varying stages of life and career paths, which means that the crew looks a little different each year. Still, some aspects remain consistent, including their crew chief Larry Kwiat, a long-time friend and the Race Fleet Chairman at Columbia Yacht Club with decades of sailing experience. “When you have your family and crew in the middle of the lake with gale force winds and waves battering your small boat, someone who has completed 42 Mac races is a great asset,” notes Tom.

Their oldest son Joey has also established some strong sea legs over the years—this year will be his 11th Mac race, having started his participation in the tradition at just 14 years old. Don’t let those teenage capabilities fool you, though—Tom is quick to point out that the race is anything but breezy.

“It can go from being a nice, romantic sail while watching the sunset, to being an ultra extreme sport in a flash—the weather on Lake Michigan can change so quickly,” he says, describing the foredeck position, which Joey carries out, to be one of the most demanding roles on the boat. “It’s those guys who are beating into ten foot waves in the pitch black of night with water washing over them.”

It takes a strong crew to handle those elements accordingly, while also navigating the best course to take. “The three things that determine the race are how hard you race, the course you take, and how lucky you are,” says Tom. “It’s a 333-mile race, but sometimes the finishes are like photo finishes—everything you do before then can make the difference between winning and losing.”

It’s a race that requires a crew with a strong dynamic, as well. The race takes anywhere from two to three days without breaks, a plan that results in sleeping rotations every four hours and nonstop hustle. “Our most successful year was in 2010, and we won our section that year,” Tom notes. It’s a win he credits largely to the team they put together that year, which consisted of three father and son pairs, including himself and Joey. “It’s when you have everybody in sync that you really see your best results.” Beth Ann agrees. “It’s very key to have a crew that works well together,” she says. “We’ve had some rock star sailors who have joined us, but if the chemistry isn’t right or if the crew becomes polarized, then we don’t seem to do as well.” 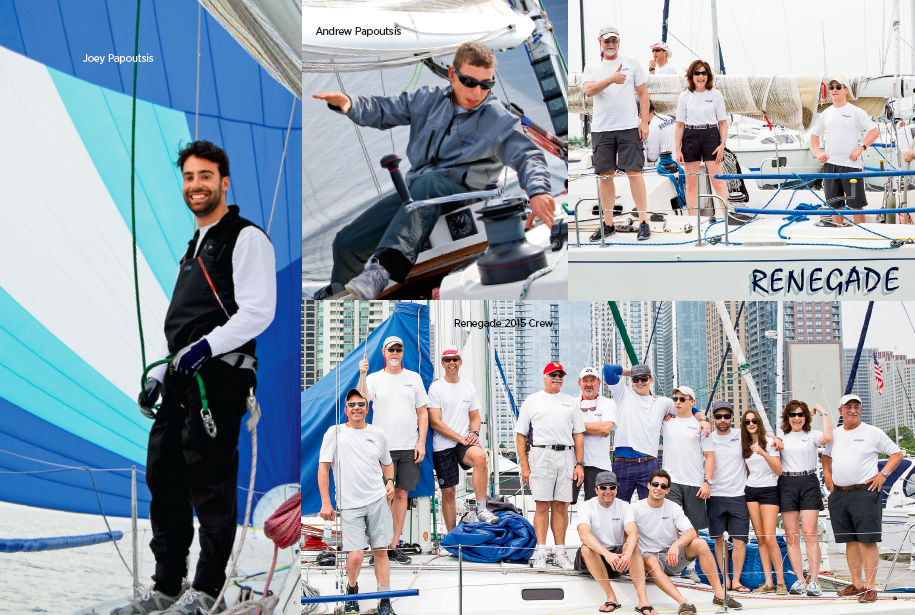 It’s one of the biggest incentives for Tom and Beth Ann to encourage the entire family to go through the experience. “I really value our children participating in this tradition because it’s such a great lesson in teamwork,” says Beth Ann. “When you have 10 to 12 people together, in a relatively small space, racing a sailboat through precarious conditions, you better learn quickly how to get along, respect each other, support each other and have each other’s backs. Those are fine lessons that Tom and I both want to instill in our children.”