“It’s one of the largest World War II airplane graveyards in the world and it’s sitting on the bottom of Lake Michigan,” says John Davies, the director and an executive producer of Heroes on Deck: World War II on Lake Michigan.

That compelling documentary, premiering on WTTW Chicago Memorial Day Weekend, tells the World War II story of how the United States Navy trained 15,000 pilots to land on aircraft carriers away from the dangerous wartime waters of the US coastline. For three years after the attack on Pearl Harbor, the skies above the North Shore were filled with planes like the SNJ Texan Navy Trainer, Grumman TBF Avenger, and F6F Hellcat as pilots learned to take off and land from makeshift aircraft carriers made from two converted side-wheel steamers. Pilots stationed at Naval Air Station Glenview and sailors from Great Lakes Naval Training Center manned the two carriers. After taking off, pilots would fly to the most visible spot along the North Shore, the Bahá’í Temple, designated Point Obo, before heading out over Lake Michigan to find and land on the makeshift carriers.

It didn’t always go perfectly; more than 100 WWII aircraft ended up on the bottom of Lake Michigan, where they sat for more than 30 years before diving teams started retrieving them for restoration. Harvey Moshman of Evanston, an executive producer on Heroes on Deck and avid member of the Chicago diving community, accompanied the diving teams and shot amazing footage of the retrieval process.

“The dive community is pretty small in Chicago, so everybody tends to know each other,” Moshman says. “I had just done a documentary about a missing American submarine with a Great Lakes connection. The salvage guys invited me out to start shooting the airplane recoveries, which presented a fascinating engineering problem: How do you pull up many tons of airplane with a small boat and bring it from halfway out in the lake, from a depth of 250 feet, to a dock in Waukegan, without damaging it?”

The aircraft recovered from Lake Michigan are some of the best remaining examples of WWII aircraft currently on display in museums like the Pacific Aviation Museum Pearl Harbor, the Air Zoo in Kalamazoo, Michigan, and the Palm Springs Air Museum.

Two of the restored airplanes are on display in Chicago, as well. 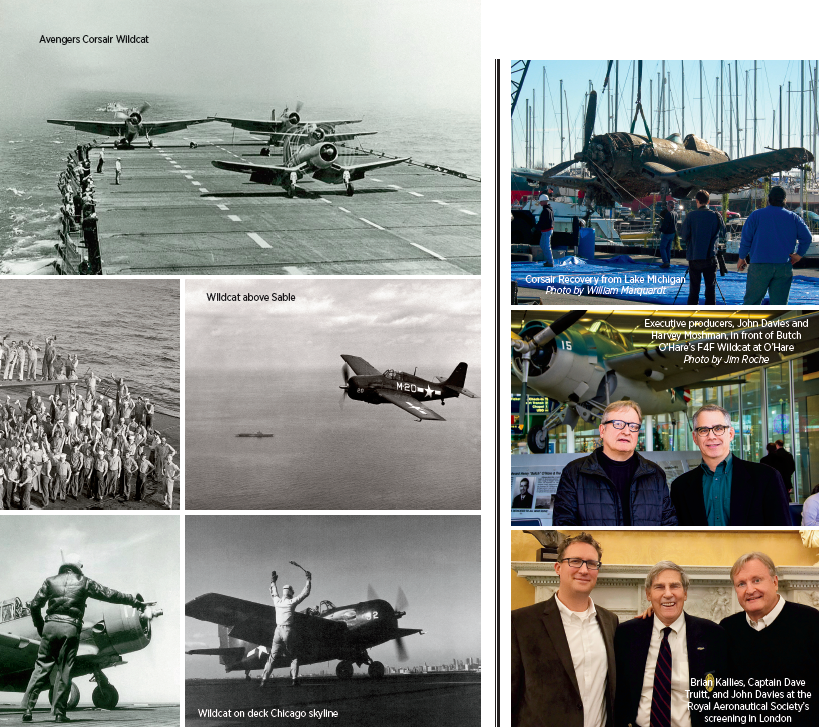 Those two narratives, the training of WWII pilots on Lake Michigan, and the retrieval of the crafts sacrificed to the process, are beautifully intercut using interviews with pilots who trained on Lake Michigan, fantastic archival footage shot of the Lake Michigan carriers, and narration from legendary newsman Bill Kurtis.

“This is an unknown chapter in the story of WWII,” Kurtis says. “My father was a Marine pilot and was trained at Quantico and San Diego. I had no idea of the volume of pilots who passed over Navy Pier and went directly to the Pacific. It’s an honor to be associated with this documentary.”

Prior to Memorial Day Weekend, Heroes on Deck is making the rounds screening all over the world. In March it screened for the Royal Aeronautical Society in London and soon it will be screening at the United States Navy Memorial in Washington DC, right down the street from the White House.

“My British Dad was an aviation enthusiast after working in a bomber aircraft factory in England during World War II, so I’m always looking for a good aviation story,” says Davies. “To find a World War II story the BBC hasn’t already told is very hard. This is a really unique one. I’m certain the people of Chicago will be blown away when they see this and realize what’s out there as they drive down Lake Shore Drive. There are probably more than 80 planes still lying on the bottom.”

Heroes on Deck: World War II on Lake Michigan, edited by Brian Kallies and underwritten exclusively by Captain Dave Truitt, Chairman of the Chicago Marine Heritage Society, will premiere on WTTW Chicago on Thursday, May 26 at 9 p.m. and Sunday, May 29 at 6 p.m. and on most PBS stations over Memorial Day weekend, heroesondeck.com.