Sometimes, it is the simplest of settings that offers up the sweetest of stories.

Such is the prose of Richard Russo, whose stories often focus on a combination of family, dysfunction, and the desire to be loved. His newest novel Everybody’s Fool is an unexpected sequel to his 1994 bestseller, Nobody’s Fool.

The Pulitzer Prize-winning author is headed to Wilmette this month for the public library’s wildly popular One Book, Everybody Reads program. We talked about the new book, his writing process, and the impact writing a memoir had on his life today. 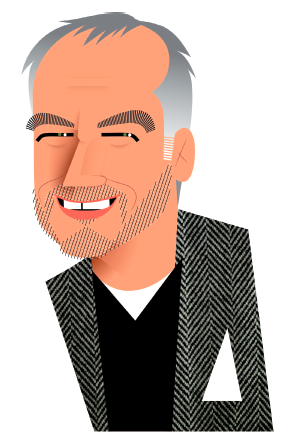 For a long time now, I wanted to write a story based on an anecdote somebody told me a good decade ago. I filed it away and let it percolate—a chief of police who suspected his wife was having an affair because he found a garage door opener in her car that didn’t belong to them. He thought he could figure out who the person was by driving around and pointing the opener at doors to see which garage door opened. I just couldn’t imagine who’d be dumb enough to put such a plan in motion. And then I thought of Officer Raymer.

Do you get asked a lot about the characters of North Bath (the setting for Everybody’s Fool)?

I get that a fair amount. Usually, the book ends when the conflict ends. But that doesn’t end the interest in the characters. For me, I bring them to life and for that time they’re as real to me as anyone else in the world. And they’re good company for me.

There is a line very early on in Everybody’s Fool, talking about Miss Beryl’s acknowledgment of an implied writer—the you you become when you write. Do you adopt a different persona in your writing?

I have learned over the years when I sit down to tell a story that I’m quite a different person as a writer than I am as a husband, father, or citizen. I don’t want to be mystical about it, but when I sit down to tell a story I navigate fictional worlds with far more authority and probably with more of a sense of optimism and humor than I am able to summon in daily life. To be able to have an omnipotent point of view, a God-like knowledge about these characters—when I sit down to write I have to have the hutzpah to know these characters better than they know themselves.

What do you enjoy most about the give and take with your readers?

I just hope they’re not too disappointed when they meet me and hear me and realize the best of me to offer is on the page. That said, when someone reads a book and loves it and wants to tell you how it impacted their lives, for me that’s the best thing—talking with people, they say the most wonderful things.

Your 2012 memoir Elsewhere was an NPR Best Book of the Year and drew back the curtain on life with a mentally ill parent (his mother). How did writing about that experience change or stay with you?

I think like so many things, it’s a continuum. She fought so bravely for so long and ultimately her demons got the best of her. And whenever she was struggling, it impacted her life and my life and of course my wife’s life and the lives of her friends and her grandchildren.

After writing the [memoir], what happened was the most difficult parts of that experience and struggle [with my mother’s illness] … a lot of that has fallen away now. It was certainly the most difficult book I’ve ever written, but the farther I get from those events, the more I can remember those parts of my mother’s life without as much of the pain. I can remember other things now, like her spirit of generosity and her wonderful sense of humor and that she was smart and brave. Now those memories are coming back. So in that sense it’s getting the parts of her I loved back again after so long.

Richard Russo will be at Wilmette Jr. High School, 620 Locust Road in Wilmette, on May 14 at 2 p.m. Tickets are not necessary for the event, and a book signing will take place following the program. Russo’s books, including Everybody’s Fool will be available for purchase. For more information about One Book, Everybody Reads, visit wilmettelibrary.info/onebook.