We’ll get to Orson Welles, Princess Stephanie, and the trainload of burlesque dancers soon enough.

They are featured players in shaping Highland Park native Lance Rodgers’ more than four decade career as a self-described “business lawyer with an expertise in tax.” That particular expertise literally put him on the map in the mid-1970s, when he was in the vanguard of establishing new structures that brought foreign money into the United States.

Rodgers, 66, is a senior partner in the Chicago firm Barack Ferrazzano Kirschbaum & Nagelberg where he is the chair of the firm’s Tax and Business Planning Group. He has been with the firm since 2006. “I am the hub of a wheel,” Rodgers says. “I guide and envision how a transaction should proceed and call into play the substantive disciplines that are required to get a client from point A to point B. I find that very satisfying, because the clients perceive that during the important junctures in their life that I am acting more as a counselor than a lawyer.”

Now, about those dancers. Rodgers’ career arc plays out like that classic role-reversal Monty Python’s Flying Circus sketch in which it is the son who is a coal miner and his resentful father an actor. In Rodgers’ case, there was no father-son estrangement. His father, Sherwin Rodgers, was a child radio actor in Chicago in the 1920s and 1930s. As a teenager, he taught radio acting classes. He did eventually go on to graduate from Northwestern University Law School, but he opened his own advertising agency, Sherwin Rodgers & Associates. He created and produced a pioneering celebrity talk show featuring his wife, Talking with Toni, which aired on WCFL radio and later on WGN TV. 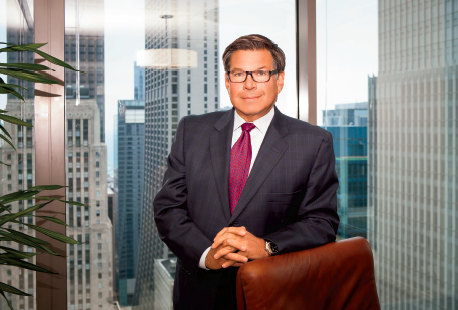 Sherwin shuttered the agency in 1962 to form Hermes Productions, opening theatrical plays Off-Broadway. “It’s a shame our careers didn’t overlap professionally,” Rodgers jokes. “Some of those plays would have made excellent tax shelters.”

Sherwin also took Broadway shows on the road, including This is Burlesque. At the age of 15, Lance Rodgers rode the train carrying the cast of dancers, comics, and entertainers to Los Angeles. It was a transformative experience, Rodgers says discreetly. “Being the producer’s son, I didn’t take advantage of it the way I could have,” he laughs. “But the experience probably motivated me to want more stability in my life and job situation. In my entire 41 years as a lawyer, I’ve been with only two firms.”

Rodgers, a Chicago native whose family moved to Highland Park in 1951, became interested in law in part after reading, Yankee from Olympus: Justice Holmes and His Family by Catherine Drinker Bowen. The law, he says, seemed “a natural outlet for me, an intellectual challenge, but at the same time not an ivory tower (pursuit) like a college professor.”

The Highland Park High School valedictorian attended Harvard College and then Harvard Law School. He began practicing law in 1974. He was 25 years old, coincidentally the same age as Orson Welles when he made his masterpiece, Citizen Kane. The connection: Rodgers’ father befriended the precocious Welles, then a teenager, after Sherwin replaced him as the drama critic for the Highland Park News. “They were close for awhile,” Rodgers says. “It culminated with my Dad having breakfast with Welles on May 6, 1941 at the Ambassador Hotel in Chicago, after which they proceeded to the opening of Citizen Kane together.”

The name Hermes Productions, Rodgers believes, was an homage to Welles’ famed repertory company, the Mercury Theatre. And the connection gets heavier, Rodgers further notes tongue-in-cheek in reference to the famously plus-sized director. “Later in his life, my father gained 100 pounds.”

Rodgers started his own career at the time of the Arab oil embargo, retaliation by Arab oil producers against American support of Israel during the 1973 war with Egypt and Syria. It was a chaotic time of high gas prices (over $1!) and long lines at the pump. The field of international tax had previously been an outbound practice, Rodgers says. “In the mid-1970s, there was this whole different paradigm; foreign capital was becoming preeminent.

This manifested itself by creating the need to have funding come back the other way. There were whole areas of tax law involving inbound transactions from foreigners. I developed some creative and legitimate structures for them to invest in the United States.”

His first successes, he says, were helping “the Shah (of Iran’s) crowd that had left the country (following the revolution) and were looking for stability in their investments. At the time, there was nothing more stable than U.S. real estate.”

Rodgers gained a reputation as a lawyer in Chicago with expertise in representing foreigners. A client with connections to the Grimaldi royal family was his introduction to Princess Stephanie, daughter of actress Grace Kelly. She wanted to establish a perfume and bathing suit line in America, as well as pursue her fledgling music career. “My wife and I became quite friendly with her,” Rodgers says. But Rodgers is not “a lawyer to the stars,” he notes. One of his most memorable and rewarding cases involved three World War II veterans who had served together in France and had raised $250,000 to replace the stained glass window of an 11th century church bombed by the Nazis. They recruited Rodgers (who speaks fluent French) to help circumvent the “bureaucratic hassles” in getting the proper permits.

In his own way, he says, he shares his father’s creative streak, but he applies it to his practice. “I view the craft and structuring (of a business transaction) as an artistic endeavor,” he says. “I lament more and more that the law is becoming commoditized and less of a craft. The incremental differences are not appreciated. I like to push the envelope, but always put extra postage on it.”

Rodgers still thinks of his single office practice as part of a 100-lawyer firm as entrepreneurial. He compares it to eating at a Michelin three-star French restaurant. “I like to think that the chef is in the kitchen and not opening his newest place in Cabo,” he says. Rodgers mostly credits his family and his Christian faith for helping him to keep fully engaged with the law and to keep things in perspective. He and his wife celebrated their 25th wedding anniversary last year. He has three children. One is in Los Angeles and is about to begin his first job after completing his MBA. The second is a senior at the University of Michigan. The third, 17, has Down syndrome. “That sure keeps me young,” he says.

“The Old Testament,” he continues, “taught me that there are limits to the law. It has made me a better lawyer in seeing that documents aren’t worth the paper they’re written on unless they are user-friendly and people have their hearts in them.”