The year is 1936 and prohibition is over. Jazz is hot, Al Capone is behind bars, and America is attempting to pull itself out of the Great Depression. Times are tough, but with obstacles come opportunity, and an enterprising young businessman named Harris Perlstein has just seized a moment in history. An empire built on his knowledge of fermentation and a partnership with the Pabst family was literally brewing, and Perlstein would need a suitable estate for his wife, Anne, and their two children.

So he bought a few acres along Sheridan Road in Glencoe and hired budding Chicago architect William Pereira to build a 14,564-square-foot Georgian home—an Art Deco masterpiece adorned with some of the finest materials and technology of the time.

Having just worked on the master plan of the 1933 World’s Fair with famed Chicago firm Holabird & Root, young Pereira was full of bold notions about the luxury home of the future. The light fixtures were Lalique crystal; the walls were made from Wisconsin Lannon stone, trimmed with Indiana limestone. There was a glamorous, Hollywood-style swimming pool and manicured Gatsbyesque gardens.

It was Deco elegant, but also modern, with an elevator, a barber shop, a gasoline pump in the garage, and a tap room with billiard hall in the basement.

And it was from the gated confines of this estate that Perlstein would not only help build the iconic Pabst Brewing Co., but would leave an enduring legacy of philanthropy that touched the lives of many.

Today, the historic property that has become known locally as the “Pabst mansion” (not to be confused with the 1890 Gilded Age Pabst Mansion in Milwaukee) is on the market for $5.64 million, ready for its next chapter to be written.

But as listing agent Christine Ashmore explains, this isn’t just another “old house,” and it’s not just another North Shore mansion.

“It’s a very special family home, and would be perfect for a couple with lots of kids,” she says, highlighting the property’s secluded location and privacy. “The yard is to die for. It’s like a fantasy yard with a secret garden. That original fountain with its cascading water is just magnificent.” 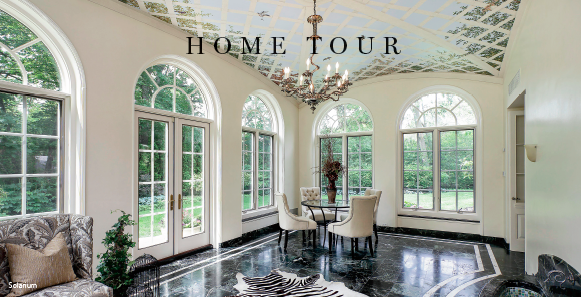 Unlike other properties of its age, the architectural details and original features of the 80-year-old home (including the barber shop) have remained almost untouched by time. And while it has retained all of the grandeur of the era—and in places is eerily evocative of old Hollywood glam (think Greta Garbo in a cocktail dress)—it’s also a very livable and functional space in the 21st century.

A third floor ballroom has been transported and reimagined as a game room and entertaining space. The home’s generously appointed 8 bedrooms and 8 bathrooms have been tastefully upgraded over time, and the 25-foot oval dining room remains as suitable to elegant holiday dinners and festive gatherings as it was in 1936. And while the most recent owner did have blueprints drawn up to renovate the kitchen, it has been updated to contemporary standards.

“That’s what’s so great about it. Those plans are available for the next buyer if they want them, but it’s a personal preference. For a historic home, there really is no work to be done,” Ashmore says. “Even the Lalique light fixtures have been restored and remain intact.”

Pereira—who soon after completing the Glencoe house went on to design movie theaters for Paramount, including the stylish 1938 Esquire Theater of Chicago—might be honored to know his flair for the dramatic detail continues to be appreciated, and preserved.

This may, however, be in part to its subtlety. While the ornamentation on columns and molding can be seen in rooms throughout the home, it is exuberant without being overwhelming.

A band of silver-leafed dentils and floral motifs on library crown molding or swooping floral capitals perched atop the living room fireplace are timeless and enduring given the Art Deco eye to modernism and simplicity.

“It is a one of a kind and a work of art. There aren’t many properties like this anymore,” Ashmore notes. Indeed.

It could also be said there are not many men like the one this particular “Pabst Mansion” was built for.

When Harris Perlstein died in 1986, an obituary in the Chicago Tribune highlighted his accomplishments in the brewing industry and his work in creating one of America’s most influential brands. He was also remembered for something that is perhaps more significant and historic.

In addition to numerous humanitarian honors, ongoing philanthropic involvement with the Jewish Federation of Metropolitan Chicago and other organizations, Perlstein’s legacy includes the creation of the Perlstein Foundation. An outstanding estate built for an outstanding man.

For more information about this estate, visit 443SheridanRoad.info.