The United States Holocaust Memorial Museum’s Chicago Teen Committee recently launched a national social media campaign called #SafeguardTheirStories to raise $75,000 for the construction of the David and Fela Shapell Family Collections and Conservation Center. The campaign, part of the museum’s national campaign, “Never Again: What You Do Matters,” seeks to preserve artifacts of the Holocaust for future generations. These artifacts will attest to the existence of the Holocaust when Holocaust survivors no longer walk among us.

In addition to funds, the #SafeguardTheirStories campaign encourages Holocaust survivors and their families to donate artifacts. These artifacts are highly sought after because they serve as irrefutable evidence of the Holocaust’s existence. The Shapell Family Collections and Conservation Center will serve as a place for scholars and researchers to study these artifacts as a way of preserving the stories of the Holocaust’s victims and its survivors. 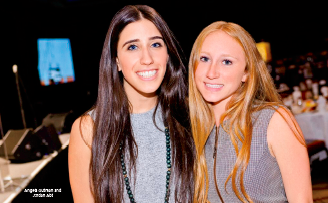 The campaign is co-chaired by two Highland Park High School seniors, Jordan Abt and Angela Gutman. Gutman’s participation continues her family’s longstanding ties to the Museum. “My grandma and grandpa were both Holocaust survivors,” Gutman explains.

“Because my grandmother never allowed her past to get the best of her, I wanted to better understand her life and appreciate her claim that she was lucky.” Gutman’s commitment to the Museum started early. “Ever since I was young, I’ve been involved. From getting friends together for a bake sale to launching a national social media campaign alongside the Committee. I feel the Museum has played a prevalent role in my life,” Gutman says.

Abt’s commitment to the museum has also been longstanding. Her family has been involved with the museum since its inception and underwrites the transportation for hundreds of survivors to the museum’s Chicago Luncheon each year. This past October, the Abt family was honored at the Chicago Luncheon for its continuing and staunch support of the museum.

The #SafeguardTheirStories campaign was inspired by the enormous success of the Ice Bucket Challenge, a social media campaign that raised awareness and funds for the degenerative disease Amyotrophic Lateral Sclerosis (ALS). Participants recorded and posted videos of themselves emptying a bucket of ice water over their heads with the hashtag #IceBucketChallenge. “We saw how social media was able to successfully reach people of all ages, all over the world, and bring them together for a good cause,” Abt says. “We loved the idea, so we created our own spin on the Ice Bucket Challenge, and connected it to the United States Holocaust Memorial Museum.” 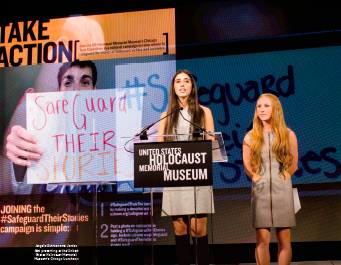 Supporters are encouraged to make donations of both money and artifacts to the Museum and to then post a picture of themselves on social media holding a sign describing why they donated and why their donation is important. All posts will be tagged with #SafeguardTheirStories and #USHMM to encourage others to join the campaign.

“I hope to continue to expand the committee and the #SafeguardTheirStories campaign during my remaining time as co-chair,” says Gutman. “When I leave for college my goal is to stay connected and involved with the Teen Committee, and encourage those who join to become passionate about telling the stories of the survivors through their artifacts.”

Donations can be made at ushmm.org/safeguard.