Before meeting Rohan Ward, my way was blocked by a growling guard dog. The not-so-menacing little white-and-brown spotted, mixed pooch had blockaded the staircase, eyeing me suspiciously from his perch. “Dougie,” called a voice—with a conspicuous Australian accent—from within an office at the end of the quarterturn staircase.

I followed the scampering Dougie, who within minutes was curled up at my feet chewing on a chew toy in Ward’s office: a place where the Australian craftsman designs his custom furniture. If this is the nerve center of his operations, I had just ascended the spine, which connects Ward’s office—littered with design books, sketches, and miniature replicas of commissioned pieces—with the expansive atelier below. A buzz saw came to life downstairs as he quietly shut the door. This was a sanctuary where someone could create in peace.

The 6’5” Ward, who looks like he’d have no problem competing for a jump ball in basketball or Australian Rules football, began explaining a typical North Shore story—something he’s no stranger to after living here for 10 years with his wife and two sons. 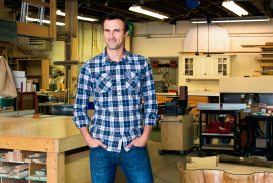 Ward was driving through Forest Park when all of the sudden he spotted a large tree trunk in a lot on the side of the road. His mind racing, he parked the car, traipsed across some Metra train tracks, and came face to face with a fence and a sign advertising Davis Tree Care. So he called the owner, who told him the log he was after was getting run through a wood chipper in the morning. “If you can turn up with a truck at 6 a.m., it’s all yours,” he recalls.

That stump is now a beautifully lacquered coffee table in Ward’s studio in Wilmette, something he describes as “tree-to-table.” It’s the very definition of a one-off, a sculpture. It’s also testament to the mastery of his craft and his creative eye. He’s got three orders for the same thing—which, understandably, could be problematic, seeing as it was discovered in a fit of spontaneity, but a good challenge to have nonetheless.

“I feel very confident in producing whatever people want: from special one-off pieces to working around problems, restoring tables, or building something from scratch,” notes Ward.

That confidence comes from a life of artistry, something Ward was not always excited about pursuing. Ward grew up in Sydney, spending summers on the rugged beaches of the Eastern coastline surrounded by driftwood-scattered beaches and the complex landscapes lush with Australian hardwoods. The son of two professional artists, he wasn’t drawn to it at first. (His mother was the head of the printmaking department at The University of Sydney where she worked for 30 years; his father is still a practicing professional sculptor and painter.)

“They essentially molded my love for furniture and art,” says Ward, with a strong touch of that infectious Australian down-to-earth nature. “I suppose as a kid, though, I had a bit of an adverse reaction. They dragged me along to exhibitions, galleries, and openings. And I was like, ‘art, shmart. I just want to play football.’”

Ward eventually found his calling, studying furniture design at Australian National University’s Canberra School of Art. There, he apprenticed under the late George Ingham, a master craftsman and world-class talent who instilled in his apprentice the artwork inherent in every piece of furniture. Over the course of his four years, half of them were spent watching his professor make one cabinet: with a level of insane, nuanced detail, bordering on maniacal.

“It was and probably still is a bit of a dying trade,” says Ward, turning over one of his miniature replicas, an exquisite, warped-looking table in his hands. “And yet people do want something genuinely made well versus the mass industry product.”

Upon graduating, Ward was commissioned to build a Japanese teahouse for a client in England “on this cliché English countryside” south of London. On his client’s amazing property, he spent seven months hand-cutting wood and constructing what was, in essence, an elaborate jigsaw puzzle of pieces. In London was also where he would meet his future wife, Vanessa, and the two were married in that very teahouse years later.

“To make it even better, she’s the first American I’d ever met,” notes Ward. She was from the North Shore, so they relocated.

Last year, opportunity came knocking in the form of the President of the United States of America. “When they called I was like a president, or the President?” he explains laughing incredulously.

In what is unmistakably the highlight of his career, a week before Christmas, the US State Department asked him whether he could build a table for President Obama to present to the French President, François Hollande, as a gift.

“I got a phone call and they told me ‘The President loves the model of your table, and he has it on his desk in the Oval Office,’” Ward told the Chicago Tribune. He had to work quickly, “literally around the clock” throughout January and February to finish the piece in time for President Hollande’s state visit to Washington D.C last February 11.“I ended up working on the table for about 350 hours,” he remarks.

Inside, he incorporated a piece of fallen oak from a tree within George Washington’s estate in Mount Vernon, as well as a replica of the key to the Bastille given by the Marquis de Lafayette to George Washington in 1790. The replica key was forged by a blacksmith and made from reclaimed steel from the Statue of Liberty using 18th century tools and techniques.

Ward was then invited to attend the state luncheon honoring Hollande’s visit. Yet one more step remained—delivering the table safely to the White House, where he and Vanessa met Secretary of State John Kerry and President Hollande. “The table is in the Élysée Palace [in Paris] for life, regardless of who’s the president,” he enthuses. A career milestone indeed.