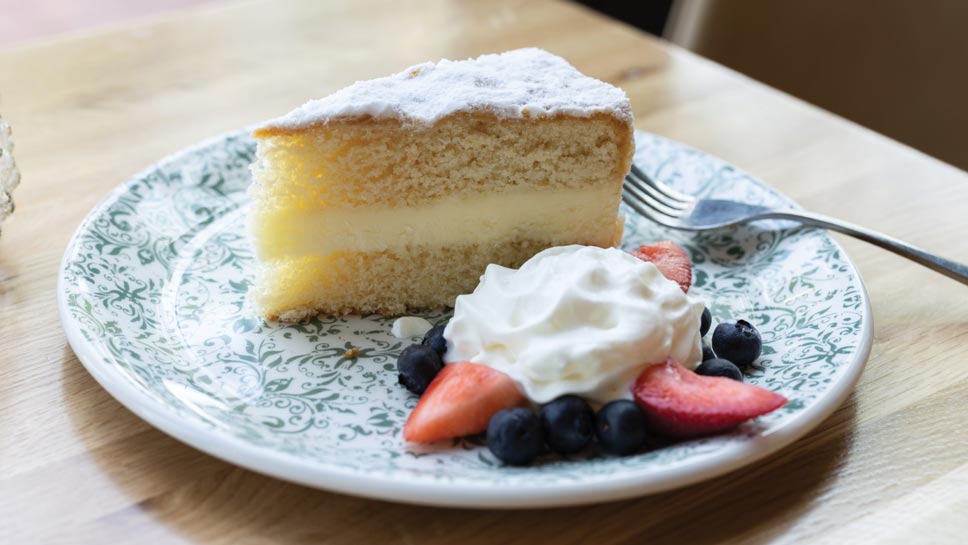 If you’re interested in waxing nostalgic about the golden age of Italian-American dining—the good old braciole and bocce ball days, when all the sauces were red and every table came topped with a carb-bomb of crusty pane, Rich Ciota can go yarn for yarn with pretty much anyone in town.

The man has restaurants and raviolis in his veins. Both sides of his family. His maternal grandfather started a meat company. His paternal grandfather ran grocery stores. His uncle owned a banquet hall where Ciota got his start, working as a busboy, before he earned his culinary school degree from Kendall College and managed a slew of Italian spots.

They’re not particularly easy to find, though. You’re going to have to snake your way to the back end of what’s an undeniable snazzy-looking dining room to get there. 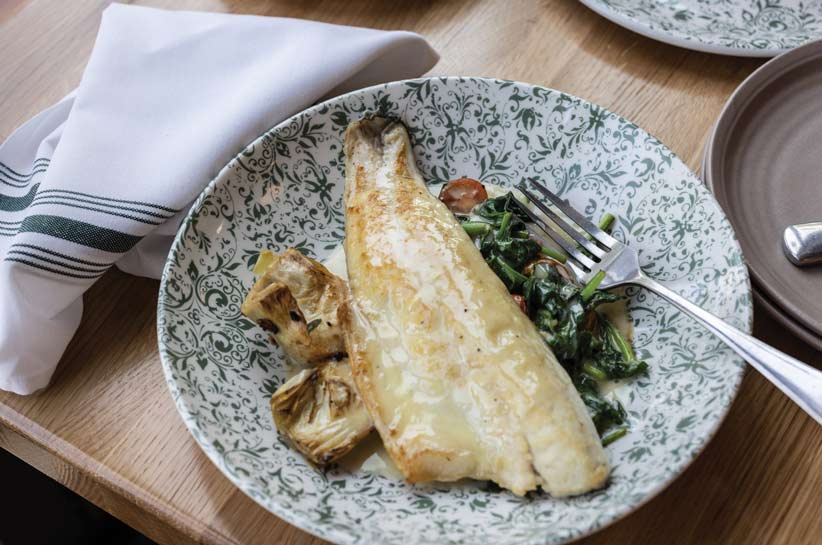 Keep on going, toward the back. When you pass beneath a bright orange Vespa, the one suspended from the ceiling, you’ll see the photos.

Snapshots of old butcher shops. An old Nonna leaning against the hood of a car. There’s an image of old men spraying down what looks like a giant bull with a garden hose. And handwritten recipes—all scrawled in Italian—for a few dishes that can make Ciota and his partner, Sam Palumbo, feel like they’re nine years old again.

It’s enough to make you hum an old mid-century modern Italian love ballad from Perry Como or Dino. But Ciota’s decision to lead with the modern glitz in the front and house the endearing memories way in the back is deliberate.

“Look,” Ciota tells me, “People just don’t eat the way they used to anymore. People still expect old-school service, but when it comes to food, you have to adapt to the times.”

And there you have it: Ciota’s secret formula. Treat everyone—“yes, sir” and “yes, ma’am”—like they’re Sophia Loren and Marcello Mastroianni. Only his kitchen is dishing up the kind of nouveau-style Italian food that diners crave these days.

Oh sure, there are plenty of old standards—bruschetta and fried calamari, and chicken parm and pork Milanese—but there’s an equal number of offerings that marry with the modern décor.

If I were to tell you, for instance, that Il Mio’s meatballs are gluten-free, what would you say? Pure apostasy? Or Thank the Lord?

Suffice to say they’d be welcome in our house any day of the week. They’re not those little marble-shaped polpette that are suddenly in vogue. They’re actual meatballs. Softball-sized and dense. They taste like a rich Italian meatloaf molded into spherical form. Plus, they come wreathed in a slightly sweet tomato sauce, which goes down particularly easy—more like a silky pomodoro than a thick Sunday gravy. 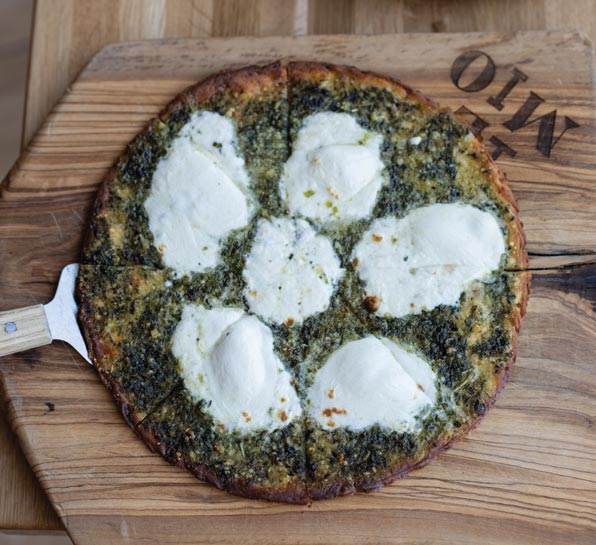 The name pinsa derives from the Italian verb “pinsare,” which means to push. The dough itself is pushed and pushed and pushed until the end product looks like focaccia cross-pollinated with a tavernstyle cracker crust pizza. They’re crunchy as breadsticks at the ridge line with middle section firm enough to hold all sorts of goodies. You can order a sausage pinsa or a mushroom pinsa, but your best bet is probably the homemade pesto flatbread blanked with burrata.

By leaning into light bodied yet richly flavored dishes, Ciota hopes everyone will view Il Mio as more than just a special-occasion spot. He wants it to be a place equally suited for a night out with family as a romantic date night. 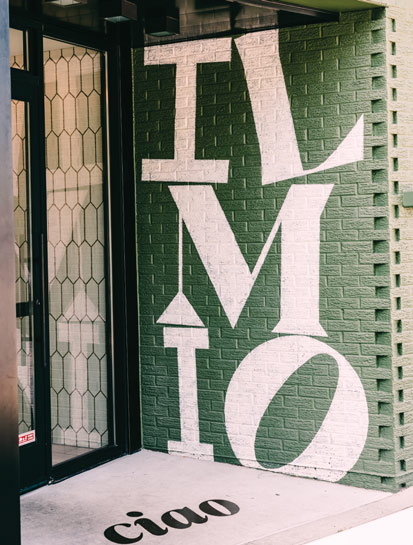 His plan seems to be working. We noticed just as many sit-down diners order the filet mignon sliders—charred on the grill, then topped with a tantalizing one-two blast of balsamic and aioli—as at the bar. You’ll certainly recognize Il Mio’s pastas— orecchietti with sausage, gnocchi alla vodka, ricotta-spinach ravioli—but you might be surprised at how light they are on your palate.

Our pappardelle with short rib ragu was pure late-2000s Cal-Italian. Sort of like a pot roast with pasta ribboned in between. The accent marks are on the sweetness of the carrots rather than the richness of the short ribs.

If there’s a dish you can’t afford to miss, it’s the branzino, which is by some miracle, made without flour. It’s sautéed in a breezy lemon sauce with tomatoes and artichokes, conjuring up that wonderfully subtle citrus flavor that one associates with Meyer lemons. 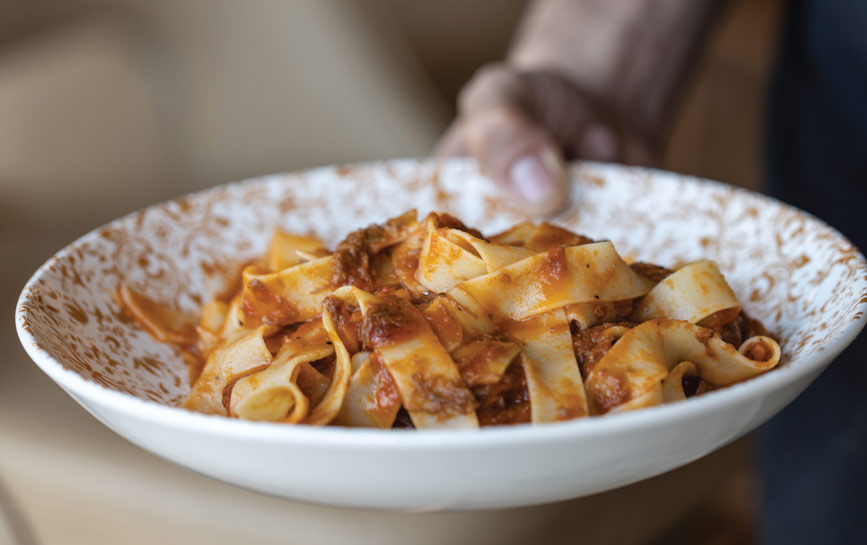 Ditto for the Italian lemon cake, which is so good that some of Ciota’s customers still can’t believe he orders it from the outside. Tastes like a first-class glass of limoncello wrapped in a crust and dusted with powdered sugar. Old World meets New World. Rustic yet sophisticated. Rich and light. Just the way Rich Ciota like it. 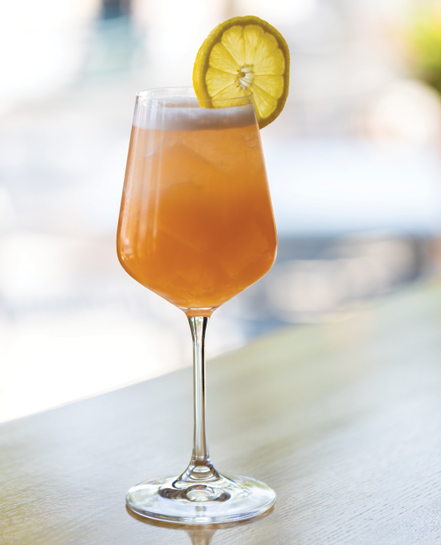 30 Spritz: Pure peach blossoms here. We loved how the undercurrent of citrus (aperol, orange blossom vodka and lemon) married so well with the toasty bread notes of the Prosecco and all that peachiness. We’d call it Better than a Bellini. 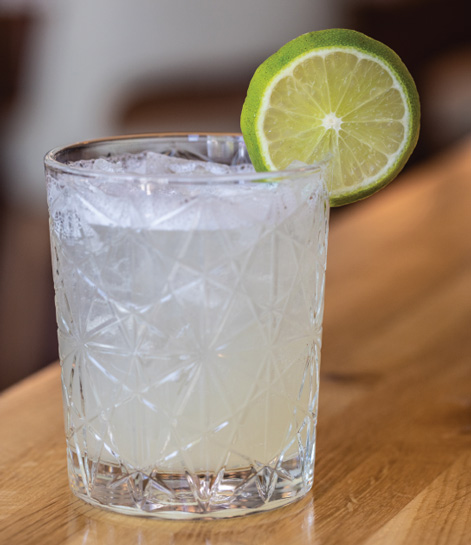 Daisy: Sometimes you take a sip of a tequila cocktail and wonder if the bartender bothered to mix anything with it. Not here: a heavy pour of Cointreau and fresh lime juice wrestle the smokiness of the Casamigos Blanco into submission.