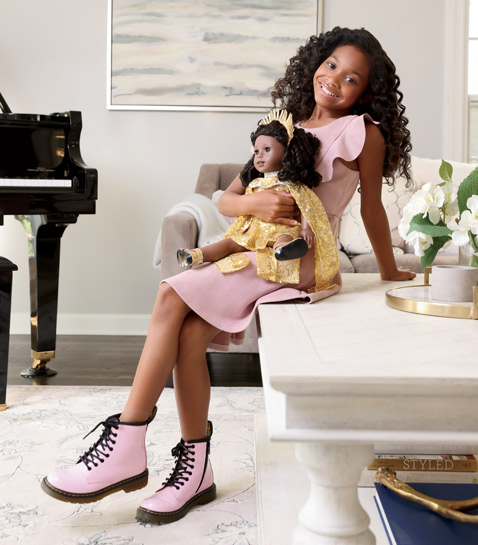 Seldom will one find Rio Lewis without a book in her hands.

“I love to read,” the 11-year-old with the beaming smile exclaims, adding, “Right now, I am re-reading the Keeper of the Lost Cities series of books because there’s a new volume coming out soon.”

The Hinsdale Middle School student then pulls the massive book out of her backpack, flipping through the pages as if she can’t wait to delve back into its imaginary places once again.

“During the process of working with American Girl, the team asked for a quick video of Rio talking about either her favorite historical figure or her favorite book,” Rio’s mom Didi Lewis says with a smile. “I knew that she would pick that book.”

What a full-circle moment for Rio’s work with the beloved brand to culminate in her likeness not only illustrating a book, as they thought it might, but that her image is the inspiration for American Girl’s newest doll Claudie Wells, and she appears on the cover of the hardcover book Meet Claudie, An American Girl, written by New York Times bestselling author of The Vanishing Half Brit Bennett, and illustrated by Laura Freeman.

“That just might be the coolest part,” Rio gushes.

Granted, Lewis’ life thus far has in fact read like a storybook of sorts, as the sixth grader has found herself in the spotlight since she was just a little girl.

“She’s been modeling since she was four years old,” says Didi, whose son RJ Lewis also started modeling at a young age and is now starring in Amazon Prime’s new series A League of Their Own. “We found out about American Girl on the first day of school this year. I dropped Rio off at school and suddenly, my phone started blowing up because friends had received an American Girl email featuring a new doll that looked just like her.”

“I think I was reading when my mom told me,” adds Rio, who is now in the trumpet section of the school band after learning how to play it during the 20’s inspired American Girl shoot.

There is much to juggle right now for the Lewis family, who moved to Hinsdale just around the time Rio was entering kindergarten. Currently, both RJ and Rio are in demand across the country for a wide array of acting and modelling jobs.

“We don’t really talk about it too much,” Didi says quietly, admitting to the fact that the American Girl story did end up taking on ‘a life of its own,’ both locally and nationally. “So, a lot of times our friends end up being surprised at what they see our kids doing.”

“One of my friends once texted me said, ‘That’s a big secret you kept,’” laughs Rio, who got to travel with her mom to New York City earlier this year to see her face firsthand, beaming all over the flagship store touting the brand’s newest character. “They never know where I might be.”

But make no mistake – the Lewis family is aware of the significance of the accomplishments of RJ and Rio, especially when they think about the fact that Rio is now the face of a black American Girl doll. 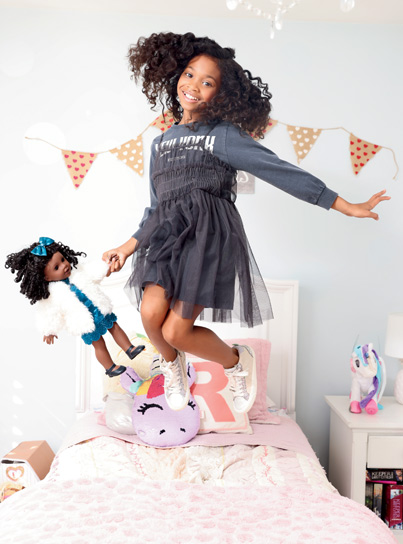 “Claudie Wells is the first black character with a positive backstory,” explains Didi of the American Girl character who grows up in the Harlem neighborhood of New York City in the early 1920s. “So, I think that’s really cool for Rio to be associated with that. For little black girls to see faces that look like them in the dolls and in the media and in a positive light? For a character to come out of an artistic period in black history?”

Didi stops for a moment to draw in a deep breath.

“It’s just pretty awesome for Rio to be a part of that.”

What might turn out to be even more awesome is the life that just might lie ahead for the talented Lewis family.

“I want to go to The Julliard School and get a degree in dancing,” a somewhat breathless Rio explains when asked what she wants to be when she grows up. “I want to act and sing and then I’m going to do some animal rights activism while I like write songs and stuff. I might also want to perform in a Broadway show while I’m in New York, and then I’m going to get a record deal and have a number one single on the charts.”

But for now, Rio’s dreams are solely focused on Christmas morning.

“I want another dog,” she says before going on with reciting of a lengthy Christmas list that also includes ‘an acrylic nail set’ and maybe some ‘fun makeup.’ “We have one dog, but she is very naughty. I’m pretty sure she’s barked in every single interview I have ever done.”