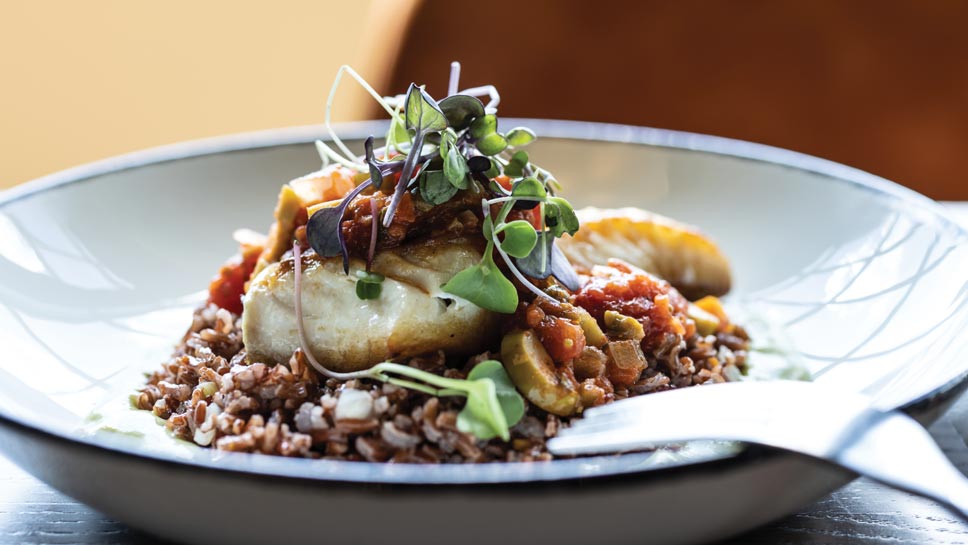 Blame it on a summer spent watching too much baseball. Or the fact that every TV, on the particular night we visited The Elm, was tuned into a dominant White Sox victory. Good food—with a side of good baseball— still have a narcotic effect on me. They send my mind drifting, like a lazy fly ball lifted high into left-center field.

At the time, we were busy devouring one of chef Eddie Jobin’s fabulous burgers—made from an unctuous blend of short rib and well-marbled steak trimmings. When an idea sort of plunked me, like a two-seam fastball a little too far off the plate.

Sitting there, enjoying the breeze and my burger, my thoughts snapped back to that undeniable great line from the two-hankie Kevin Costner classic Field of Dreams: If you build it, they will come. You remember that scene? Warm summer night. An apricot sky. Costner is shuffling though shoulder-high cornstalks somewhere in Iowa. And suddenly seven spectral words—each syllable stretched out for dramatic effect like warm saltwater taffy—whisper into his ear: If you build it, they will come. 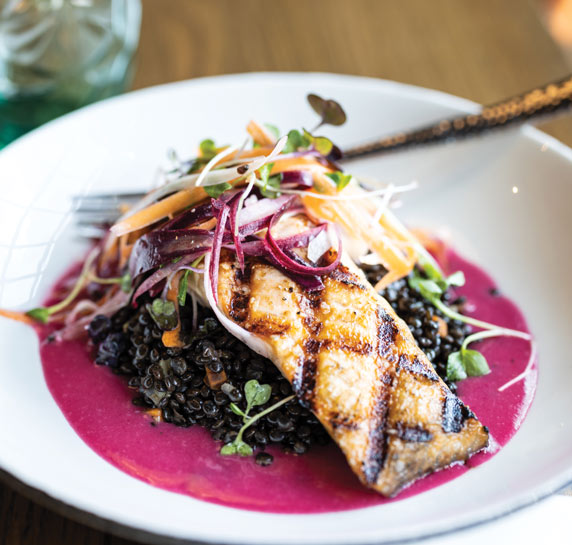 I’d like to imagine that Dan Spain, the owner of The Elm, must have strolling through downtown La Grange one night and heard a similar incantation. “Build it, Dan,” his inner entrepreneur must’ve whispered, “and they’ll all come.”

The “it” in question? Not a baseball diamond, but an absolutely gorgeous rooftop dining space that’s become the undeniable centerpiece of the restaurant. It’s Valhalla up there on a temperate night. Half of it sheltered, with fans re-circulating the breeze, and the other half exposed to the elements. It’s fringed with pops of green. Hanging planters. Potted plants. Pails filled with flowers. Plus string lights. 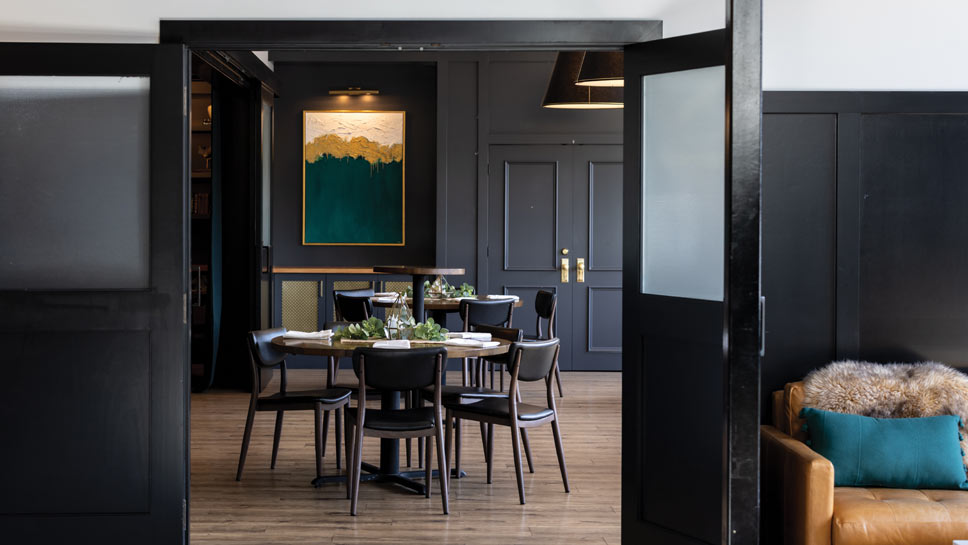 Moody elegance at The Elm

It’s comfy with plush couches and tables that don’t wobble. Not to mention a second-story bar built so close to the action it’ll deliver you cocktails before your tumblers can even think about breaking a sweat.

Just about every guest who sets foot in this place approaches the hostess stands and asks if they can eat upstairs. So yes—no suspense here—Spain has hit a homerun with his rooftop. But in everyone’s rush to gallop up the stairs, perhaps not enough praise has been given to Jobin’s rock-solid menu.

Then again, I’ve got a soft spot for a homespun dinner list that tastes more nuanced than it reads. You’re unlikely, for instance, to come across anything on The Elm’s menu that you haven’t seen elsewhere. 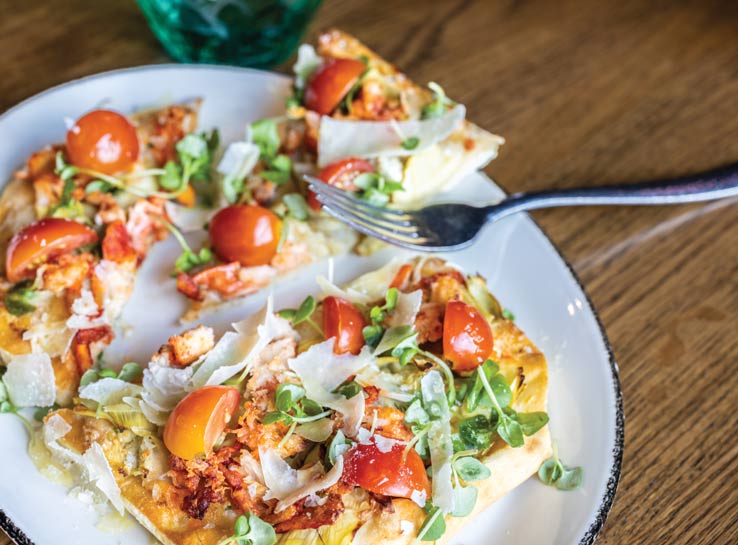 But kudos to Jobin for putting some serious thought into how he can exceed expectations. Take that delicious burger of his, for example. It doesn’t look any different from your typical pub special. It’s thick and circular, shaped like it’s been formed in a ramekin. Melted American cheese. Herb-spiked mayo. A fluffy potato bun.

Bite into it, however, and you might need a bib, given how freely the juices run from its juicy core. I’ve cut open farmer’s market tomatoes that gush less than these burgers.

So what does Jobin do that I don’t back at home? He thinks like a butcher. The key thing to consider, Jobin insists, isn’t just the fat-to-meat ratio but rather which cuts of meat are being ground up to produce that ratio. Lean sirloin with some fatty scraps thrown in will not taste anything like chunks of short rib and real steak trimmings. Plus, he’s factored in a host of variables—ask him to regale you with his treatise on the effect residual steam during the cooking process—that most chefs leave for the National Association of Food Scientists to debate about. 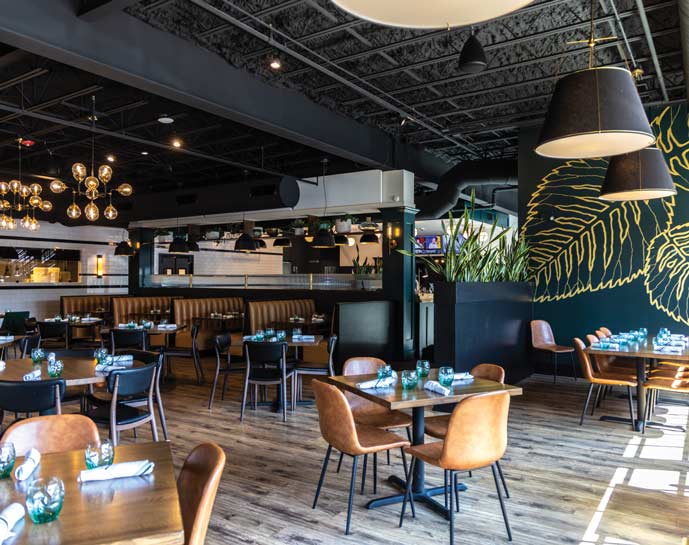 You also have to appreciate a chef who’s downright punctilious about sourcing his seafood during periods when it’s not only affordable but at the zenith of its flavor. I can’t assure you, for example, that our two delicious seafood entrees—a parmesan-crusted sea bass or a moist slice of pacific halibut—will even be on the menu by the time you read this because it’s quite possible that Jobin will have moved on already.

He rarely, for instance, buys seafood during the first or last week it is available to him. Why? Because early on, the prices are too steep to serve a hearty-sized portion. And later in the cycle, most of the really good purveyors are already focusing on the next big catch of the season, reducing the odds he’ll get the quality he demands.

Our advice in navigating The Elm’s menu? Look for dishes that rely on bold sauces and accouterments. Jobin has a talent for mellowing out pungent flavors that, in other hands, might scare tepid diners off. An artichoke-olive salad, for instance, is generally an acquired taste, but the one he pairs with his octopus app tastes like a smooth and lean puttanesca. And the kitchen’s lamb chops are devoid of any Old Spice muskiness.

These chops, dare it be said, are almost sweet, thanks to the application of a pomegranate reduction that counterbalances the lamb in much the way a plummy Zinfandel might. Ditto for the candied bacon notes in the tangy sauce that accompanies his striped bass. 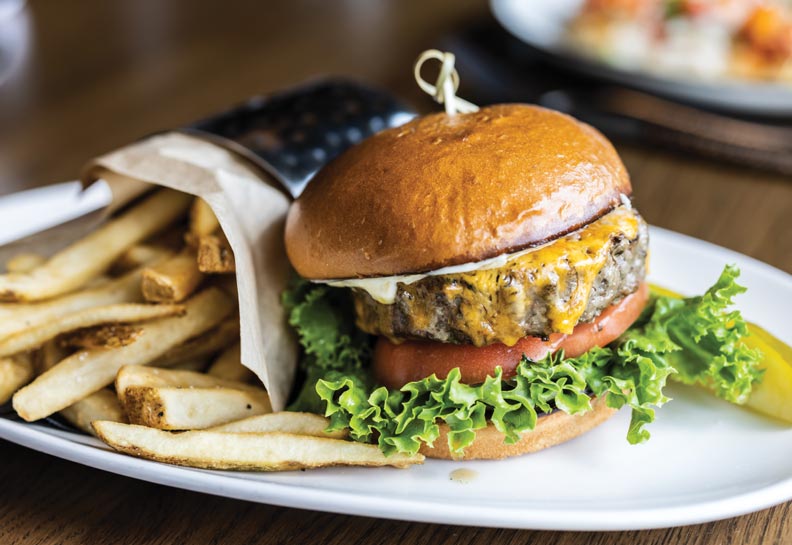 Truth be told, on our most recent visit, we politely declined an opportunity to eat upstairs to the rooftop. Sitting down there, all cozy on the first floor, in a space that pairs dark greens with a shiny brass glow, we made a discovery: Turns out that some things taste just as good close to the ground as they do in the clouds.

A strong cocktail list, which leans into fruits and citrus, artfully complements The Elm’s casual menu. 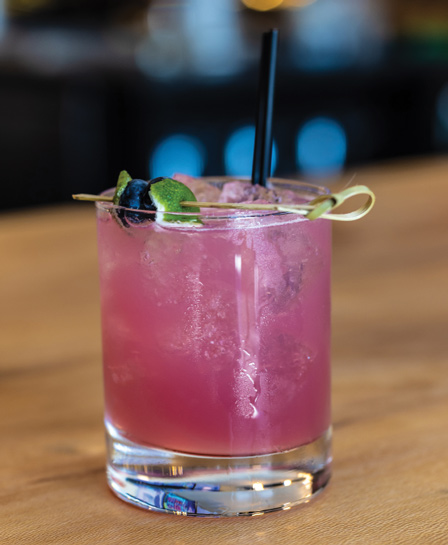 The Griffin: Looks like a sloe gin cocktail but tastes like a slightly tart blueberry pie. The beautiful fuchsia color is a result of Skeptic gin being infused with blueberries and then cut with a tart squeeze of lime. 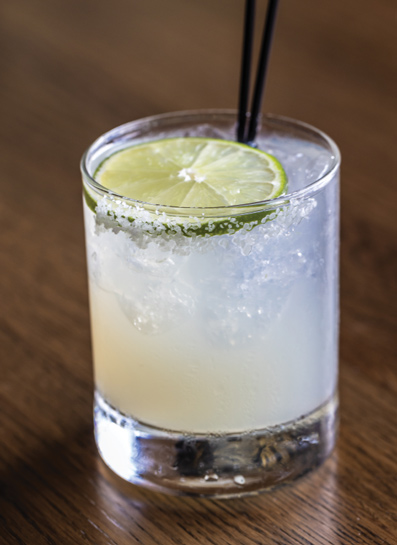 Skinny Margarita: A regular old skinny margarita? Often boring, but this variation is made with Milagro Silver Tequila, Magdala orange liquor and monkfruit simple syrup, which produces a smooth and tangy winner.