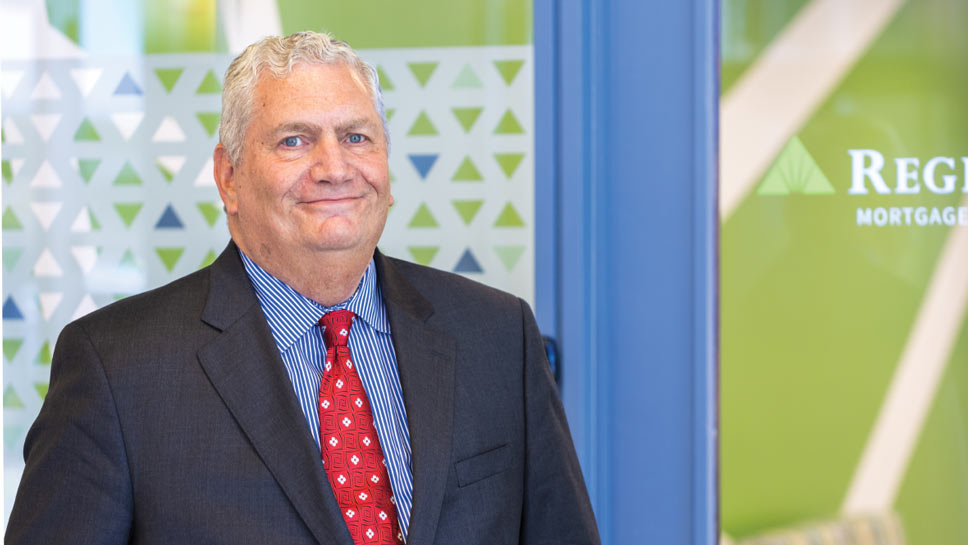 Out of his Regions Bank office in Oakbrook, Vice President and Mortgage Production Manager Howard Ackerman oversees a team of mortgage originators who offer a wide array of mortgage products for those who are buying or remodeling their homes, purchasing their first homes, or purchasing vacation homes.

Born in New York City, Ackerman received his BA from Brooklyn College and an MBA from Baruch College of the City University of New York before starting his career as an appraiser. Along the way to a 35-year career in mortgage banking—still going—he studied for his Six Sigma Green Belt Certification at Purdue University. A little over four years ago, he landed at Regions Bank in Oak Brook. “I’ve spent close to 34 years, 20 of them in the Chicago area, in senior positions running lending divisions,” Ackerman says.

“I’ve been with Regions now for four years and it’s a great, great place to be.”

Regions Bank was established in 1971 when three banks in the Birmingham, Alabama area merged, including two that had been established in the mid-1800s. It remains based in Birmingham and operates 1,500 branches in the Southeast and in the Midwest. While the bank does not operate retail branches in Illinois, it runs a strong mortgage banking business in Northern Illinois and a commercial bank in downtown Chicago.

The foundation of the bank’s mortgage business is building strong relationships with clients. Ackerman says it’s important when a bank is operating in a community to go about its business in a way that improves the communities where it operates.

Laws that govern the banking industry require some banks to make loans such as mortgages as a way of reinvesting in their communities. Regions doesn’t just view this as compliance, but as a business opportunity. The bank is an affordable housing lender that can offer loans with no mortgage insurance to people buying homes in low- and moderate-income areas.

Because not all families looking to buy their first homes will initially qualify for a mortgage, Regions is there to help by providing credit counseling and other resources that can speed up the path to homeownership.

“It’s not only good business but it’s a really good feeling to help families create sustainable home ownership,” Ackerman says. “If we’re going to provide a mortgage so that they can raise their families in a home of their own, we want to make sure that they’re in a position to succeed.”

Other Regions mortgage programs include Jumbo mortgage loans up to $5 million, loans to doctors and dentists and emerging professionals for purchase and residential construction loans where Regions will work will buyers and their builders to establish a permanent interest rate throughout the construction project and the life of the loan, an attractive option given the current construction boom and interest rate environment. All the bases are covered.

Ackerman, who holds the Certified Mortgage Banker (CMB) designation and is a past President of the Illinois Mortgage Bankers Association, says his time in Illinois has brought many experiences that contribute to his work at Regions.

“I’ve been very much involved with the industry here in Illinois for a long time. We all know each other, and we compete, but we have a set of guidelines by which we do that,” he says. “The key to our success is the foundational core value of always putting our customer first in everything we do.”