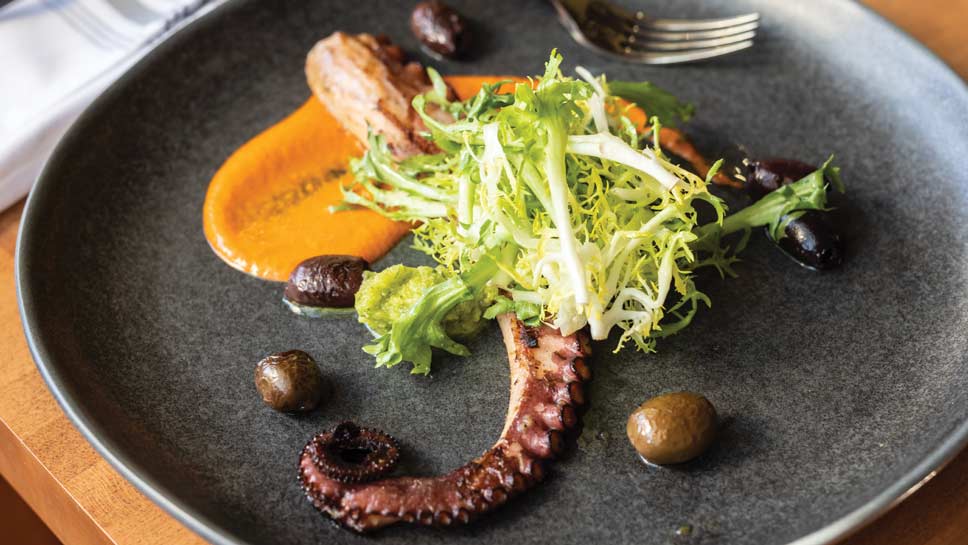 You can literally smell it, sweet as Juicy Fruit, wafting its way toward you from a block away. Long before you ever swing open the front doors to Kindred in downtown Elmhurst and grab a cushy seat near its huge open-hearth kitchen, that deliciously sweet scent will guide you to where you need to go.

Smells like sugared firewood—more nuanced than the fires dear old dad used to get cracklin’ when you were younger. This is the aroma, one imagines, that an expensive Pinot Noir would release if someone had the temerity to pour it straight into a smoldering campfire.

It smells like summer. And really good open-flame cooking because, of course, that’s exactly what it is. Those inviting aromas are the product of chef Michael Carroll, formerly of Band of Bohemia, burning cords of cherry wood, hour after fragrant hour, in the restaurant’s Argentinian-style grill. The fire burns. Flames spit. Heat crackles. Searing, warming, and crisping up all manner of delicacies pulled from field and stream alike. 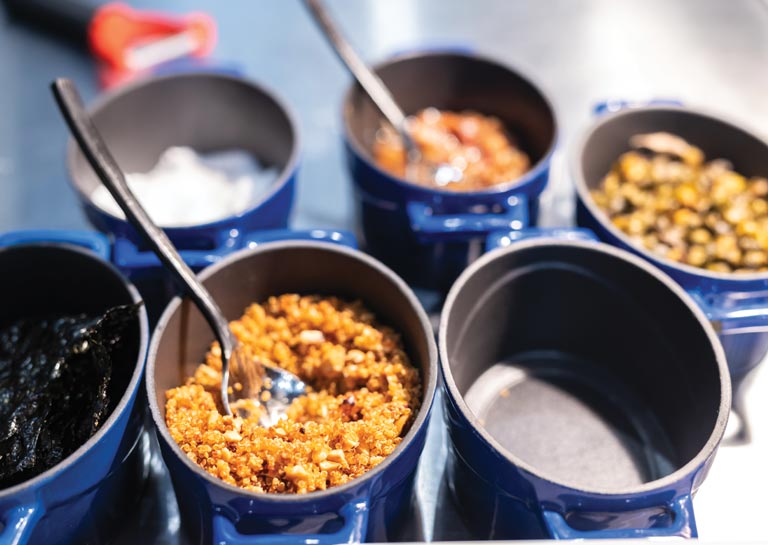 Every time Carroll twirls one of the grill’s signature wheel-shaped controls, a grate either descends closer to the fire or elevates away from it, delivering different gradations of intense or gentle heat.

Pretty much everything that requires heat is cooked on that sweet, sweet grill. Seared strip steaks with charred ripini. Tender slices of juicy duck dressed with pears and pistachios. Planks of plump salmon enveloped in contrails of fruity smoke. And medleys of vegetables—gardens and gardens of them—that might include beets topped with candied walnuts one day or slow-roasted carrots crowned with a sweet-potato pie crumble the next. 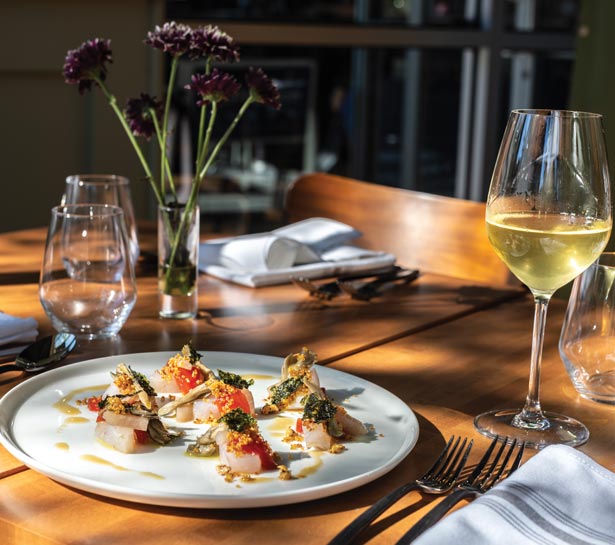 Owner Tom Trenta is, deservedly, proud of his grill. He had its surrounding hearth built, brick by brick, all while he oversaw the construction of a special airflow system that releases all that bing cherry-scented smoke into the surrounding area rather than backdraft it inside.

Trenta, who learned about the food game by running creative agencies that often represented restaurants, doesn’t brag about his new toy the way some folks prattle on about their shiny new “midlife crisis” Ferrari.

For Trenta—a Midwesterner through and through—that oven is a means to a greater end. “I just feel like food tastes better over an open fire,” says Trenta. “And I liked the idea of a restaurant that could bring people around a fire all year long.”

Which is, of course, what makes Kindred such a find. Carroll and Trenta are not trying to import California-style campfire cooking to Elmhurst. Nor are they trying ape Francis Mallman’s distinctly Argentinean take open-fire barbecuing. Kindred’s menu, by contrast, celebrates Midwest flavors and Midwest ingredients, while challenging diners, ever so gently, to wonder what “glamping-inspired” fare might taste like if served in an elegant dining room close to home. 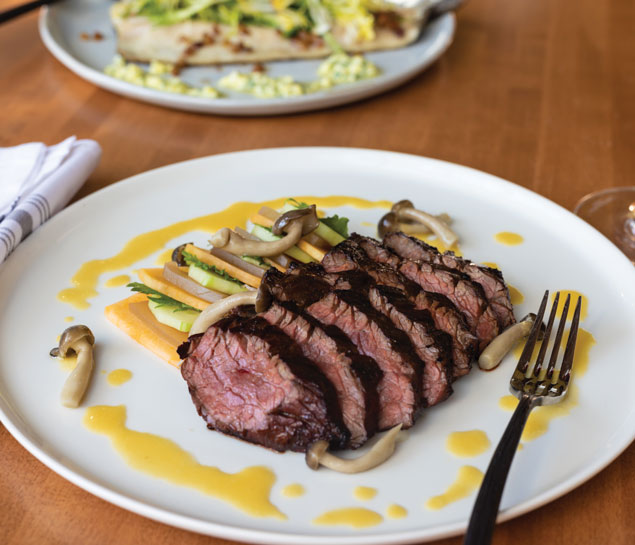 What if, for example, one took a hanger steak, seared it carefully, and then paired it with an unconventional array of summer fruits. Watermelons. Cucumbers. Honeydew. All cut diaphanously thin. The result, at Kindred, is a study in contrasts. Bold umami-like steak notes counterbalanced by wispy ribbons of fruit that dissolve like cotton candy on the tongue. It’s a picnic basket fare cross-bred with a backyard grill-fest.

And what if, given this emphasis on hypotheticals, one sourced walleye plucked from the Great Lakes but refused to give it the Wisconsin supper club treatment? Imagine that walleye kept cold and raw, then bundled up with a pickled pears, tamari-dressed watermelon, and crispy bits of quinoa and hazelnuts. The result: a delicious example of Great Lakes-style sushi or Midwestern poké that’s bracingly bright yet subtly briny. 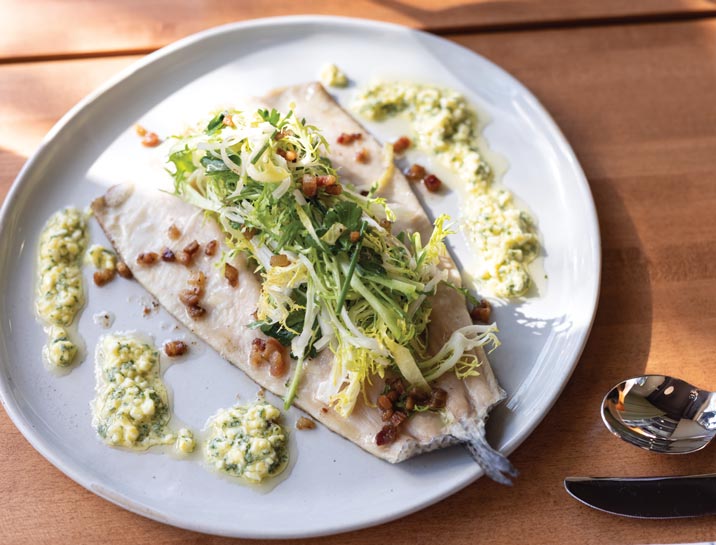 There’s plenty more to sample, of course—offerings Trenta hopes will make people whisper one of his favorite phrases: “elegantly casual.” When you flick your fork into his ultra-tender trout topped with greens, pancetta and a gribiche-like jumble called eggs mimosa, Trenta hopes you will see the dish for what it was intended to be: Not avant-garde city fare, but creative suburban fare with a Midwestern soul. Food that’s just interesting enough to make diners think, “I’d certainly never be able to make that at home.”

Kindred, in other words, is a tribute to our home—one from the heart that honors the bounty of our American Heartland. 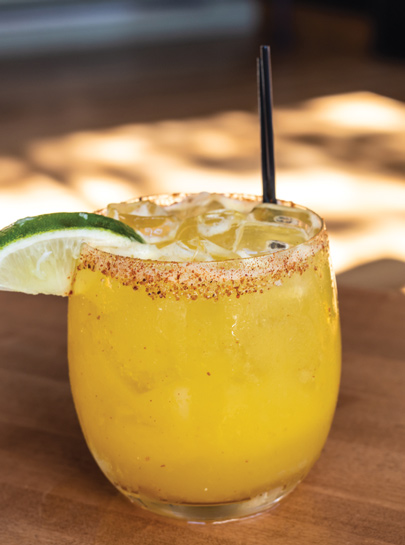 Spicy Orange Margarita: This smart take on a margarita doesn’t overdue the heat. It might look like a liquefied habanero, but the smooth undercurrent of citrus makes it a great pre-meal palate-charger. 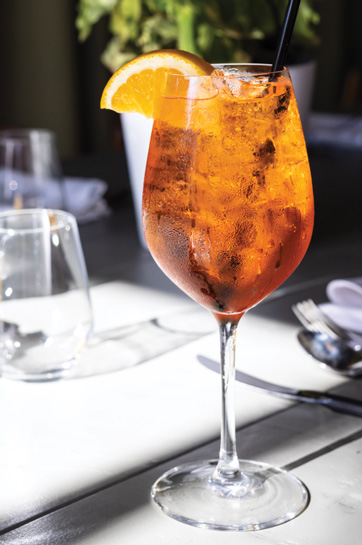 The Tease: Imagine a spiked Arnold Palmer with a decidedly British lilt. You’ll detect a strong mid-day teatime vibe but just the right blend of lemon and bourbon makes it a sophisticated drink that pairs well with beef and steaks.