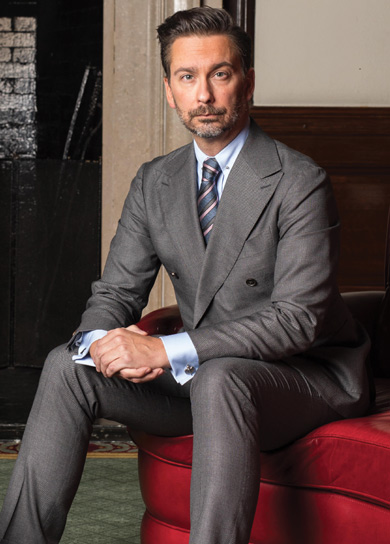 I once spent 45 minutes in the DuPage County Courthouse arguing over the allocation of a Margaritaville® Frozen Concoction Maker. That device (it was the three-pitcher “Tahiti” model) is readily available at local stores and online for the reasonable price of $559.99. I can assure you that between myself and opposing counsel, our combined fees for that exercise well exceeded the fair market value of the beverage machine itself. Why did that simple household product matter so much to the parties involved? It mattered because it was deeply personal. It mattered because that drink mixer held memories, not just margaritas.

To understand how they ended up in Court arguing about appliances, one should know that the spouses in that particular case entertained guests frequently during their marriage. Their home had a large back yard with a sizable pool and very lovely outdoor furniture. An array of gleaming grills and stunning smokers completed the idyllic scene outdoors, and were also a subject of their divorce dispute. Even the lawn mowers, trimmers, and other garden appliances were additional topics of zealous advocacy in the litigation. The parties could have easily afforded to purchase a second set of everything about which they fought. But each one of those items was a totem of sorts, a repository of moments now long gone – a reminder of parties, anniversaries, birthdays, graduations and blow out events they enjoyed at their home. The fact of their fixation on these material items of metal should activate our empathy, because we are all susceptible to such attachments in one way or another.

Recently, I was talking about the psychology of issues like this with a very experienced and emotionally intelligent mediator/ former Judge in the city. She often refers to this kind of displaced attachment as “anthropomorphizing.” It is ascribing a form of humanness to the material and non-organic – typically items of personal property. In divorce, much like when a close relative dies, artwork, clocks, furniture, and other items of tangible personalty often become imbued with outsized importance relative to their objective value. No matter the incomes involved or the size of the estate, almost every family law case presents at least one object that becomes a focus of the spouses’ mimetic conflict. And while litigants’ pitched battles over parenting time and custodial rights have a certain logic to them, the mud wrestling over tchotchkes does not, at first blush, until we unpack what is driving it.

The French philosopher, Rene Girard, posited that mimetic desire and conflict are at the root of human experience and life. In very simple terms, we often want things because others want them and we often do not want things that others do not want. Our desires are often not fully our own, but instead, they arise and attach by reference to third parties. Because of this, we often find ourselves in an environment of conflict and rivalry. For Girard, these desires are mediated (not in the legal sense) and they are reinforcing in a triangular fashion. In divorce, the complex stew of difficult emotions that husband and wife are grappling with often drives mimetic conflict and leads to the disputes like the one described here. In the case of the frozen drink machine, it represented something particularly meaningful to the spouse who used it most. Seeing the nature and degree of attachment being shown, the other spouse then developed an entrenched commitment around the device. The desire for the object was really a desire for something bigger.

Spouse #1 was the party-thrower and extrovert in the marriage. But when Spouse #2 (who was quieter and more introverted) saw the degree to which the mixer was seen as attractive, this person then became fixated upon obtaining it and denying it to the other party. The reciprocity of their desire operated to escalate the issue. In truth, Spouse #2 wanted to be more like Spouse #1 in some ways. The introverted spouse had always navigated the social world through the efforts of the extroverted spouse. That was ending with the divorce. And that mixer was full of the emotion and feeling and meaning that came from that family dynamic.

For all of us in family law matters, as lawyers or litigants, it is not always easy to figure out what people really want and why. Many clients are not equipped to fully mine their minds and hearts to arrive at those answers. Sadly, many lawyers are equally ill-equipped to navigate the complex terrain. Ultimately, the answers arrived at are typically not about the object or issue itself, but something far deeper and often more painful. Many of the disputes we see in divorce are actually just proxy wars for unpacking the emotional material of the marriage. But seeking and understanding those difficult answers can be clarifying, even freeing. I can vouch for that as a divorced parent myself and as a practitioner. And this is why therapists and divorce coaches can be essential resources for clients in either the mediation or litigation processes. Moreover, it is why it is vital for clients to seek and find emotionally perceptive, sensitive and nuanced attorneys who can appreciate what is often unspoken and unseen, but is driving the trajectory of a case or a position on an issue. In the end, I won that mixer for the client but I am not confident the person ever used it again.