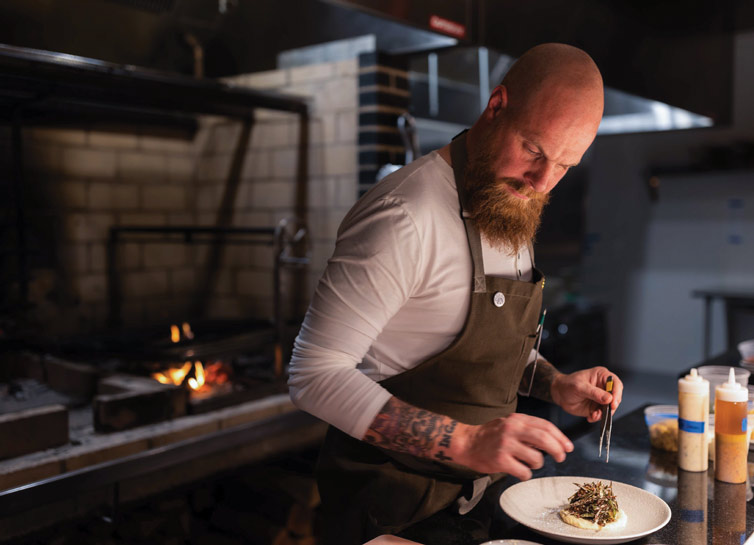 Chef Chris Curren in the kitchen

Would it be too presumptuous to crown, right here and now, Chef Chris Curren’s new St. Charles spot, The Graceful Ordinary, as the single charming post-shutdown restaurant debut of the year?

The food. The vibe. The jaw-dropping views. They’re all revelatory. Suffice to say, it’s worth the drive, no matter how high inflation takes a half tank of gas in the months to come. We were beguiled by the whole experience, in part because the last time we’d strolled downtown St. Charles there was a big old Brutalist eyesore of a concrete bank where the Graceful Ordinary now sits.

My, my, my … how things have blossomed. Makes one think of the parable of the intrepid flower that squirms its way up through a crack in the cement. The Graceful Ordinary doesn’t just rest on the banks of the Fox River, it feels like it’s perched there, almost hovering over it, the way Frank Lloyd Wright cantilevered Fallingwater over the rushing waters of the Bear Run Stream in Mill Run, Pennsylvania.

It’s field meets fauna in there. Historic-minded yet modern. Chic but unabashedly rustic. Chris Curren and his wife, Megan, both worked in the city prior to the pandemic. Chris oversaw the menu at Fulton Market Kitchen. Megan, who grew up in St. Charles, handled event planning. 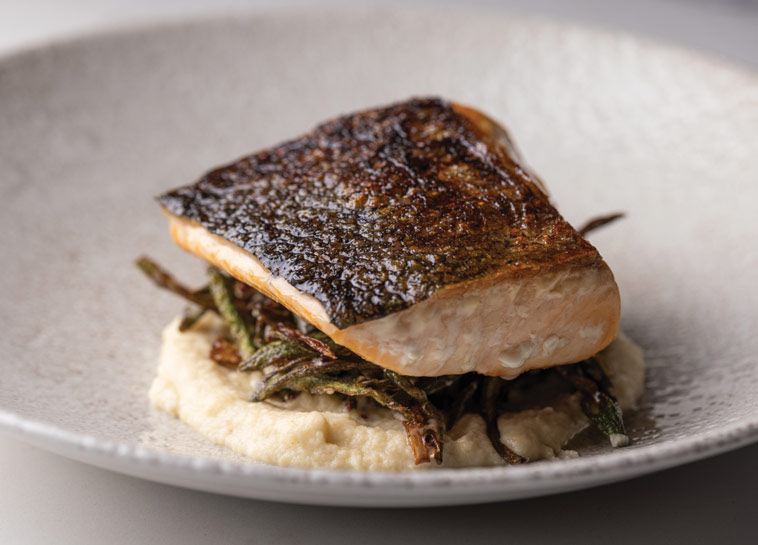 With their day jobs put on hold due to the shutdown, they began strolling the streets of St. Charles and imagining a novel dining concept, the likes of which no one had ever attempted in the Fox River Valley: a modern take on the fire-dappled Colonial-era taverns that once forested the East Coast during the 18th century.

Chris dreamt of working in a spacious open kitchen complete with an open hearth or the kind of first-class wood-burning oven you’d find in an elegant Neapolitan pizza parlor. Thankfully the Currens decided to purchase both of them. 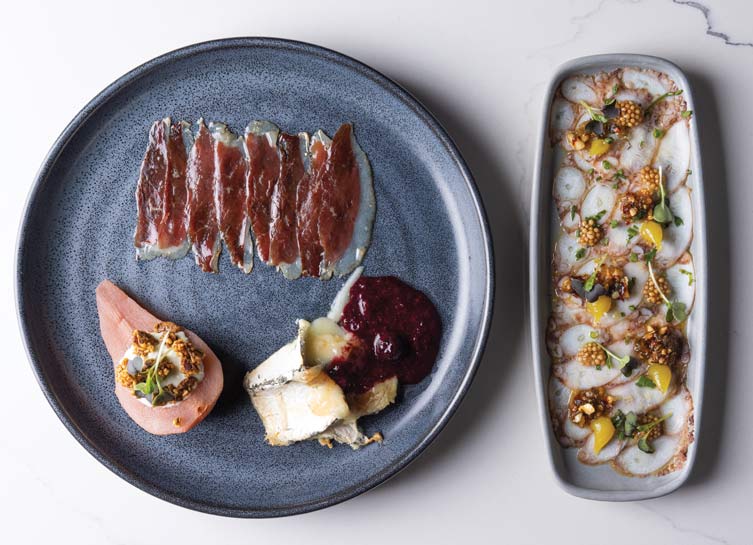 Order the kitchen’s stellar fire-roasted salmon and you’ll understand why both wood-fired stations were worth every penny.

It’s the juiciest salmon this side of Alaska’s Bristol Bay. To preserve the fish’s natural oils and unctuousness, Curren sears the filet on a plancha set over the open flames of his hearth, then finishes it the wood-fired oven to double-crisp the skin and seal in its juices. While he’s busy preparing the salmon, he’ll warm two bowls placed on a grate perched high above the flames: one is a thick-as-Sabayon celery root puree and the second a loose brown-butter sauce. The salmon is glided atop a bed of crispy okra creamed by the puree, before a final drizzle of the brown butter acts as the dish’s glistening amber-colored capstone.

There’s nothing dainty nor clichéd about any of the Graceful Ordinary’s offerings. This is muscular, rich and delightfully unpredictable fare. Take the dry-aged Bolognese, for instance. It doesn’t arrive looking like plump red tomato has been squeezed all over it. It’s ochre-colored, dark as a cinnamon stick.

The dish is composed of trimmings from the kitchen’s dryaged rib-eyes, which simmer in a tomato sauce spiked with a deep balsamic reduction that’s poured over flat handkerchief-shaped fazzoletti pasta squares. It’s unlike any Bolognese you’ve ever tasted, but it does answers the burning question: What would happen if a Pasta Granny decided to prepare an Old World Italian take on Texas chili?

Every single offering came bearing a delightful surprise. A verdant, colorful burrata appetizer was speckled with perfectly al dente fava beans and crowned with tangle of pea tendrils. Curren’s steak tartare is served atop a buttery tuft of brioche, as if the chopped beef were some sort of savory frosting. The aforementioned charred rib-eye is paired with a spicy red pepper chimichurri sauce thickened with almonds. And the decidedly non-pedestrian chicken platter is a twin bill of deliciousness: a brined chicken breast roasted over the fire and deboned dark meat that’s fried Southern-style with a side of collard greens. 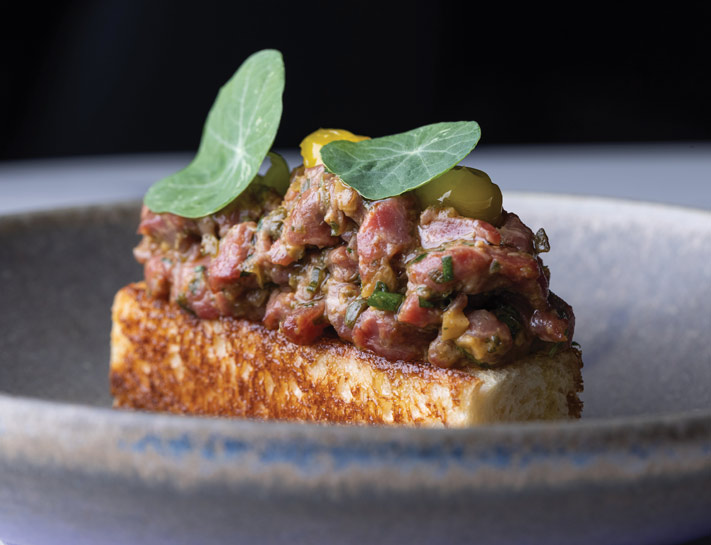 “oohing” and “ahhing” your way through the meal you’ll understand why the Currens chose the name they did, fusing the word “ordinary” (a common name for tavern during the American Revolution) with “graceful” (a nod to the style and care they’ve brought to their food and decor).

The restaurant itself, in terms of ambiance, is positively lush. Grab a seat pretty much anywhere in the main dining room and you’re going to enjoy unobstructed views of the rushing Fox River. Late in the afternoon, on a sunny summer day, it feels like a Hudson River Valley landscape painting come to life.

The dining room itself borrows more from Fragonard than Bierstadt: a modern take on an 18th-century Rococo drawing room. Lots of polished wood. Bold statement-piece wallpaper selections. A fireplace lounge up front, where diners can enjoy drinks and snacks. Plenty lots of patio space for al fresco dining.

Then there’s the central dining room, which is haloed with modern chandeliers that look like upturned clear Jell-O molds and fringed rows of faux greenery tucked into the rafters.

Curren says that he hopes guests will look around during their meal and struggle to distinguish—with the snap and crackle of the fire, the soundtrack of rushing water, and the chatter of people laughing and scraping their plates clean—as to where the outside ends and the restaurant begins. 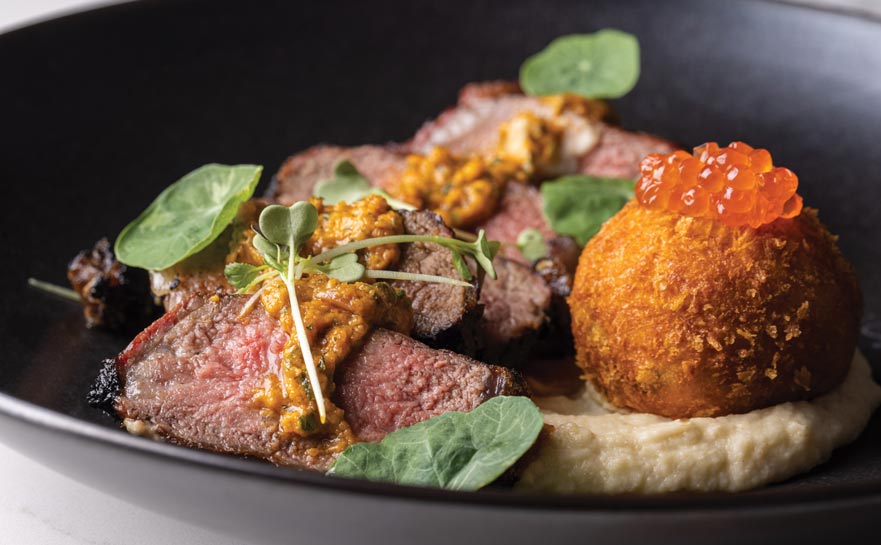 In the months to come, scores of diners are likely to tell him that he’s achieved just that. But one thing is absolutely certain: In one fell swoop, the Graceful Ordinary has made St. Charles one of the can’t-miss dining destination of this summer. 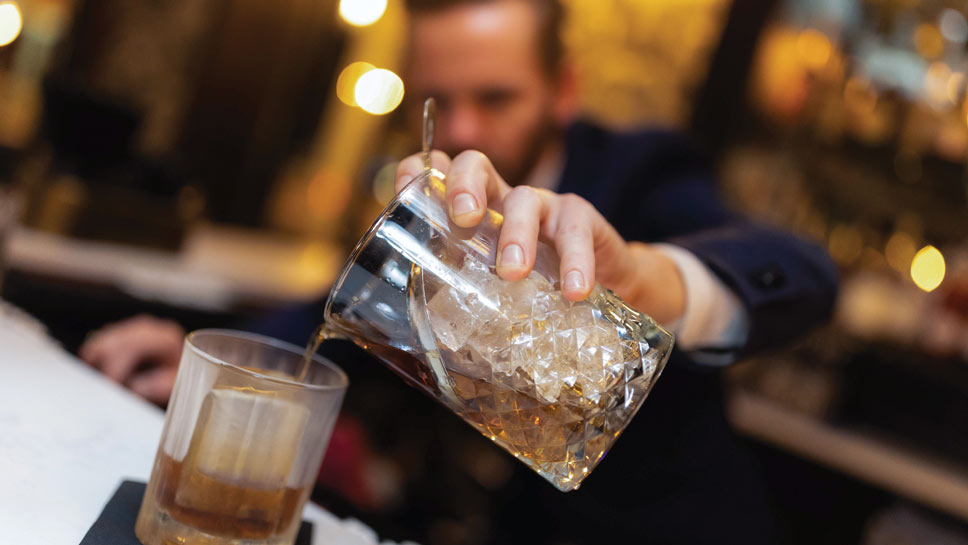 There are two separate cocktail menus at The Graceful Ordinary: a classic cocktail list with beloved favorites and a slightly bolder yet never overtly esoteric premium cocktail menu. For a sweet summer fling, try the Kentucky Peach.

Rum-lovers will enjoy the aptly named Hemingway’s Away, which blends assorted rums with a sunny backbone of lime, framboise and orgeat syrup, a drink perfectly engineered for pre- and post-dinner sipping on the patio.