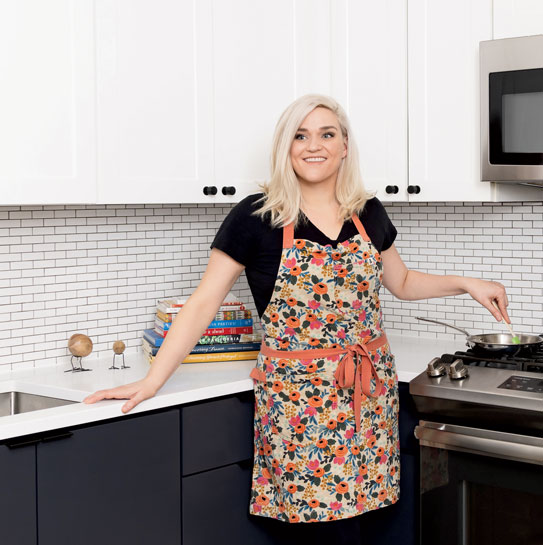 A cooking class at Hinsdale Middle School just might have set chef and Food Network star Grace Goudie on her current career path. “That class changed my life. The teacher really opened my eyes to what I wanted to do with my life.”

The classically trained chef is a graduate of the Culinary Institute of America in Napa, California and worked in restaurants in California – including the three Michelin-starred French Laundry, before opening Scratchboard Kitchen in Arlington Heights in April 2020.

Two months later, she launched her online brand, gracegoudie.com, in June of that year. Her video-based content, which focuses on cooking that is composed, not complicated, caught the eye of the Chopped casting team. The production reached out in June 2021.

“I wanted to be on Food Network. It was a goal of mine so I took the opportunity not knowing what to expect, but with the thought that my formal culinary training might really help set me apart from the home cooks who are cast in cooking competitions,” Goudie says.

“There was a chance that I could completely bomb, but I was okay with that,” she says.

As it turns out, this chef with her journalism background, is a total natural who won round after round of Chopped Casino Royale. She dazzled the judges with dishes including chirishi ceviche with green pepper tea and peach vodka sauce, and lamb schnitzel with spaetzle and fuzzy squash salad.

“I loved it and had an amazing time competing. It felt like taking the first opportunity in living out my dreams,” Goudie says. “I tried not to overthink any of it, choosing instead to just cook with heart and soul. I found out I’m good under pressure,” she adds.

She believes her time in the kitchen with legendary chef Thomas Keller helps in all her endeavors, whether creating the high-end farm-to-table take on brunch that has Chicago foodies flocking to Scratchboard Kitchen, creating the instructional cooking videos on her website, or turning a basket full of ingredients into delectable dishes. “My fine dining background serves me well,” Goudie says.

Other elements in her secret sauce to success are support from her family, including four siblings and parents Chuck Goudie of ABC-7 and mom Teri Goudie, who is also an award-winning journalist. Community support from chef Paul Vivrant has also been helpful. “He’s been a wonderful source of advice and there’s no better spot for good food and good hospitality than Vistro Prime,” Goudie says. Finally, her work ethic, established through shifts at Egg Harbor throughout high school and on college breaks, is unmatched.

For now, this chef invites everyone who enjoys a lively afternoon to visit Scratchboard Kitchen in Arlington Heights. “Have a glass of wine or a cocktail and eat a brunch that will leave you feeling great.”

With her eyes perpetually on the next goal, she’s not sure where the next restaurant will be, nor the next television appearance, but it’s all happening for this incredible woman.

Put these on your summer and fall itineraries:

If you have an afternoon, drive to the Sonoma coast for a pound of Hog Island Oysters, which you can cook on one of the grills and enjoy as the best rustic picnic ever. The Hog Shack, 20215 Shoreline Highway, Marshall, CA. 415.663.9218, hogislandoysters.com.