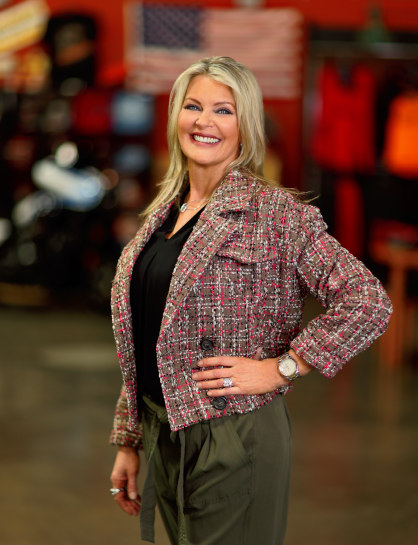 Hinsdale’s Jill Giglio positively lights up a room when she enters. Her bright eyes match the lovely smile that rarely leaves her face. After an initial warm greeting, one immediately wants to become fast friends with this woman. As the conversation unfolds, this feeling only grows, as Jill reveals bits of her unexpected, utterly glorious life as a military spouse, mother, philanthropist, and pioneering female motorcycle dealership owner.

Jill met her husband of more than 20 years at The Lantern in Naperville. Both were established professionals. She, as leader in marketing and sales. Anthony “Ozzie” Giglio, as an attorney, venture capitalist and Naval Reserve Commander in a special operations group dealing in counterintelligence and counter terrorism.

After that afternoon, each knew they’d found the person with whom they wanted to travel through life.

“We walked each other down the aisle,” which was so beautiful, says Jill, who adds, “We left the reception on a motorcycle with a parade of flag-bearing motorcycles following us. It was very much like An Officer and a Gentleman.”

That cavalcade foreshadowed the empire to come. Ozzie suggested buying their first Harley Davidson dealership in early 2001. When the whole world changed following the terrorist attacks of September 11, Ozzie was often deployed to Iraq or Afghanistan or working closely with Pentagon leadership. Jill was running the dealership. “There were really no other women owners at that time. Customers would ask to speak with the owner and wouldn’t believe me when replied that I was the owner,” she says. Jill explains that making sure the dealership was successful became her mission while Ozzie fulfilled his.

“Our whole philosophy is to provide great customer service with a smile and the spirit of kindness. If you do that, people can get used to the idea of a woman owning motorcycle dealerships,” Jill says.

Today Windy City Motor Company owns 15 dealerships, most of them purchased as underperforming and transformed with the philosophy of serving with kindness and smiles.

In 2013, Jill and Ozzie moved from Wheaton to Hinsdale. In true Giglio family tradition, they closed on their new home, walked in for the first time as owners, and 20 minutes later a car pulled up to take Ozzie for another deployment. Jill carried on beautifully. “I have the strength to go weeks without speaking to my husband, even though we missed each other terribly. He would sometimes go on another deployment so that someone else could go home.”

Always philanthropic, Jill and Ozzie dialed up their giving following two monumental medical events in 2016. Ozzie was diagnosed with stage four head and neck cancer and after a long, painful struggle, Jill was pregnant with twins.

“We stopped and evaluated what is really important to us,” says Jill. Thanks to an incredible team and with Jill by his side, Ozzie beat cancer. Jill delivered Jorie and Ronin. “We now live with a greater sense of purpose,” says Jill. The couple have donated $500,000 to the University of Chicago Head and Neck Cancer Center. They have made a similar donation to Columbia University in New York.

As a family of four, the Giglios met more people in town and the small town feeling that initially attracted them to Hinsdale grew. Jill is a member of a book club and Hinsdale Junior Woman’s Club (HJWC). She hosted HJWC at Illinois Harley Davidson to announce the theme of their 2022 benefit.

Jill loved shopping for the club’s “Gift of the Spirit” holiday event where families in need receive gifts that would otherwise be hard to come by. “I appreciate how HJWC supports mothers and children,” Jill says.

When asked how she will spend Mother’s Day, Jill smiles softly and describes a day that will start with coffee and planting spring flowers before moving on to brunch at Butterfield Country Club. She says that Ozzie will help the twins make cards and crafty gifts. It will be a perfect family day.

“It feels wonderful to be anchored to a small town,” Jill says.