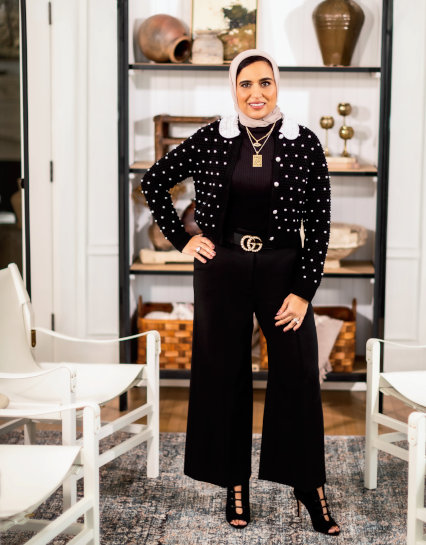 Sometimes you don’t know what you want until it’s right in front of you.

For Reem Hassaballa, an interior design-obsessed mother of four, that’s exactly how she and husband, Hesham, felt when they walked into an elegant, 1910 George Maher landmark in downtown Hinsdale three years ago.

The house hunt had her feeling a bit like Goldilocks. She had a wish list. She had a plan. But nothing was ever quite “just right.”

“We were planning on building near Fullersburg Woods off of York Road,” explains Reem, who chronicled the family’s story on her blog at reemsdesign.com. “But after going through the initial design process of the house, we decided to throw in the towel because we didn’t like the builder’s work.”

When the family first moved to Hinsdale in 2014—just five years after the tragic loss of their daughter, Bayan Hassaballa, to Ataxia-Telangiectasia and Lymphoma—they were in a new construction home located within walking distance of downtown.

While the new house they were planning to build would be much larger, she began to realize she’d miss being able to walk her children to school or grab a quick drink from Starbucks.

So, when the Hassaballas went back to the drawing board to restart their search for a dream home, location moved to the top of what was already a very long list—a list that seemed more impossible by the minute. They had their hearts set on new construction, but they also craved the exquisite architectural detail and finishes usually only found in older homes.

“She knew we were looking for spaces with grandeur in a great location and this home fit the bill,” says Reem, explaining that even though the house was over a century old, it had been meticulously renovated by an investor. “The home’s brand-new bathrooms, and clean, white kitchen really impressed us. And, since we knew we wanted space for a pool, the nearly one-acre lot was very appealing.”

The original plan was to do a walkthrough of the sprawling five-bedroom home and take notes that a builder could use to replicate a similar look and feel in a new construction. But by the time the tour ended, there was no turning back. They were beyond smitten—even Hesham, who famously told Reem before the showing he was only seeing the property to “humor her.”

It was not only perfect; it was “just right.”

“The moment we stepped into this home, both my husband and I agreed it reminded us of the flats in Paris or the homes on the Gold Coast in Chicago,” says Reem, adding that they almost thought it was “too good to be true” at first.

“Since traveling to Paris a few times, I have gained a greater appreciation for homes like this. Lots of Hollywood movies are shot in homes like ours and I have always wanted to spend part of my life in something more historical—a place that stands apart from the rest.”

That dream not only came true, but the Hassaballa’s story is now inspiring others.

In addition to Reem’s blog and regular photo montages on her Instagram page @reems_design, the family’s interior design journey was the subject of a 10-page HGTV Magazine article last September.

“The editor told me that it was one of the biggest spreads for a home ever,” she says. “They spent two days here, videotaping from 8 a.m. to 5 p.m. It was definitely a very exciting moment.”

Reem, who now also works as an interior stylist and was recently chosen as one of the featured designers for the Better Homes and Gardens One Room Challenge, says the home’s prestigious architectural pedigree and majestic finishes provided the ultimate canvas to build from.

“It is a Prairie-Style home designed by architect George Maher, who was a colleague of Frank Lloyd Wright. In fact, they both worked in the same office,” she explains. “The home is filled with natural light, which can be enjoyed by a grand sunroom that was added in the ‘90s. This natural light and the massive windows throughout the house are what really attracted us.”

The couple also fell in love with the fireplaces—seven in total.

“Two of the fireplaces on the first floor have the original mantel surround and they are vintage gems,” she says, adding that soon after moving into the home, she and Hesham realized what a solid investment it was, literally. “When we replaced all the windows in 2020, the contractor kept telling me that this house is just solid. It is a fortress.”

As Reem proceeded to infuse her own eclectic modern style into the home’s décor, she began to appreciate the vintage details that should never change, even the quiet hum of the old radiators.

“The character in this home would be so expensive to replicate. The molding, trim work, and doors are all solid wood. You can feel how heavy the doors are,” she says. “We have original hammered brass doorknobs and hinges, as well. All these things make this home so unique and one of a kind.”

One of her first projects in the “new” house was to give her children, Lianna, Zac, Minna, and Sereen, bedrooms tailored to their own interests and hobbies.

“My older daughters had a big say in how they wanted their rooms decorated,” she explains.

For 11-year-old Lianna, who dreams of living in Hawaii someday, a boho look was achieved with floral decals (from Urbanwalls) and a rattan headboard from HomeGoods. Sereen, the 15-year-old, loved her old room so much she wanted to recreate it, down to the hanging chair from Anthropologie (and the same type of decals used in Lianna’s room). Twenty-year-old Minna’s room got similar decals and 9-year-old Zac’s room was given a one-of-a-kind makeover with a black shiplap wall for an adventure theme.

“My kids truly love the home but are most impressed with our newly built pool. We have hosted birthday parties, yoga classes, team dinners, and baby showers out there,” she says, adding that her children also benefited from her recent One Room Challenge.

“I decided it was time to improve their video gaming/teen lounge, so I worked with over 10 brands to really make this into a dream teen area. Now they love hanging in their own space down in the basement.”

That’s right. In addition to sharing her passion for interior design with friends and family, Reem has inadvertently become something of a social media influencer.

“I always have found that decorating and styling come so naturally to me. I started my Instagram page in 2015 for fun to start posting about my home at that time. I did this just to document my design progress in my home and I soon found that people really liked and supported my page and my work,” says Reem, who now has 55,000 followers.

“What happened then was that my neighbors would come to my house and beg me to help them with theirs. I decided to take a few neighbors up on their requests, and so I went over and helped them.”

Soon, major brands began reaching out to Reem to enlist her help in promoting their items.

“They loved the way I styled their products and soon, I found myself in over my head,” says Reem, who has worked with such brands as Hudson Valley Lighting, McGee & Co., Pottery Barn, and Cozy Earth Bedding. “I receive a ton of requests daily and I wish I could say ‘yes’ to everything, but the brand needs to suit my aesthetic.”

One of her favorite things to do with interiors is to mix larger, more expensive pieces with lower-end accessories (or deals from places like HomeGoods). She is also sure to add a dash of vintage and personal items that make a space truly one of a kind.

“Vintage items add so much interest and tell a story. This is what makes a house a home,” she adds. “A California-casual sense of style is what I love most. Rattan, cane, and raw woods create a very lived-in look. It helps the home feel less sterile and uber-modern.”

While Reem does take on some interior design projects for friends and neighbors who reach out to her through her Instagram page, she’s trying to take it slow.

“I would love to grow this into a major interior design or interior styling firm in the future. But, right now I am focusing on growing my portfolio a bit more,” she explains. “I have received so much recognition through my page. I have even been interviewed for a TV show.”

The Hassaballa home was also the setting of a recent White Claw commercial.

At the end of the day, for Reem, the focus always comes back to family—not fame.

“I am so honored to have made a mark on one of Hinsdale’s gems,” she says. “And even if we don’t stay here forever, I can look back and say ‘I loved that home from my deepest core and I enhanced its beauty and character’.” 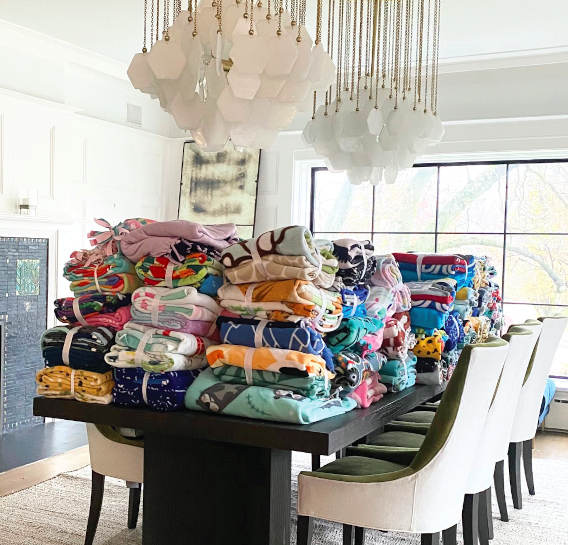 A nonprofit foundation founded in honor of the Hassaballa’s daughter, Bayan, provides warm blankets for children in the hospital and supports research to find cures for Ataxia-Telangiectasia and Lymphoma.

The center of Reem Hassaballa’s world has always been family.

So, when she and husband, Hesham, lost their 13-year-old daughter, Bayan, to a debilitating disease called Ataxia-Telangiectasia (which caused her to get Lymphoma), it was beyond devastating.

“She survived six months of chemotherapy until she lost her battle and passed in 2009,” explains Reem, who founded and serves as Executive Director of the Bayan Hassaballa Foundation, a nonprofit organization that aims to support the vital research into finding cures for Ataxia-Telangiectasia and Lymphoma. “Since coming to Hinsdale, I have started something called Blankets for Bayan, which has been a great success.”

With a mission to “Paint The World Pink For Bayan,” the Bayan Hassaballa Foundation provides warm blankets for children (and adults) at Lurie Children’s at Northwestern Medicine Central DuPage Hospital—where Bayan spent many days doing chemotherapy.

“This community has been overwhelmingly supportive, and we can’t thank them enough for it,” says Reem. “We have received grants from some local companies that have helped us make more blankets and that have helped us give back to some of the amazing charities that helped Bayan, like St. Jude’s and Make-A-Wish Foundation.”

Grants to the Make-A-Wish Foundation and St. Jude’s Children’s Hospital in honor of Bayan’s December 30 birthday (affectionally called “Bayan’s Birthday Gifts”) allow that organization to support other children the way it supported Bayan.

“I hope to continue Painting The World Pink for Bayan through our foundation,” she adds. “I know she would absolutely love the idea of the blankets and that warms my heart.”

For more information about the Bayan Hassaballa Foundation and how you can help, visit ourangelbayan.org.