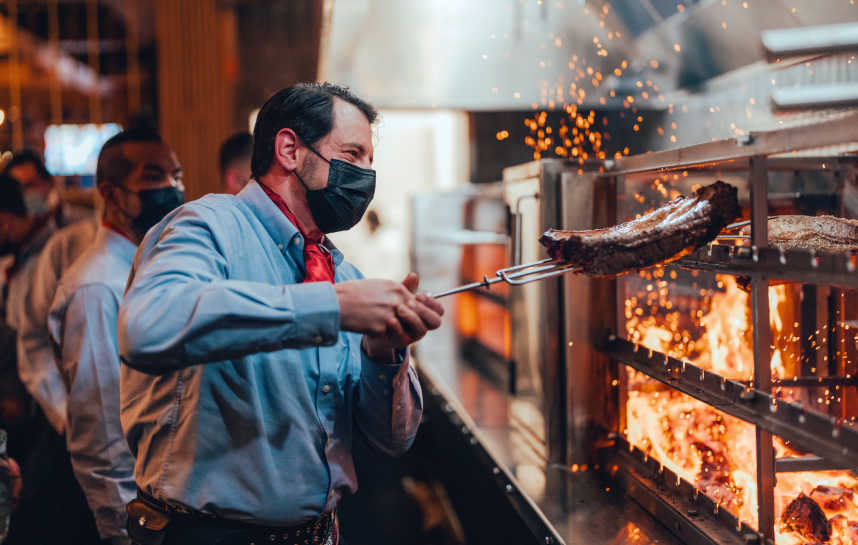 There may be a temptation to assume that if you’ve experienced the Bacchanalian thrill of gorging, like a Gilded Age robber baron, on an all-you-can-eat feast of skewered meats at one Brazilian churrascaria, you’ve pretty much experienced them all.

Maybe you’ve already done the math and come to the conclusion that consuming endless waves of bacon-wrapped filet mignon, pork ribs, and cheese bread runs slightly counter to that new gym membership you just secured. Or that the scientifically verified odds of stopping short and ordering only a single caipirinha cocktail—rather than two or three—is roughly 4,796,742-to-1.

To which we can say, we sympathize. We really do. (We’ve been right there with you, even though we have enough self-control to banish those unruly thoughts before they ever take root.) But honestly, if you’re still asking yourself those questions, it’s clear that you’ve yet to visit the new Fogo de Chão in Oak Brook, which introduces a slew of clever new twists on the traditional churrascaria experience.

Maybe you know the general process already? Most stateside churrascarias (the word churrasco means “barbecue” in Portuguese) adhere to a similar template. While diners graze on a sprawling cold buffet of meats, cheeses, and veggies, various cuts of beef, chicken, pork, and lamb are slowly roasted over an open fire.

Roaming bands of gauchos (a term synonymous with Brazil’s legendary horsemen and cowhands who were known to cook over an open fire) grab those glorious skewers and begin doling out slices to everyone in sight. 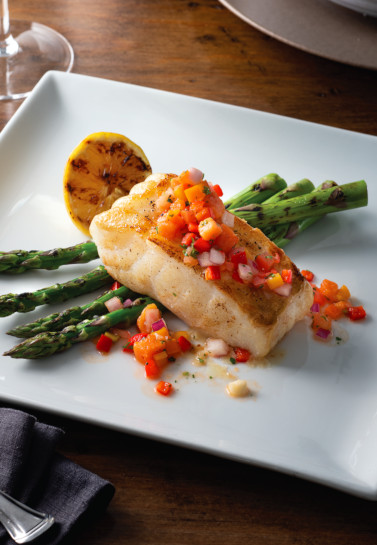 Diners who choose to partake in what Fogo calls its endless “Churrasco Experience” are each given a dual-sided disk. Flip that token to green and you’re ostensibly telling servers, “Come hither and slice me off a little bit of what you’ve got there.” Red, by contrast, indicates one of two things: A) I need a break because I have enough meat on my plate to feed a family of eight or B) I’m done eating because I’ve grown three pant sizes in the last 90 minutes.

We won’t deign to get into a debate—these things can get real heated—over what we consider to be Fogo’s best cuts, other than to say its beef options run gamut from bacon-wrapped filets and Flintstone-sized beef ribs to two personal favorites: a intensely flavorful bottom sirloin and Brazil’s iconic fat-fringed Picanha top sirloin cut. Just make sure to save room for the house’s chicken legs (marinated in beer and brandy) and its Parmesan crusted pork, which remind us of tiny delicious nuggets of pork Milanese. 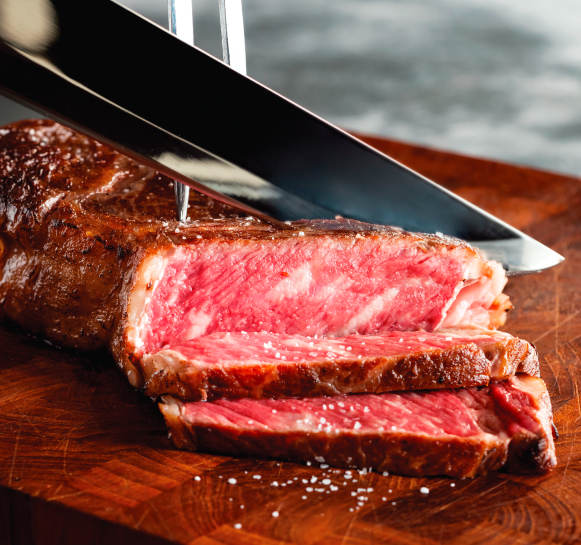 What’s most noteworthy for seasoned Fogo vets is Oak Brook’s jaw-dropping dining room. It looks like a jewel box. Floor-to-ceiling windows. The brilliant use of rope—note the chandelier—as central décor element. And a towering copper relief of a giant Brazilian cowboy as its centerpiece.

Nasco Angelov, Oak Brook’s general manager, says our local Fogo is the first of its kind in the world. Internally, it’s referred to as a Center of Excellence, which means it’ll be a testing ground for new ideas and dishes. You’ll see some of those new attractions already out in full force. Note the bar space, which serves burgers, small plates and happy-hour bites. But our favorite dining room feature is Fogo’s open kitchen.

We must have stood for 20 minutes watching Fogo’s gauchos spin around glistening giant skewers of meat as they crisped and sizzled over dancing charcoaled flames.

By the time you visit, you may also see giant dry-aged meat lockers bordering that kitchen. Those who wish to really splurge can order a 21-day aged tomahawk chop that will be removed from the locker, sliced up and presented to your table. If that’s not ritzy enough, Fogo now boasts the option to order a mouth-watering selection of uber-indulgent cuts. Think ancho-dusted Wagyu ribeyes or a hulking 20-ounce Wagyu New York strip.

We diverted from tradition by ordering an extremely mild Chilean sea bass as a stand-alone entree—pro tip, pair it with the house chimichurri or cold buffet’s basil dressing. We also saved just enough room for dessert to fall deeply and madly in love with the triple-chocolate brigadeiro, which made it into our top 10 most decadent desserts of the year list. Imagine a giant chocolate truffle, fringed with an Oreoesque crust, that’s then draped in chocolate ganache and topped with chocolate sprinkles. It’s a belt-buster, but like Fogo itself, worth every glorious calorie.

If you’re interested in great drinks or lighter meal, Oak Brook’s Fogo bar is both elegant and romantic. Or if you prefer some tableside pyrotechnics wait for the restaurant’s roving caipirinha cart to come by, so you can glean some mixology tips. 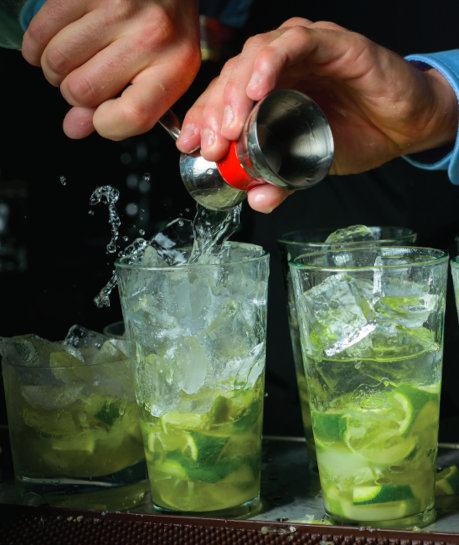 There are a half dozen caipirinhas on Fogo’s menu—from strawberry hibiscus to mango habanero, but our favorite is the premium version. Aged cachaça (a liquor made from fermented sugarcane juice), lime, and cane sugar. Fantastic. 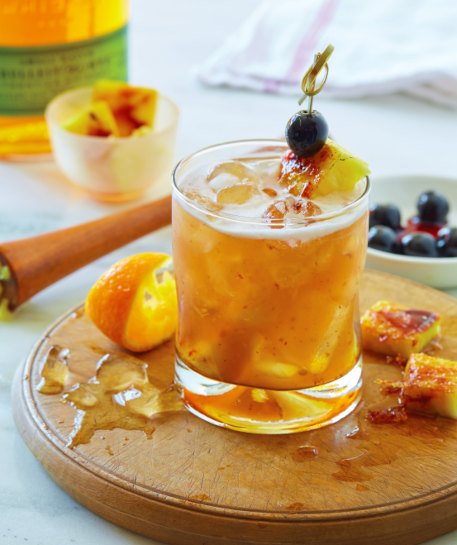 It’s not as treacly as it sounds. Muddled pineapple gets folded into a classic old fashioned made with WhistlePig PiggyBack 100 percent Rye. All that rye balances out the tropical overtones. Very coastal; very delicious.