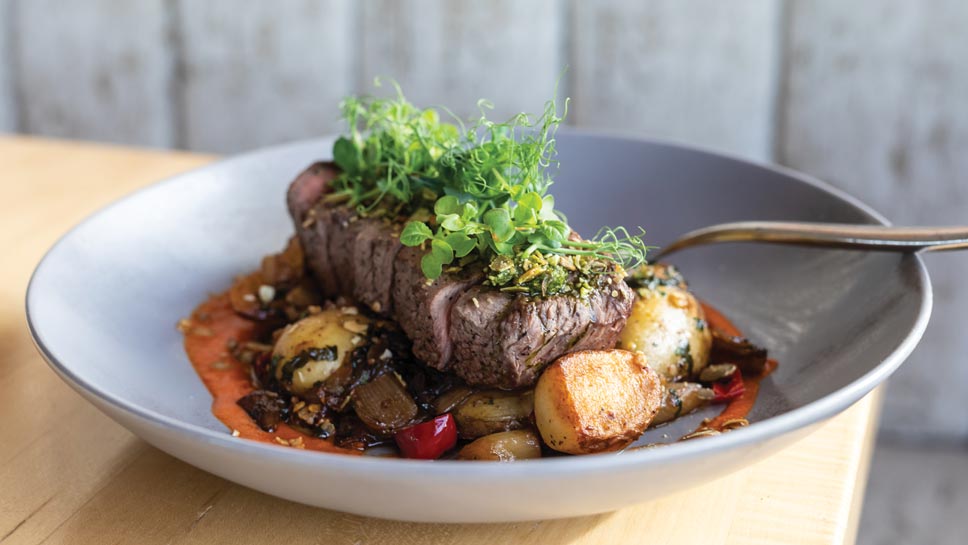 The Bien Trucha Group has a way with names. Very cheeky stuff, especially if you’re versed in family-friendly Spanish slang. Virtually all of their Latininspired concepts boast clever names with dual meanings. For example, there’s A Toda Madre (“Totally Awesome”) in Glen Ellyn. Bien Trucha (“On Top of Your Game”) in Geneva. And Quiubo (What’s ’sup) in Naperville. That’s a fun list.

There’s a strong argument to be made that no one will ever match, pun for glorious pun, the early monikers Lettuce Entertain You dreamt up in 1970s. The Great Gritsbe’s Flying Food Show? Lawrence of Oregano? They’re the stuff great press releases are made of, but I think Bien Trucha may be nipping at their heels. Especially now that I’ve experienced the lyrically named Santa Cielo, a chic small-plate restaurant on the 5th floor of the Hotel Indigo in downtown Naperville. 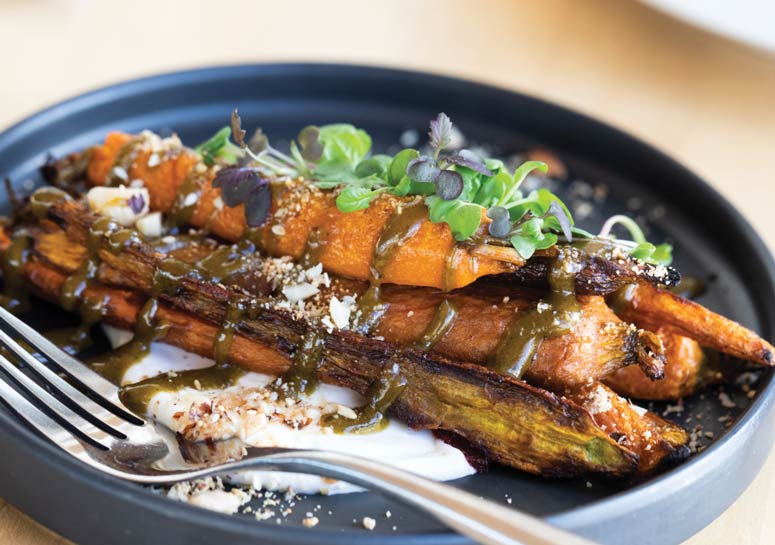 Say it with me: Santo Cielo. Sounds like something borrowed from a Gabriel García Márquez anthology, doesn’t it? Those twin soft “c’s”—my Spanglish patois simply doesn’t do them justice—are so richly evocative. Makes one think of all sorts of celestial glories. Cornflower blue skies. An endless horizon. Stars sprinkled across a dark sky.

Properly translated, says general manager Tim Sandow, the phrase means “Good Heavens.” Which is about as pitch perfect of a name, on so many levels, as you could possibly pick for this drop-dead gorgeous dining room in the sky.

Come to think of it, there is an air of magical realism to the space. Booths are separated by ladders Cocktails of rope—dangling from the ceiling like rigging from a Spanish galleon. Lots of cool gray earth tones. Big bulbous light fixtures. And more houseplants than the set of a 1970s sit-com.

Yes, the views are spectacular. Forget about trying to secure the normally coveted 7 p.m. reservation come wintertime. You want to be in your seats for the sunsets. Totally stunning. Not a bad seat in the house, either. Grab a corner table and the recessed lighting over the bar will absorb the dusky nectarine light and refract it—almost like neon arrows—back out into the horizon.

Fortunately, Culinary Director Abel Cortes’ dapper platings are sharp enough to compete with the views. Most of Bien Trucha’s concepts are rooted in traditional Mexican flavors. Not so much here. If anything, Santo Cielo seems inspired by every country under the sun. If there’s a through-line, it’s that Cortes has a soft spot for sneaking in spicy condiments and sauces as replacements for his usual Mexican peppers. 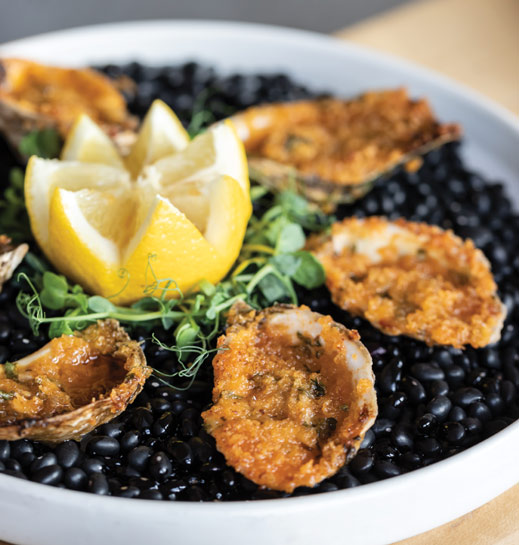 The best appetizers tend to be fired in the kitchen’s gas-fired Woodstone ovens. We enjoyed the house carrots, sprinkled with dukkah—a nutty Egypt dry rub—then set ablaze until they’re crusted over with a granola-like second skin. The accompanying garlic-laced Greek yogurt mixed with tahini acts as a worthy dip. If you’re willing to spring for a slightly pricier starter, try the fire-roasted oysters, which are given a modern Rockefeller treatment. Panko meets a roasted tomato broth, which tastes a lot like a tiny sips of a classy bouillabaisse served in scalloped shells.

Although the flat-iron steak won’t disappoint. Note the ring of crimson Calabrian chile: a romesco with an extra kick. But going seafood up and down the menu may be the way to go. There’s nothing authentically Hawaiian about its poke tostada, but a touch of spice on the back end keeps things interesting. Follow it up with the best-looking and best-tasting dish of our evening: a crunchy sliver of sea bass, slippery and sweet, set against a classic Mornay sauce. It’ll remind you why a chef who still knows his sauces will always have a job. 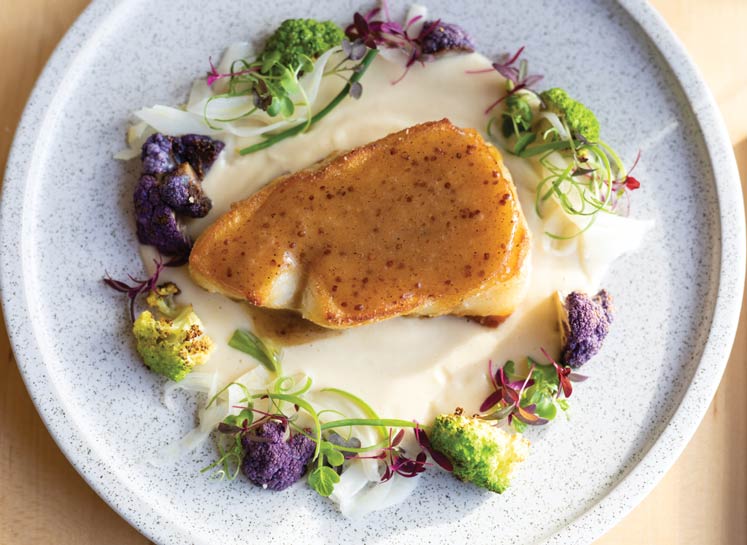 By the time you’ve polished off dinner and are ready for cheesecake, the stars will likely be out in force, giving you the opportunity to thank the heavens that this striking little gem is still shining so bright in downtown Naperville. 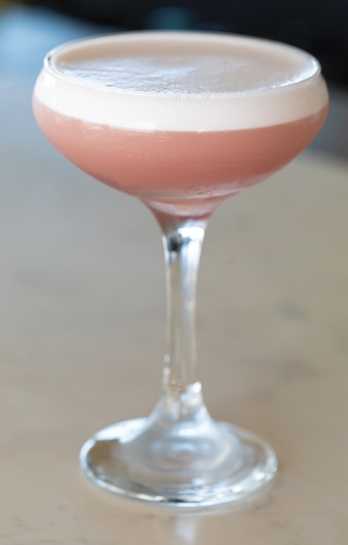 Sun & Strength: A dynamite pisco sour, frothy as a cappuccino, that’s brightened with semi-sweet shot of pomegranate and spritz of chartreuse. 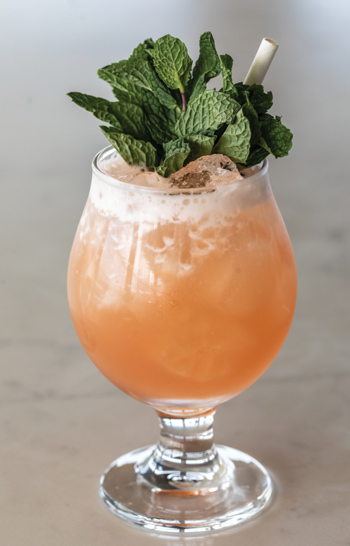