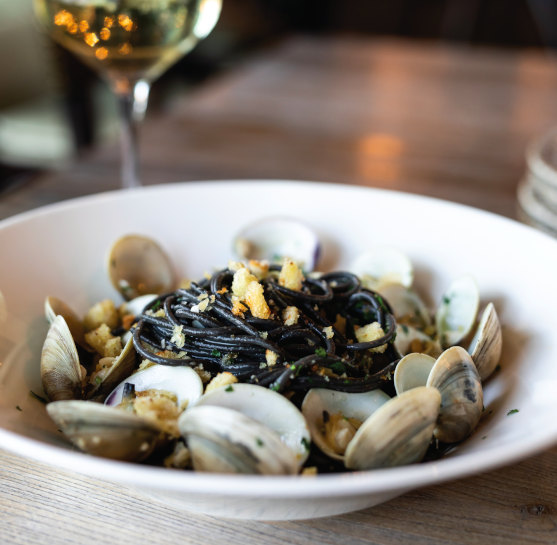 Chef Claudio Ulivieri is in his element. He’s bounding around his cozy new dining room, Lucca Osteria in Oak Brook, with palpable pride. He’s decked out in his snazzy new chef duds, a sleek grey-denim number that’s been tailored with a level of care rarely taken by any chef I know.

How tailored? Think Gregory Peck, suited up in pleated pants and a notched-lapel blazer, courting Audrey Hepburn in Roman Holiday. Ulivieri wants everything to be just right. He’s assessing diners’ reactions to their first bites of food. He’s grading his staff on their hustle. And he’s stealing time away from his kitchen to chat up early-bird Saturday-evening diners. 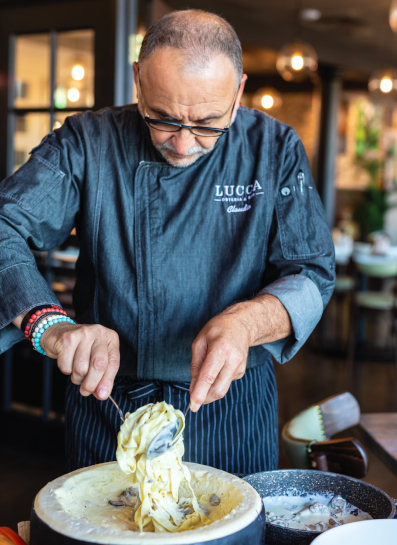 Too excited to let his servers have all the fun, Ulivieri preps the pasta himself. He flambés a shallow pool of 70-proof rum in the cheese’s hull, tosses in the fettuccine with sausage and mushrooms then proceeds to divvy it up—with shocking exactitude—into equal portions. 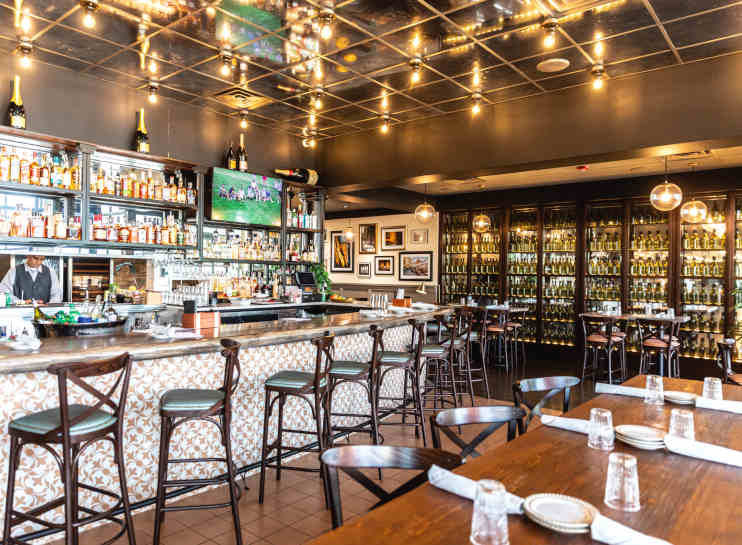 “You’re enjoying this aren’t you?” I ask. To which he smiles and says, “Every chef wants what I have right here.”

After 21 years as an executive chef/partner for Phil Stefani’s restaurant group and a short retirement due to COVID, Ulivieri has a place all his own in partnership with longtime restaurant vet Steven Hartenstein.

It feels like Claudio’s place, through and through. Note the restaurant’s moniker, named in honor of the Italian city of Lucca on the Serchio River in Tuscany. 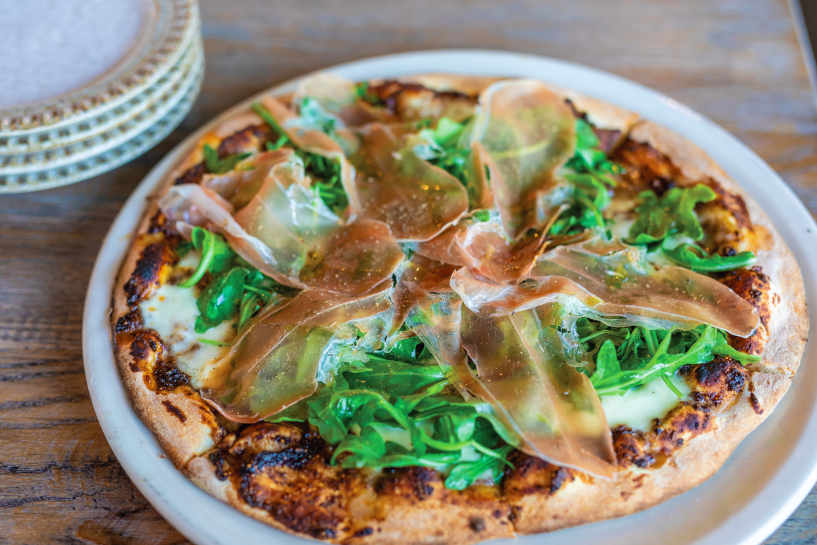 Prosciutto-arugula pizza made with fig jam and burrata cheese

Ulivieri sees Lucca as the most ideally situated slice of heaven imaginable. Visit the city, as Ulivieri does every year, and you’ll find the best culinary pleasures Italy has to offer. Ultra-fresh seafood. Enough Tuscan beef to fill a Costco. Fresh produce galore. And vineyards so old you’d need radiocarbon dating to affix an age to them.

The restaurant is located, appropriately enough, in a space that holds great meaning to Ulivieri: the old Tuscany dining room in Regency Towers, where Ulivieri oversaw the menu since 1993. After the Stefani Group closed Tuscany in 2018, Ulivieri and Hartenstein realized there was no better space to construct their dream restaurant. 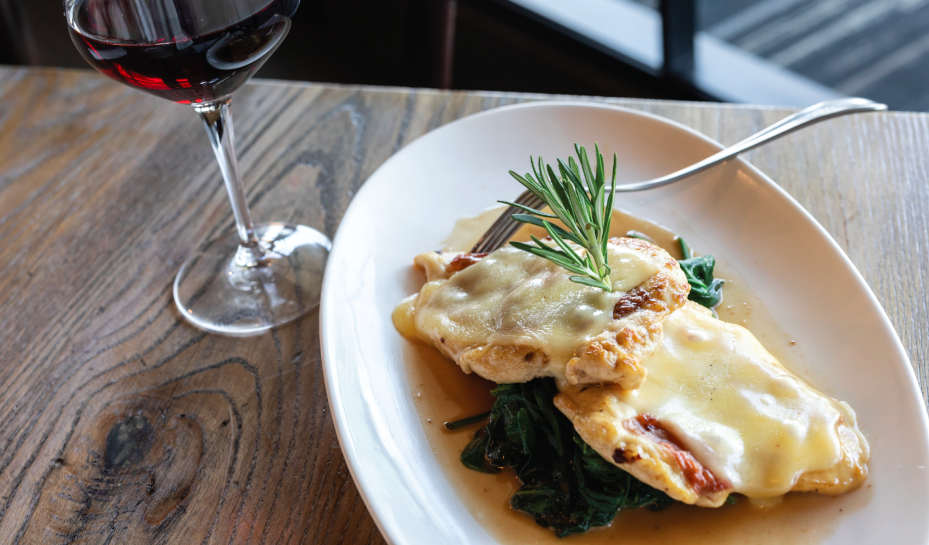 Although it’s not a strictly Tuscan menu, we leaned heavily into Ulivieri’s more carnivorous offerings—and were not disappointed. I’m sure, for example, that all of his pizzas—airy takes on Neapolitan-style pies made with his own choice of flour—are good, but there’s no use resisting his prosciutto-arugula pizza made with fig jam and burrata cheese.

I’m a sucker for dishes that channel the Italians’ love for pairing creamy cheeses with sweet condiments. Ulivieri’s pie reminded me of the breakfasts we used to eat in Rome—rustic breads smeared with ribbons of jam. Topped with prosciutto and tons of peppery arugula, it’s an amalgamation of antipasti classics on perfectly crisped wood-fired dough.

I’ve been told that Lucca may boast the best shellfish in all of Italy. The house’s squid-ink pasta—oil, garlic, littleneck clams, and crunchy bits of fried breadcrumbs—is a worthy surrogate, richly flavored yet light.

The same can be said for the kitchen’s entrees. I appreciated the sweetness of its Cornish game hen—rather than a regular old chicken—that’s crisped in a wood-fired oven, producing an impeccably juicy bird set in a simple wine-based pan sauce. And the kitchen’s classic take on veal scaloppini comes with an extra blast of forest-floor goodness, thanks to the inclusion of pioppini mushrooms as well as porcinis and oyster mushrooms.

It’s impossible to overstate just how much the restaurant’s management team—many handpicked by Ulivieri himself— elevated our dining experience. I was touched, for instance, to learn the backstories of key design elements.

The mirrors that greet guests in the dining room are repurposed from wood saved from Tuscany’s old wine lockers. Ulivieri didn’t have the heart to see them go.

Ditto for the painted doors that hang from some walls. Each piece is dedicated to someone—his late wife, father, cousin, Hartenstein’s children, and others—who’ve impacted his life.

Quite a statement when you consider just how much of an impact Ulivieri has had on those of us who’ve ventured to his Oak Brook kitchen and been treated to a heartfelt taste of Tuscany and beyond.

Lucca’s cocktails lean into Italy’s penchant for gilding drinks with bubbles, fruity notes, and the occasional savory blast of flavor. 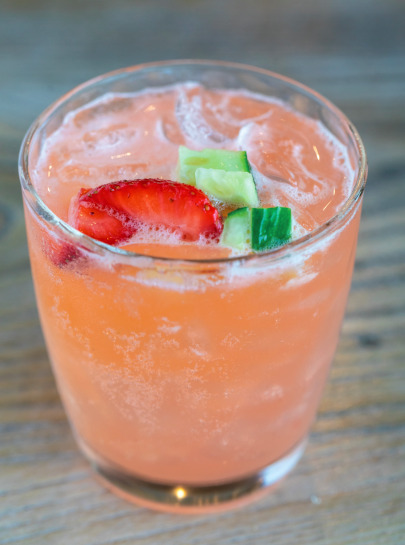 An incredibly light vodka-based offering that feels like it was built for a spa day. Think cucumber and strawberry plus a shot of St. Germaine. A shot of lime juice and tonic produce plenty of citrusy bubbles, so you can enjoy it sans food. 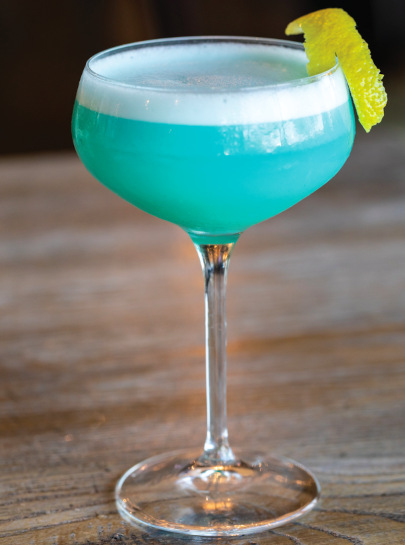 This is a dirty martini on Italian steroids: Wheatley vodka infused with olive oil plus shots of umami in the form of blue cheese, olive juice, and a touch of anchovy. Pairs perfectly with a sausage pizza or any beef dish.