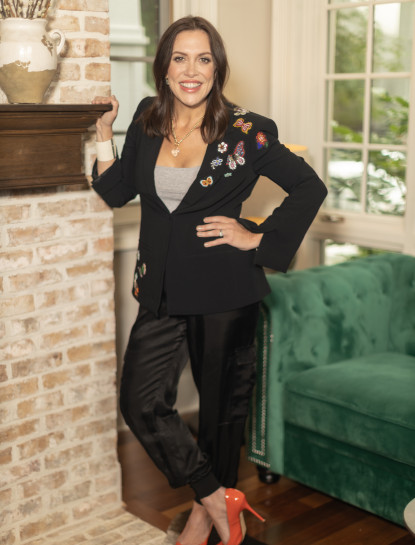 If sunshine had a name, it very well might be Whitney Reynolds. Because to know this popular Chicago talk show host is to feel a big ray of light.

Reynolds, the host of the nationally televised Whitney Reynolds Show on PBS, has always known that she wanted to be a broadcaster.

“One of my earliest childhood memories is having a friend of mine pretend to be a ’90s celebrity and me interviewing her,” says the Oklahoma native. “Even at a young age, people opened up to me. I loved listening to people, hearing them, and making them feel seen. I knew this was something I wanted to do with my life.”

But there is no roadmap to becoming a TV host, especially when you’re from a tiny little town in Oklahoma. But Reynolds dreamed big and believed in herself.

On one fateful trip to New York City when she was in the 10th grade, Reynolds planned to visit each of the morning news programs on the three days she was in town. She made signs with the hopes of drawing the attention of the camera crew.

As luck would have it, after a late night of some serious sign-making in their hotel lobby, Reynolds was holding one of them in a ride up the elevator. True to even her young self, she struck up a conversation with a man sharing the elevator with them who she later learned was a producer for Good Morning America (GMA).

“In those days, GMA had a studio audience and he told me he would get me inside so I didn’t have to stand out in the cold,” Reynolds remembers. “It was a dream come true.”

The next morning when it was time to head to GMA, Reynolds’ chaperone gave her $20 for a cab and sent her on her way. When she reached the studio door, an intern denied her entrance because her name wasn’t on the list.

“Fortunately, I made eye contact with the guy from the elevator who brought me in,” she says. “And he made the intern apologize for turning me away. That was a good thing because that intern helped me tremendously figure out how I was going to make talk show I dreamed of happen.”

The intern, whose name was Jordan, was a student at Baylor University when Reynolds met him. He was in Baylor’s broadcast program, which was ultimately where Reynolds found herself.

“I graduated from Baylor in three years and when it came time for me to have an internship, Jordan walked my resume right to the intern supervisor. Interning at GMA was one of the best training grounds any broadcaster could hope for.”

After honing her skills, Reynolds was hired as a morning anchor at stations in Oklahoma and Texas. But it wasn’t long before she took a risk and landed in Chicago.

“How I ended up in Chicago isn’t a great story, but it was the valley that prepared me for the mountain I was about to walk,” she says. “When the job I moved here for didn’t happen, I was selling shoes at Oakbrook Center for a little bit. I was then hired for another anchor job, but I had them put in my contract that if my online talk show got picked up—let’s be real, it was Facebook Live video—that I would have an out. And it was good that I did because Facebook morphed into YouTube that turned into Weekends with Whitney, which my show that was eventually bought by NBC.”

When NBC gave her show a yes, Reynolds had to figure out what it meant to “own” a program. But never one to be deterred, she did and partnered with advertisers that have never left her side.

“Two years into Weekends with Whitney where I was all over Chicago trying new restaurants, tasting wine, and jumping out of airplanes—I came back to the idea that led me into broadcasting to begin with—I wanted to change the world of talk TV where it was mission-centric and we told hopeful stories.”

This passion of Reynolds stemmed from some troubling circumstances in her own upbringing where she needed to feel that someone heard and understood her story.

“I wanted to create a safe space where people could tell their stories and feel comfortable and confident owning them, and the success of my program tells me that we’ve done this,” she says. Last March, in the midst of COVID-19, Reynolds got the call that her program was going national.

Reynolds’ mission, however, didn’t stop with her TV program. Since 2013, Reynolds has hosted a motivational “give back” segment on iHeart Radio and in 2021 launched a national iHeart Podcast, Pop and Positivity. Over the years, Reynolds has help fundraise more than $2 million for local and global charities through her media work, including a number of organizations in the Western Suburbs and Chicago’s North Shore. Her podcast recently featured the Together at Peace walk in Hinsdale.

“Things always seem to happen with just the right timing,” says the married mother of five-year-old twins. “I want to be as hands-on with my children as I can be, and my program was picked up just as our kids were going to be in school full time. I’m very spiritual in my private life, and I definitely believe God had a hand in all of this.”

The second season of the Whitney Reynolds Show is scheduled to kick off October 4. “I really believe that this season is our best work yet,” she says.