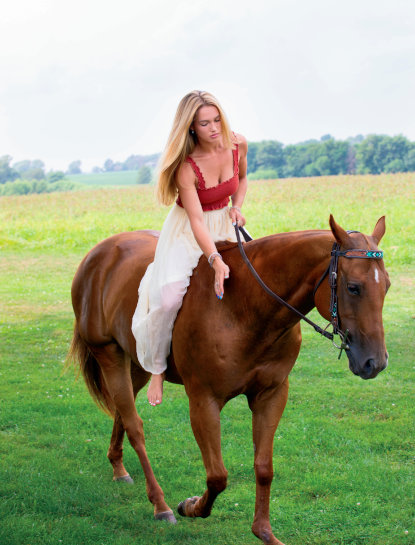 Dolores Onetto has grown up in the world of professional polo. Her Argentinian grandfather Horacio Onetto bred horses in his native country and then sold them globally to other polo players or rode them in matches himself. He was a 6-goal professional who played at nearby Oak Brook Polo Club throughout the 1980s. His son Horacio Jr.—Dolores’s father, a 6-goal professional himself—followed suit.

Early in Horacio Jr.’s marriage to his wife Hollis, they decided family they would travel the polo season circuit together as a family. With a farm as their home base in Aiken, South Carolina, today—Horacio Jr. competes in Palm Beach, Florida in the winter, Oak Brook in the summer, and Aiken in the fall.

The life of a professional polo-playing family is the only one 19-year-old Dolores, and her 16-year-old sister Inez, have ever known. 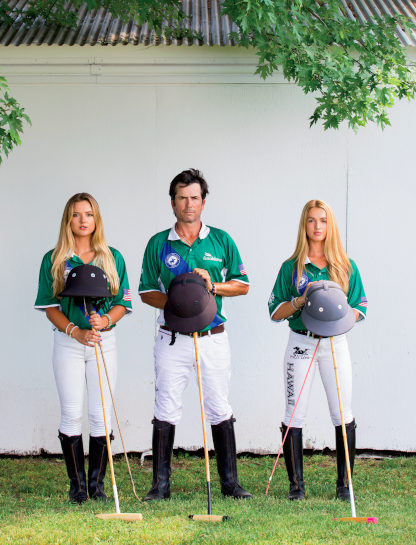 “It’s been an exciting way to grow up, even though it’s pretty different from other kids my age,” says Dolores, a rising college sophomore, whose schooling has been done almost entirely online. “But it’s easy to make friends with other families who are part of the polo world the way we are.”

Most people assume that Dolores started playing polo as a child because of who her family is.

“Polo is very different in the United States. Players begin their careers at a much younger age and polo is faster and quicker in Argentina because of this. I was born in Florida and when I was little, I started down a gymnastics path,” Dolores says, whose fit frame is evidence of the years she spent training in one of South Carolina’s top-ranked gymnastics gyms. “Our coaches were really strict with how much time we spent with the horses—so we couldn’t ride as much as I wanted to.”

But two years ago, realizing how hard gymnastics was on her body, Dolores decided to retire and channel her competitive energy into polo.

“I wanted to keep myself active,” she says. “I have always loved horses. I love caring for them and there’s such an adrenaline rush to be on a horse. You just fall more in love with them every time you ride.”

Even though she in the beginning of her career as a polo player, Dolores is already making quite a name for herself as a competitor. In addition to competing at the U.S. Open Women’s Polo Championship® in Hawaii this spring, her father asked her to join his team.

“It was really an honor when my father invited me to be part of his team,” she explains. “He has been playing all of his life and for him to ask me when I’m so new in my career as a player—it really meant so much.”

Dolores has been incredibly busy since arriving in Chicago in June for the summer season. Living and working on a horse farm in Oswego, Illinois—she’s competed in polo matches when the weather complies on the weekends in Oak Brook.

“My days usually begin with my sister and I taking the horses out, riding them, and then feeding and brushing them,” she says of the nearly 40 horses they care for. “If there is time left in the day, I train or participate in a match. It’s nice to be in season and get to play as much as I do—and to be able to play with my family is everything.”

The Onettos are not unique in making polo a family affair—the Obregon and Guitierrez families are regulars on polo fields all over the world, including Oak Brook.

Local fans are thrilled that Oak Brook Polo is alive and well again in 2021. Founded in 1922 by legendary businessman, Paul Butler, the Oak Brook Polo Club is an American Polo treasure and one of the oldest polo clubs in the United States. It was once the sport’s epicenter for elite professional polo in the United States and served as home to the U.S. Open Polo Championship nearly two decades and other prestigious international and national polo tournaments.

For decades, Oak Brook Polo Club has been a popular Sunday tradition and social scene known for entertaining Hollywood celebrities, dignitaries, royalty, and Chicago’s distinguished. Today, the Oak Brook Polo Club plays on the Prince of Wales Field, which is adjacent to the Butler National Golf Course and The Drake Hotel in beautiful Oak Brook. The club hosts a number of Sunday polo matches and continues to attract thousands of fascinated spectators who marvel at the athleticism and majesty of this timeless sport.

Although her summer schedule leaves little time to relax, Dolores doesn’t seem to mind. “I can’t imagine doing anything else,” she says. “I look forward to seeing where this all goes.”

For the latest information on Oak Brook Polo, visit oakbrookpoloclub.com.