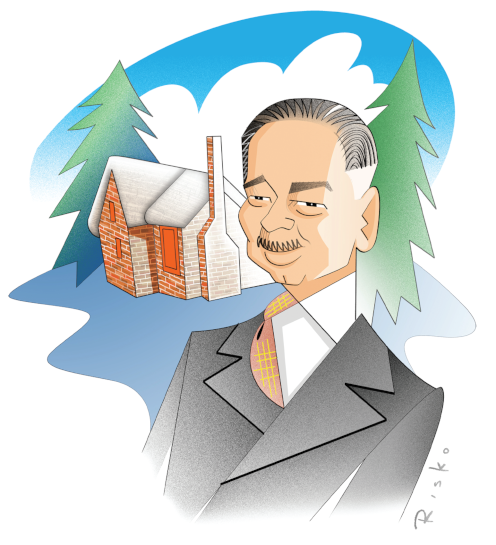 There is an old saying that “you can’t go home again,” that the people and places we leave behind are best left imprinted in our memories. But sometimes, however strange it may sound, home comes back to find you—in my case, exactly 72 years after I left this Earth.

My name is Roscoe Harold Zook and I have to confess, I’m just as baffled as you are. It could be that my name was in the news again late last year (as they sold off bits and pieces of a 1929 Hinsdale house  designed in a “demolition sale”) or that the folks at the Hinsdale Historical Society have been summoning my spirit through the tireless work they’ve been doing since 2004 to rescue (and relocate) my beloved home and studio. Or maybe it’s just the unprecedented (at least in this century) shift in our mindset as a result of the most recent pandemic—the pivot back to home, to finding a permanent place to call our own in a world that’s constantly changing.

That’s certainly what I found here in Hinsdale in 1924 when I built a small house for my young family at 327 S. Oak Street—a brick, Cotswold-style cottage with a cedar shingle version of a “thatched roof.” It was my own vision of a fairy tale and to my delight, the timing could not be more perfect. The war was over, my generation’s great pandemic (we called it Spanish Flu) had passed, and life was finally copacetic.

And boy, were they nifty times for architecture. After graduating from Armour Institute of Technology (now part of IIT), I got to apprentice with the great Howard Van Doren Shaw, where I met William F. McCaughey—my future business partner. We opened an office in the Marquette Building in downtown Chicago (it’s still there, I’m told, with a spiffy restaurant downstairs) and did a little bit of everything. Commercial buildings; homes throughout the Midwest. Even designed a movie theater right before the stock market crash (The Pickwick, which is still operating in Park Ridge). It got tough right after that with the Great Depression, but we kept going.

And yet through it all, my heart was where my home was, and the villagers that welcomed my, well, some would say “quirky,” style. Those who keep count can tell you my name was attached to 31 houses and six commercial buildings in Hinsdale. In addition to the rooflines and shutters and arches and architectural details borrowed from English Tudor houses and Cotswold cottages, I added my own signature touch—an homage to the mighty spider, nature’s finest builder. It tickles me that these spiderweb designs have become a hallmark of what people are now calling a “Zook home,” and to see that the village has aged relatively well in my absence. Some of the houses are newer and yes, we’ve lost some landmark beauties through the decades, but Hinsdale is just as captivating today as it was when me and fellow architects William G. Barfield, Edwin H. Clark, and Eben Ezra (E.E.) Roberts were manifesting our visions for this West Suburban village nearly a century ago.

So, while traveling back through time with imagined musings may be nothing more than a writer’s folly (on a certain magazine’s anniversary), the work that the Hinsdale Historical Society does to bridge the past, present, and future is not. My story (told through the ongoing efforts to preserve my home and studio) is just one of many from our 148 years of history that’s out there, waiting to be discovered.

Now back to that old adage. Can you ever truly “go home again?” In Hinsdale, maybe you can.

To learn more about the Hinsdale Historical Society’s efforts to preserve the R. Harold Zook home and other historic properties, visit hinsdalehistory.org.