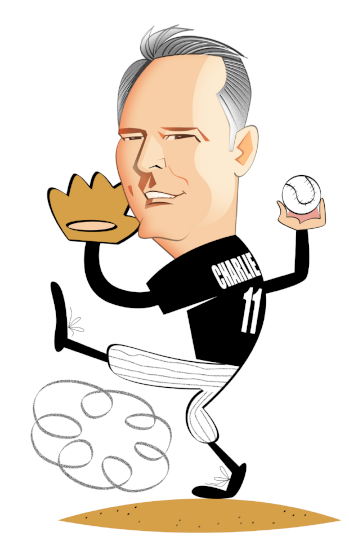 Charles “Charlie” Walsh Jr.’s favorite youth baseball story is the one about the short, thin outfielder who always stood way, way back on defense because the boy from Elmhurst was afraid of getting smacked by a screaming baseball. That same player struck out often.
Then, one day, every ball that had ever fallen in front of him in left field and every whiff at the plate became a distant memory after the struggling athlete ripped a pitch, scooted to first base, hustled to second base, arrived—standing—at third base, and flashed a smile wider than a warning track.

“Athletically, I was horrible,” admits the Oak Brook resident and one of 67 Chicago White Sox/Chicago Bulls co-partners. “But I had my Hall of Fame moment, one I’ll never forget. My father (former White Sox/Bulls co-partner Charles Walsh Sr., who died in 2018) saw my triple; he also couldn’t believe it.”

What Charles Jr. believes in today: that the White Sox will enjoy a home-run season in 2021. A playoff team last fall, Chicago’s South Siders—still blessed with a bevy of youthful talent—added three-time World Series champion manager (Tony La Russa, 76, in his second stint with the White Sox) and 2019 World Series champion outfielder and 32-year-old Adam Easton (also set to begin his second tour with the ball club), among other highly successful veterans, in the offseason. Chicago opens the season against the Los Angeles Angels April 1.

“I’m excited and looking forward to seeing what the new high-profile players will do with a strong nucleus that developed quickly last year,” says Walsh, owner of the commercial real estate company Walsh Partners, based in Elmhurst. “My father would have been super excited to know Tony had been hired to manage the team again. He was my father’s favorite White Sox manager, and he considered Tony classy and a true professional.” It can all feel like community, and that’s how Howard likes it.

“It’s about the dancers and the community, and just utilizing the art form to make the world a bit of a better place,” Howard says. Parents tell us that they want their kids to be better people. That’s what we seek out to do.”

YOUR FATHER ALSO WAS YOUR BUSINESS PARTNER FOR MORE THAN 30 YEARS. THE TWO OF YOU MUST HAVE BEEN QUITE A TEAM.
He was my best friend and my confidant.

YOU BEFRIENDED ADAM EATON WHEN HE PLAYED FOR THE WHITE SOX FROM 2014- 2016. YOUR THOUGHTS ON HIS RETURN TO CHICAGO?
I’m thrilled we’ll have his speed again; it’s phenomenal. Such an exciting player to watch. And he’s a great guy. He’s super passionate about cars, as I am. I see cars as rolling art.

YOU’VE ATTENDED ANNUAL INVESTOR WORKOUTS AT GUARANTEED RATE FIELD, WHERE TEAM PARTNERS TAKE BATTING PRACTICE, RUN THE BASES, AND SHAG FLY BALLS. TAKEAWAYS?
Professional baseball players have to be really talented guys. To stand at the plate and attempt to make contact, against the pitches I saw … incredibly difficult. I once spoke with (former White Sox great) Paul Konerko in Arizona and told him how much I appreciate, and truly respect, all that it must take to perform well in baseball.

YOUR FONDEST MEMORY OF THE WHITE SOX’S WORLD SERIES CHAMPIONSHIP SEASON IN 2005?
My wife (Violetta; she and Charlie have a teenage daughter, Gabrielle) grew up a basketball fan, north of Detroit. She then became a Chicago Bulls fan in the 1990s, as they won those six NBA championships. So it was heartwarming for me, a couple of days after the White Sox won the title in 2005, to hear her say, ‘Let’s do that again.’