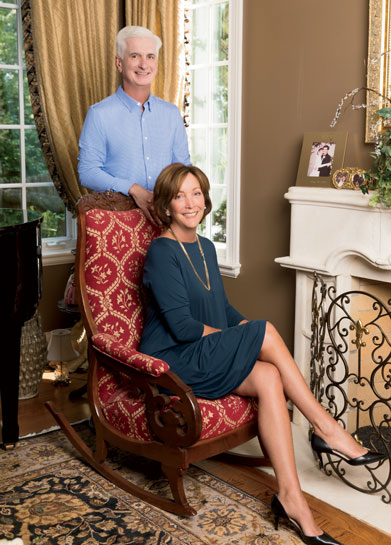 Megan Dragich remembers it like it was yesterday. The year was 1978. She was 19 and living in the all-girls dormitory at University of Illinois. One day a group of fraternity brothers came through collecting money for their philanthropy, including Steve—the man who would become her husband six years later.

“He knocked on my door and it sounds ridiculous, but I had two quarters in my pocket to do my laundry and I gave him my last two quarters,” says Dragich, adding that they immediately felt as if they recognized each other from somewhere. “U of I was a big school, but we never figured it out.”

What they did figure out was that they were in the same tennis class—the random elective that Megan had tried to drop but couldn’t. Fate apparently had other plans. By the second class, he asked her out and a romance quickly blossomed.

Two years later, when Megan was in her fall semester of her senior year, she began to not feel well. “Going down to school, I started having all the classic symptoms … frequent urination … I was down to 95 pounds and I wasn’t quite aware that all these symptoms were diabetes,” she says, explaining that with a history of the disease among family members, it was always on her radar, but not something she thought she’d be facing at this point in her life.

But all it took was an appointment at Carle Clinic in Champaign and some blood work for the diagnosis that would change her life forever.

“They said ‘you have diabetes and we want you to go downstairs and meet with the nurse practitioner and dietician and start taking your shots’,” she remembers. “I was like ‘wait, wait a minute … how about I come back in the afternoon?’”

As anyone who understands the urgency of T1D can attest, treatment should start as soon as possible, so that’s what Megan did. She also made a call to her boyfriend, Steve.

“I said ‘my worst fear has come true’,” she recalls.

“I would have been just six months older, so I was 22,” says Steve, a partner at Schiff Hardin who currently serves as JDRF Illinois Board President. “I was in my first year of law school. We were very young and very much in love, probably a little bit naïve, which is always a good thing. But we made a pact that we were going to take life as it comes, that this was our new normal, and we just have to push forward.”

That’s exactly what they did, sticking together through the early treatments—as Megan began taking shots that were dramatically different from modern treatments available now. The couple got married in 1984, had two children, and today stand as a testament to what is possible with love, faith, and hope.

“He’s been my best support since; he’s been there since day one,” says Megan, now an avid equestrian, role model, and constant advocate for those who are newly diagnosed and facing the same challenges she did nearly 40 years ago. “I never worried about Steve’s support. We were solid. My biggest concern was telling my parents.”

Megan’s dad was one of 12 and had two siblings who had battled the disease in a time when treatments were more challenging, and outcomes were not as positive. Instead of going home, she invited her father to visit her on campus, broke the news, and let him know that she would be OK.

“When we think back, she just dug in and took it upon herself to manage her disease and not let it define her,” says Steve. “It’s a very individualized disease because only you can help yourself. Back then, this was called Juvenile Diabetes because most people who were diagnosed were quite young. Over time that’s changed. I think it was just last year, of all the newly diagnosed, 50 percent were adults and 50 percent were children. It’s no longer a child’s illness.”

As such, he explains, what was formerly known as the Juvenile Diabetes Research Foundation changed its name to JDRF. “This better reflects our commitment to work for all of those with T1D,” Steve adds. 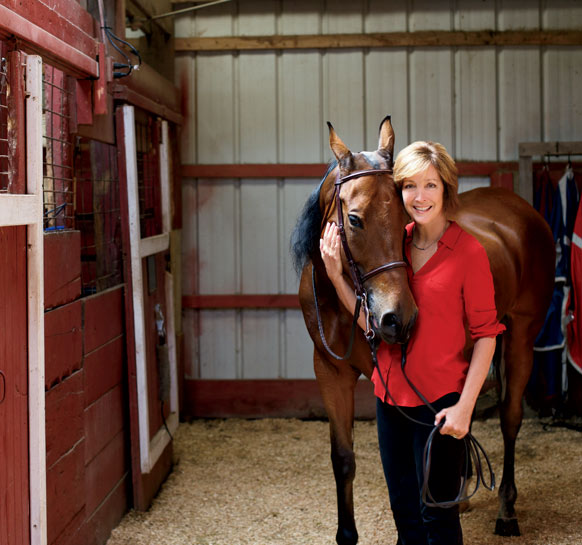 While Megan and Steve are actively involved in the nonprofit’s mission—serving as its Fund A Cure family in 2015—most of their married life was spent raising their two children, Lauren and David, in Western Springs and taking one day at a time.

“When the children were too young to really understand the medical side of the disease, I was always fearful that I would have low blood sugar in front of them. I tried to explain to them what would happen, and taught them how to call 911,” says Megan. “When David was in first grade, I got on the insulin pump and I didn’t want them to be fearful because fear breeds worry. Now I wear a sensor for my blood glucose but back then I would show them how I would stick my finger. I would do that in front of them all the time, and every once in a while, I would test them.”

She made sure to empower them with knowledge, replacing fear with information. Today, as Lauren is married and living in Chicago with a 19-month-old, and David who is also newly married, Megan continues to stay vigilant in making sure they stay aware of their risks they may have inherited. Meanwhile, she serves as an example to others in the new role she and Steve have taken on with JDRF.

“We’re doing everything we can,” she says, explaining that one of Steve’s colleagues got them involved by inviting them to a gala about 10 years ago. “When we were first engaged with the fundraising aspect of it, it’s not something we’re super comfortable with—putting ourselves out there, reaching out to everyone we know to raise money. But JDRF is fantastic at what it does and we’re proud to do it.”

Or as Steve put it in his speech to 2,000 gala attendees at McCormick Place when they were the Fund A Cure family five years ago: “It’s Megan’s disease, but it’s our story. Our family has a long past with type 1 diabetes and now we’re helping to write our future. We are proof that it is never too late to get involved with JDRF. There is a place for everyone here tonight. Parents, children, husbands, colleagues, siblings, cousins, friends, neighbors—this disease affects all of us.”

In addition to their ongoing advocacy work and Steve’s service on the board, the couple is thrilled to be involved in this year’s gala, held virtually on December 12.

“When we first started going, it was such a fun night. Not your typical fundraiser,” Megan says. “It drew between 1,800 and 2,000 people, and even at that size, just felt like such a close-knit community. What I love about JDRF is its focus on the cure but also on the treatment in the meantime—before a cure is successful, and that’s what’s made all the difference in my life. I was once urinating on a stick. Now I’m wearing a sensor and I can look on my phone to see the results. The difference is night and day.”

Steve says T1D is hard for others to understand. While on the outside, Megan looks active and healthy and happy, every day continues to be a struggle—a struggle she has taken on, without complaint, for 40 years.

“It’s such an aggressive disease,” he explains. “It lives with you 24/7. There’s no vacation, no day off, but the sense of community and hope provided by JDRF and this event is just really inspiring.”

Even more inspiring, perhaps, is the story of how the Dragich family has stepped up to give other families access to information, resources, and support—often inviting friends and relatives of the newly diagnosed to be their guests at the annual fundraiser.

But it doesn’t stop there.

The same philanthropic mindset that inspired Megan to hand over her two of her coveted laundry quarters for a worthy cause 40 years ago has resulted in the couple raising nearly $1 million on behalf of JDRF, so far.

“Truthfully, when we started coming to the gala … I didn’t see myself in JDRF,” Megan told the crowd at McCormick Place that evening back in 2015. “I thought it was an organization for children living with the disease—and it is. But it is also about our futures, our children’s future, and for families like ours who have seen the disease change from generation to generation. I don’t want any more generations of my family to face this disease. And I know that with JDRF’s involvement, they won’t.” 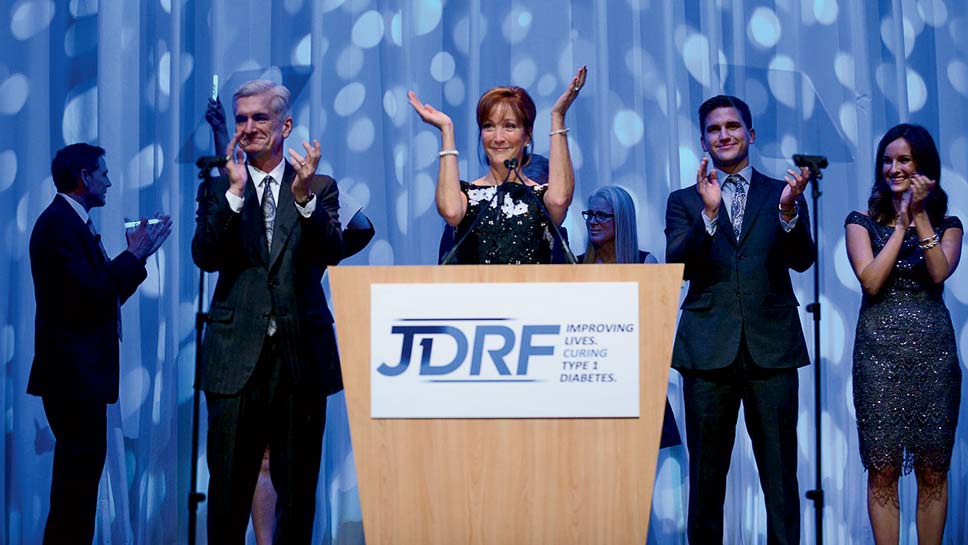 As the 2015 One Dream Gala Fund A Cure family, the Dragichs celebrated the generosity of JDRF supporters and their impact on the type 1 diabetes (T1D) community

Like most nonprofits around Chicago and the Western Suburbs, JDRF is faced with the challenge of how to maintain its annual fundraising goals during a pandemic.

Megan and Steve Dragich say they are impressed with how creative organizers of this year’s “One Dream Gala” at on December 12 have been in orchestrating a virtual fundraiser that is as enticing as it is engaging.

While the nonprofit’s annual event at McCormick Place (complete with big name headline bands, raising $7 million last year alone) will be a hard act to follow, the newly imagined vision is equally captivating.

“Virtually, the concept is to have individual dinners at people’s homes, trying to limit it to 10 people,” explains Megan. “You have a dinner and you get to view what you would otherwise see in person on a big screen TV and they’ll have music and musicians that will play. So instead of being together with 2,000 people, you’ll be connected through the technology.”

Those who buy tickets to the virtual event will have the option of four different catering packages, the popular live auction portion (done virtually), and the same quality of live entertainment (past acts have included rock bands Foreigner and Third Eye Blind).

“We may actually have some live video feeds from some of the parties to check in,” says Steve. “It’s going to be an amazing and impressive night.”

One of the Dragich’s favorite parts of any JDRF gala? Bringing in guests with a newly diagnosed family member and showing them a vast army of advocates that they already have fighting on their behalf.

“We are all one in the fight for the cure,” he adds.

JDRF’s “One Dream Gala” will be held virtually at 6 p.m. on December 12. For tickets and more information, visit jdrf.org/illinois/gala.