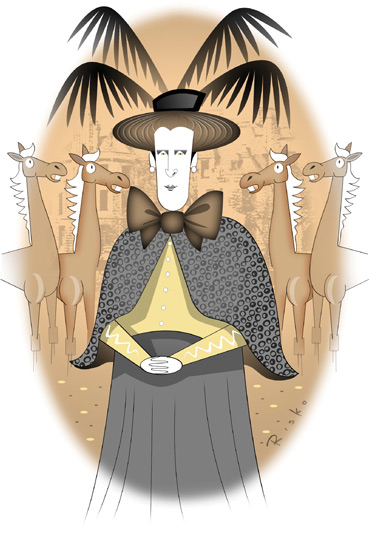 In the summer of 1913, Chicago was hopping. At Villa Turicum— the McCormick mansion north of Fort Sheridan on the North Shore—Harold Fowler McCormick was hosting flying parties. Visitors donned cork jackets over their bathing suits and up they went in the Edith, one of the nation’s only aeroboats. Named after McCormick’s wife, oil tycoon John D. Rockefeller’s daughter, the Edith was flying in large part because its namesake was out of the country.

Harold and Edith (Rockefeller) McCormick were among the nation’s richest couples at the time of their 1895 wedding. From their home at 1000 Lake Shore Drive in Lake Forest, they were a major force in cultural Chicago: helping to establish a resident opera company, founding an infectious diseases institute and journal, and providing 83 acres of land which started Brookfield Zoo. The power couple used their money and influence to elevate Chicago intellectually and culturally.

Like many of Chicago’s elite, they built a summer home in Lake Forest, near the property owned by Harold’s brother and International Harvester partner, Cyrus McCormick, Jr. Sitting on a 300-acre lot, Villa Turicum (Celtic for “settlement on water”) perched on high bluffs overlooking Lake Michigan.

Building Villa Turicum hadn’t been easy. After dismissing designs from James Gamble Rogers and Frank Lloyd Wright—with Edith refusing to even glance at Wright’s sketches—they settled on architect Charles Adams Platt. It took four years and nearly $5 million (the equivalent of $26 million today), but when finished, it was a masterpiece of Italian design. Of the 44 rooms in the main house, 13 were identical master bedrooms, differing only in color. The supporting buildings held 28 rooms for gardeners, 29 for visiting chauffeurs, and a 21- car garage. There were polo grounds and stables, a bowling green, a tea house, and abundant gardens. An elaborate double staircase led down to a beachside swimming pool; those who preferred could take the elevator instead.

But, in 1913, a series of panic attacks and other health issues led Edith to undergo extended analysis with Carl Jung in Switzerland. Jung admitted Edith was a tough nut to crack—calling her brilliant, complicated, and a latent schizophrenic. Edith applied herself wholeheartedly to his practice, becoming not only his leading patroness but also an analyst herself.

With Edith gone, it was a carefree summer for Harold, after years of worrying about her health. Harold came from a long line of tinkerers—his ancestors having revolutionized the reaper—and enjoyed the burgeoning sport of aviation, even developing some airplane designs himself. That playful summer, he installed a pilot in Villa Turicum to offer rides in the Edith whenever the weather allowed; The Chicago Tribune society columnist Madame X declared it was the supreme event in her life. Villa Turicum hosted flying parties, tennis and boating events, and dances. And when Harold had to report to the city for work, he did so in style, aero-commuting down the lakefront.

Edith’s stay in Zurich lasted eight years. The Great War intervened, making travel difficult, but really, she felt safe and productive in Switzerland and loathed a return to Chicago’s pressures. Meanwhile, Harold had fallen in love with Ganna Walska, a mediocre opera singer, and a divorce was imminent.

When she did return, Edith brought along a friend: stocky Austrian Edwin Krenn. Together with associate Edward Dato, they started a real estate company to develop affordable middle-class housing. Krenn & Dato purchased thousands of acres along the new rail lines in Chicago and suburbs, including a large swath of land in Skokie, where they built the Devonshire Manor subdivision and the Meadow Lane Garden apartments.

In the Western Suburbs, Edith’s vision of building a zoological park that allowed visitors to connect with the animals was set in motion. She donated 83 acres of land to the Forest Preserve District of Cook County in 1919, and construction on the Brookfield Zoo began in 1922.

Further north, east of the Old Elm Golf Club, Krenn & Dato built the Highland Park Highlands where the houses had an English feel; the street signs still bear their names. But these local efforts paled in comparison to their plans near Kenosha, where the firm designed Edithton, a utopian community. Though Edithton never materialized, the brochure called for lakefront mansions, an airport, and a university campus with sports facilities able to host a future Olympics. She’d had similar high hopes for Lake Forest; drafting plans with Daniel Burnham for pleasure piers, islands, and harbors. And in terms of Villa Turicum, Edith’s intention was to turn it into the Rockefeller McCormick Museum of Lake Forest.

But her plans were all scuttled. Edith died of cancer in 1932, at age 59, bankrupt. The stock market crash three years earlier, plus her crippling divorce settlement, spelled financial disaster. Though many of her lofty plans never came to be, she left a grand legacy of homes and stories from the North Shore to the city and beyond.