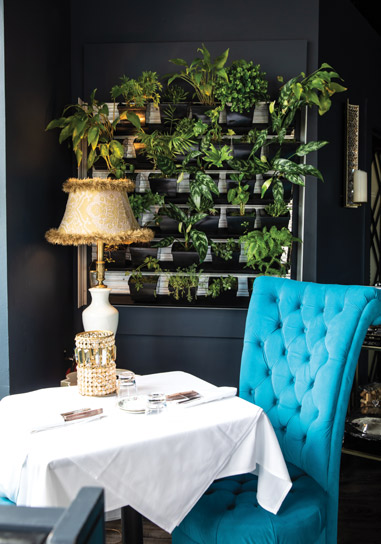 The dining room at Carnivore & the Queen

If you’re been to a “supper club” while on a sojourn in Door County or some other expedition up north, you may think you are prepared for what you will experience when you step into the moody, dimly lit, retro glam treasure of a restaurant known as Carnivore & the Queen in Downers Grove.

Take the quintessential Supper Club Relish Tray, which should accompany your first round of specialty cocktails. You may have sampled a similar throwback platter of forgotten 1960s delicacies like pimento cheese, crunchy veggies, and cornichons before. But this first course of your culinary voyage as reimagined by Chef Chris Matus and his “Queen” (aka Head Chef) Kelli Lodico is unlike anything you’ve ever tasted. The cheese is heavenly and homemade, one of the trays is filled with delicious bacon-wrapped dates, and there is the right mix of olives, cornichons, some fresh bread, a selection of locally sourced cheeses, and diced roasted golden beets. On our recent visit, the tray also included roasted vegetables in a balsamic glaze, elevating the bar-top canape concept to new levels. That alone, accompanied by The Supper Club Cocktail (with Koval gin, muddled fresh raspberries and lemon juice shaken with egg whites), could be a complete meal for some—and certainly the only choice to make during any happy hour visit, either on the recently-introduced “lawn” or socially distanced at the bar.

However, when you’re a first-time guest of Chef Matus and Queen Kelli, you should expect to arrive hungry, linger late into the evening, and leave wondering how Downers Grove got so lucky.

If you can get this husband and wife duo to stop and chat long enough, you’ll hear at least part of the tale of how these two chefs made their dream of opening a contemporary revival of an prohibition- era supper club come true last year—a concept they both attribute to the influence of their mothers, Holly and Georgene, who each insisted on gathering their families around the “supper table” every night.

Chef Matus says he learned how to whip up the scratch-made Italian Meringue pie currently on the menu from his uncle in Pittsburgh when he was 9 years old. Chef Kelli could probably trace the origins of her top-secret Queen’s Blue Ribbon Fried Chicken, a Sunday favorite that sells out every week, to her own memories cooking with her mother and family members.

Theirs is a story as classic as the supper club itself. “I was working for him as a sales rep and we both had a common dream to own a restaurant someday,” she says, explaining that after they got married, she got another job, was unfulfilled, and decided to take the plunge and train to become a chef.

“We both quit our corporate jobs, where we were both very successful, to risk it all and open a restaurant. Everybody thought we were crazy and there were many who didn’t believe we would or could do it.”

To say they have proven the naysayers wrong is an understatement.

What is most remarkable is that each of these chefs has their own one-of-a-kind specialties, not honed from years of culinary school but original creations or reinterpretations of vintage recipes. Other than courses Chef Kelli has been taking at College of DuPage, they are largely self-taught. 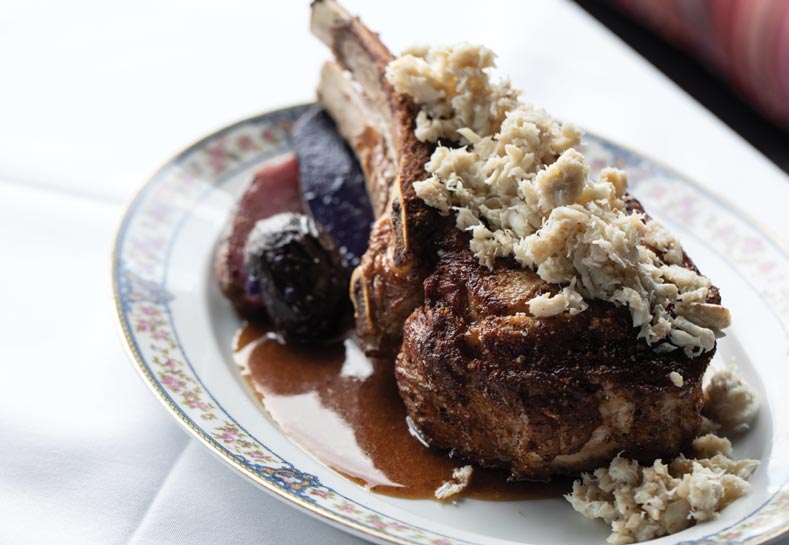 The Blue Ribbon Fried Chicken, for example, is just one of many original recipes you will find on the menu. Another entrée that wowed us was the HONEY … I JUST GOT PAID DOUBLE CUT VEAL CHOP (no, they’re not kidding; it’s in all caps). Like the other meats on this carnivore-heavy menu (some of which you can order via the Hometown Butcher portion of their website), this 22-ounce veal chop is sourced from a farm in Iowa. Simply seared, it’s topped with buttery colossal lump crab and potatoes. 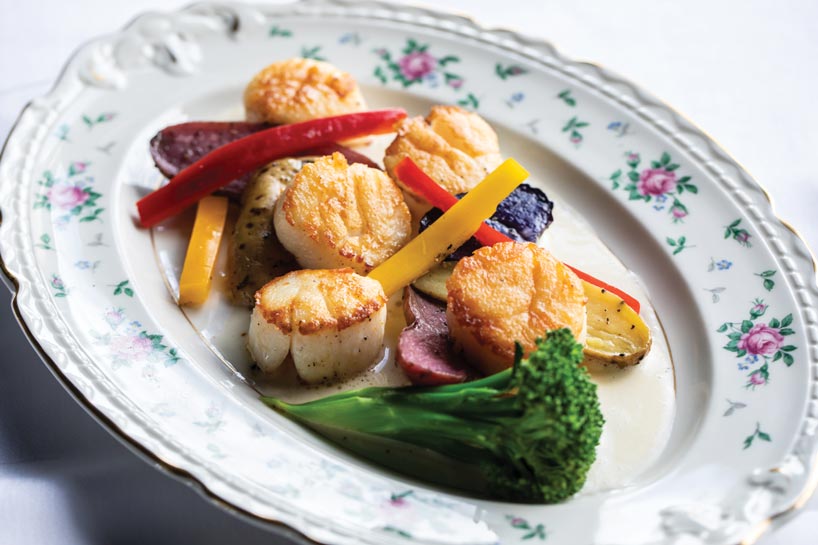 Equally impressive from the seafood side was the Chilean Sea Bass and Provencal Scallops. The sea bass is a half-pound filet seared in white wine butter, shallots, and preserved lemons, then served with seasonal vegetables and house potatoes. The scallops are seared in white wine and then served with microgreens on a lemony beurre blanc sauce. Both are nothing short of spectacular (and yes, that’s really Shrimp Dejonghe on the menu, and even though we didn’t taste it, suspect it might be in the same category). 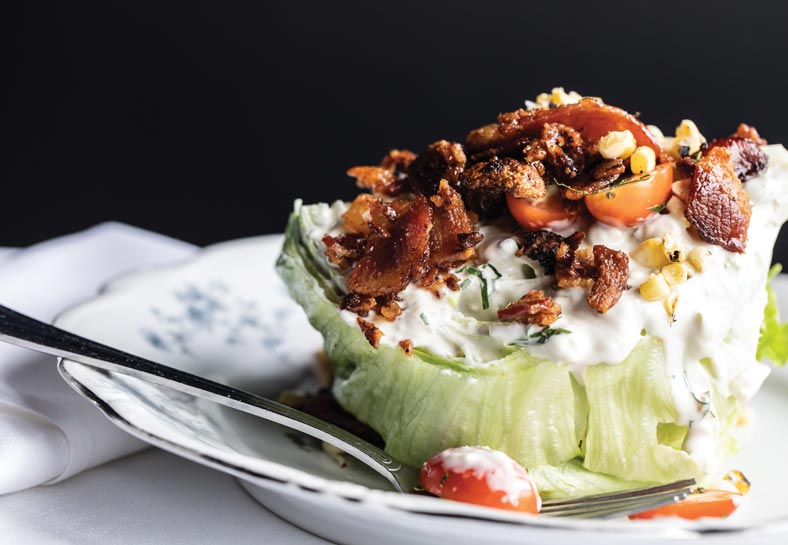 Be sure to save some room between your Supper Club Relish Tray and those decadent entrees for a bowl of Shrimp & Crab Bisque, one of “Queen” Chef Kelli’s family recipes, as well as her version of the classic wedge salad with whiskey glazed bacon and a choice of three original house-made dressings. Our favorite was the Green Goddess, which is also for sale locally at Just In Thyme grocery store.

There aren’t enough good things to say about our inaugural experience dining at the Carnivore & the Queen and if you had to find a flaw, it would only be that there isn’t enough time in one evening (or in one human being’s appetite) to sample the whole menu. What this pair of chefs has created just next door to us in Downers Grove is truly extraordinary. You’ll never think of a “supper club” in the same way again. 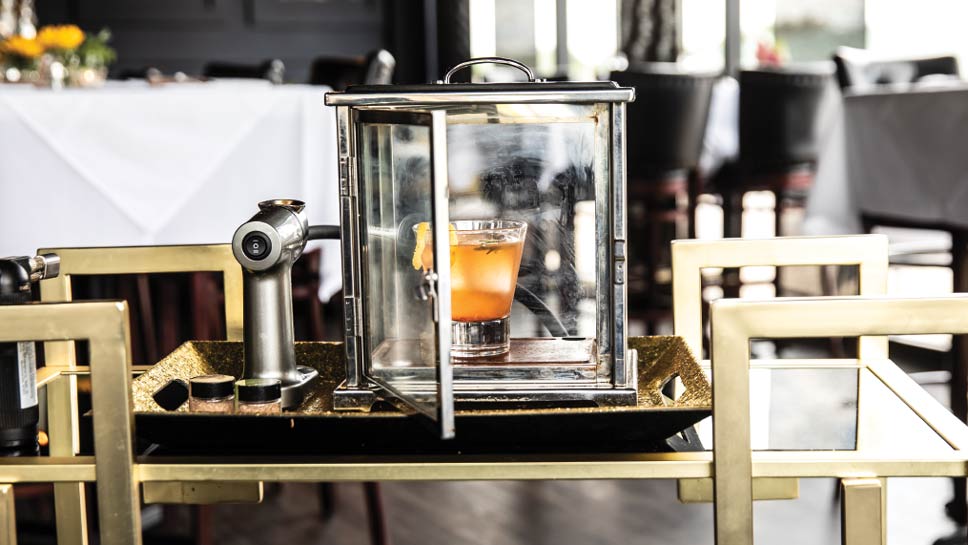 For true mixology fans, the cocktail menu alone is worth the trip. Not only do Chris Matus and “queen” Kelli Lodico locally source a full line of boutique and specialty spirits from around the Chicago area and Midwest, but their take on vintage cocktails is just as inspired as their dinner menu. One of our favorites is: