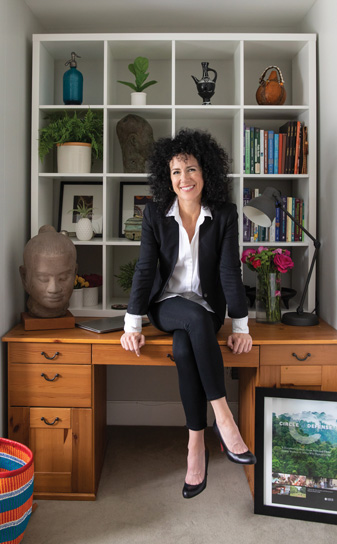 From the early 1900s through the early 1940s, there was another contagious disease outbreak that had parents restricting their children’s exposure to others—particularly during summer months—and brought travel between affected U.S. cities to a halt. There were quarantines and the resulting fear that comes from knowing a single virus could alter your life forever.

That highly infectious disease that ravaged the U.S. was the poliovirus, or polio, but thanks to Jonas Salk’s 1955 vaccine (the first of many, increasingly perfected ones), it was largely eliminated from the Americas by the end of the 20th century. In fact, few people today think of polio as a global health threat at all, regarding it as one of those relics from the past, like the Spanish Flu.

Dr. Kate Vergara of Western Springs is not one of those people.

“Because our polio vaccination program in the U.S. has been so successful, I think that some Americans do not know how devastating it once was here and how important vaccination is to public health—at home and abroad,” says Dr. Vergara, President and CEO of the K8 Global health consultancy who recently produced a documentary film titled Circle of Defense: On the Frontlines of Polio and Ebola.

Born in Hinsdale and raised in Western Springs—where she lived most of her life (other than the 10 years she spent studying at New York University and living in the Peruvian Amazon)—Dr. Vergara’s work took on new meaning recently as the COVID-19 pandemic brought the world to its knees.

“Now more than ever, we need to listen to the public health scientists and base our policies on evidence-based recommendations from the people that dedicate their lives to protecting others,” she says, adding that she has joined the U.S. Medical Reserve Corps to support the COVID-19 response.

Dr. Vergara has also been interviewed on local news programs about the importance of taking social distancing seriously and wearing PPE.

However, most of the time she remains focused on the mission she charted for herself as an epidemiologist nearly 20 years ago— to address infectious diseases in developing countries. Dr. Vergara, who has both a masters degree and a Ph.D. in Public Health, has worked on four continents with some of the world’s most vulnerable populations.

“For the last 20 years, I have been working on infectious disease burdens in emerging economy settings. I fell in love with public health in Peru,” she says. “During my Fulbright Scholarship year there in 2003, I studied tuberculosis and intestinal parasites in a remote Amazon village near the border of Peru, Brazil, and Colombia. It was a life-changing experience.”

Five years ago, she began tackling vaccine-preventable diseases in six countries in Africa and also India, primarily focusing on polio eradication. And in 2018, she and Theresa Jarka started Champion Media Productions to help shine the spotlight on these critical public health and humanitarian causes.

“We are a boutique video and photography production firm dedicated to international humanitarian causes around the globe. We will bring your projects into focus for your organization and supporters,” explains Dr. Vergara, adding that she is honored that their Circle of Defense documentary was selected for three film festivals so far this year.

According to the film synopsis, the developed world is all but polio-free, yet it still lingers in war zones and remote regions of West Africa. It also posits that until polio is eliminated from the globe, the potential for outbreak exists anywhere.

Circle of Defense also looks closely at the community health infrastructure in Nigeria and Sierra Leone, the health workers there, and how they are task-shifting in the case of Ebola and other emergent diseases. “We follow polio and Ebola survivors, community health care workers on the ground, as well as experts from stakeholders around the world, including the World Health Organization, UNICEF and Rotary International,” she explains.

In these unprecedented times, what Dr. Vergara is doing both locally and abroad is a monumental task for any one person. And yet, she manages to try to save the world while also being mother to two boys in Western Springs—ages 14 and 12.

“I wrangle my two beautiful, brilliant sons and love to take them with me on my international work. They have been to Africa a couple of times and also South America,” she says. “Last time we went to Ethiopia, they organized a donation drive at their schools in Western Springs to collect multivitamins and school supplies for orphans in Addis Ababa. I was so incredibly proud of them. We brought over 600 pounds of supplies to the kids.”

In her rare moments of down time, Dr. Vergara balances her life with exercise.

“The best way for me to keep up with my boys and manage stress with demanding work is to be active and work out,” she says. “I started out just jogging a bit, but as the stress increased, so did my distance. At this point, I am a five-time marathon runner, avid triathlete, and Ironman 70.3 athlete. If COVID-19 keeps increasing the stress, I may have to do a full Ironman soon just to keep sane!”

Regarding that particular virus, and the pandemic that grips our planet, Dr. Vergara points to the lessons she has learned from studying other infectious diseases around the globe—and to one of the driving messages of her film.

“While the international health community cannot predict what the next outbreak will be, they can plan for how they will respond. This is legacy planning, and it is our best line of defense in supporting community health workers and preserving the response infrastructure.”

For more information about the Circle of Defense documentary and to get on the list for news of the Chicago premiere, visit circleofdefense.com.