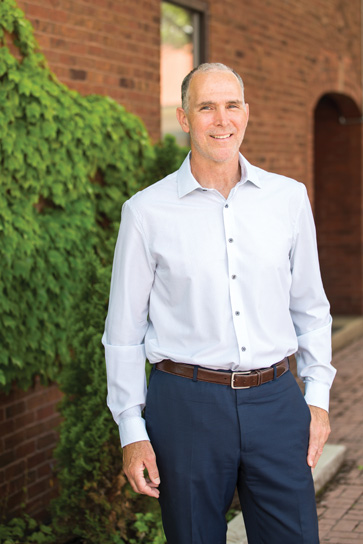 In 1988, Mike McCurry’s back caught up with him. Having played college football at Indiana University and professional football for a short time with the Minnesota Vikings—along with a few years in the Arena League—a nagging back injury and the potential for surgery led him to retire.

Through a friend he landed a coaching position at Hinsdale Central High School, and eventually decided to get his real estate license, a decision that has led to a successful, 30-year career in real estate investing and sales.

“The caliber of the athletes in high school was not what I was used to being around. It was college that I was used to being a part of and that was very intense,” McCurry says. “I looked into becoming a real estate investor, started studying investing, spending time around people in the field. Then, I bought my first house in Hinsdale and rented it out.”

While the path from football career to real estate investment career may seem unconventional, McCurry says it’s the teamwork and commitment to win that links the two together.

“I’ve always looked at sports or business as not an individual idea but a team idea,” he says. “There are so many lessons to be learned on the field, especially in team sports, that translates into being in a group or a team that has to be accountable and produce something of value.”

McCurry notes that as with sports teams, his real estate team, Mike Mc- Curry Group of Compass, spends a lot of time together and that it’s the group’s effort to support each other that makes them successful.

Over his 30-year career, McCurry, who was raised in Indianapolis, has established deep roots in the Hinsdale/ Clarendon Hills area. He met his wife, Amy, at the annual Fourth of July Parade in Hinsdale and a year later, as the parade’s marshall, took the authority to halt the parade briefly so he could propose. Together, they’re raising their four children in the area.

“I had choices to put my license in other towns, but I interviewed around, and I really liked the people here,” he says. “It’s much different than where I grew up, but I just like the friendliness and the influence the people have to make a difference.”

McCurry is heavily involved in Christ Church Oak Brook and many of his clients derive from his church network. This bond of faith allows him to establish long-term relationships with clients, and 74 percent of his business is from clients he’s worked with already.

Faith is a primary driver behind McCurry’s approach to the real estate business, which he says is rooted in integrity and transparency and giving clients honest assessments of investing and buying opportunities.

“I went through one of the worst markets that we’ve ever had, but I was still able to help many families buy and sell during that time because I was a truth teller and helped people get ahead of the bubble,” McCurry says. “Then when the bubble burst, we got ahead of the competition because I was honest and transparent.”

McCurry adds, “Integrity is part of my belief structure, and I don’t need to sell the sale if it’s going to jeopardize that structure.”