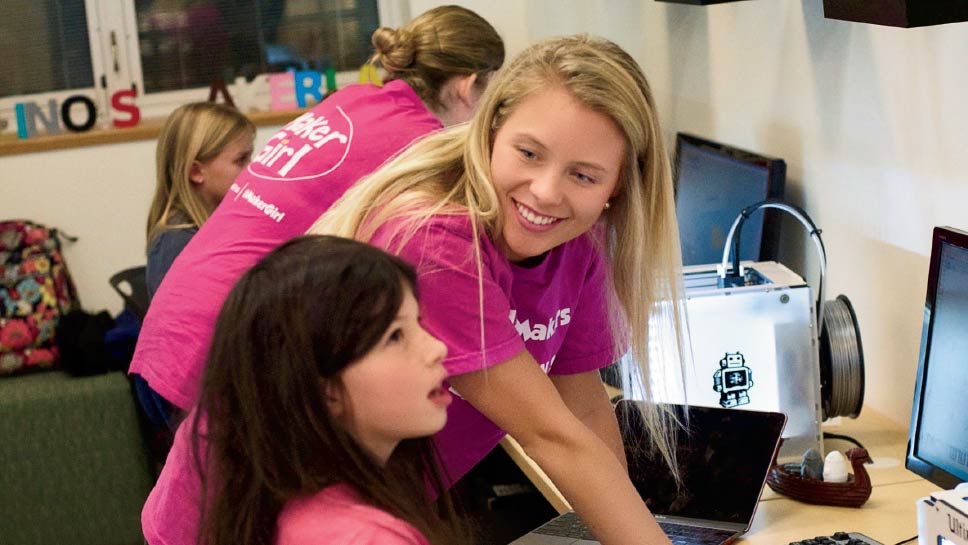 Growing up in Clarendon Hills, Julia Haried was homeschooled through the eighth grade. Describing her younger self as having boundless energy—”I was ready for life,” she says—and always being up for anything, she was not exposed to the gender biases often found in traditional coed classrooms. Perhaps that’s one of the reasons she is unapologetically ambitious. It might also explain why the lack of female representation in C-suite positions is something she is determined to change.

Haried, 27, and her business partner Lizzy Engele are the co-founders and executive directors of MakerGirl, a nationwide Science, Technology, Engineering, and Math (STEM) 501(c)3 not for profit that educates girls through 3D printing workshops. The seeds of their organization were planted when the two were enrolled in a social entrepreneurship course at the Gies College of Business and the School of Social Work at the University of Illinois at Urbana-Champaign. Students were asked, “What bothers you?”

For Haried, that simple question yielded a simple answer: a dearth of women in the corporate world’s upper echelons. However, the solutions were—and still remain— complex. MakerGirl’s particular approach is to reach girls at a specific, critical time in their learning and development. 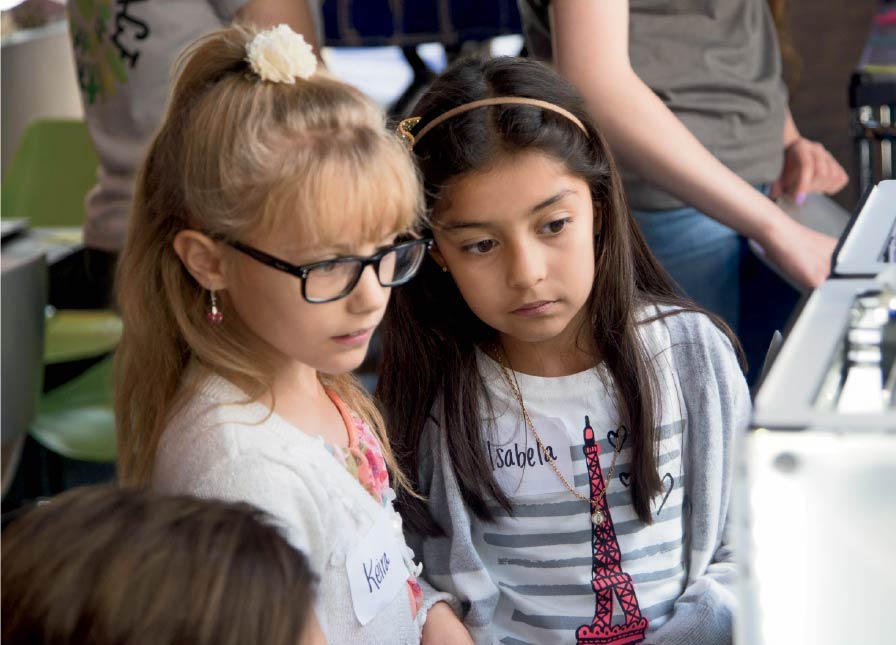 MakerGirls at a 3D printing workshop

“We work with girls ages 7-10 because that’s when they start understanding social contexts and influence from outside perspectives,” explains Haried. “If young girls’ moms, aunts, or caretakers aren’t in a STEM field, then young girls don’t see STEM as a possibility. It’s also when girls start saying ‘no’ to things if they don’t see their friends doing it, or they don’t think it’s cool or meaningful.”

Haried, who grew up with two older brothers, an educator mother and lover of the arts, and a nuclear engineer father, was mostly spared from these subtle, negative influences. But she still knows that females face a unique set of challenges, from the classroom all the way to the boardroom.

“Girls learn differently and at different paces,” she says. At MakerGirl, workshops are typically two-and-a-half hour sessions that are broken up into three parts. First, girls take time to draw what they want to print; next, they tinker with the design and manipulate shapes and sizes on a computer-aided design software, Tinkercad; finally, they print the item with an Ultimaker 3D printer, and learn how the technology behind the printer works. Results are sometimes imperfect, but that’s beside the point.

“Failures are a matter of something not working the way you expect it to, or it not meeting your original expectations,” says Haried. “If you look at many of the brilliant thinkers recognized in modern civilization, they ‘failed’ all the time. But they are still looked at as leaders because it allowed them to focus even more and find new opportunities. This is exactly the mentality of a #MakerGirl.”

It’s not that Haried puts pressure on each and every MakerGirl to become the Next Big Thing. “Our goal isn’t for everyone to become a scientist or engineer,” she says. “We want them to see it as a mentality shift—it’s about the opportunity to make things and solve problems.”

Haried leads by example, juggling her MakerGirl duties with a full-time job as a consultant at a large consulting firm in Chicago. Starting with zero experience in raising capital, she and Engele managed to raise $30 thousand for their start-up via Kickstarter, followed by an additional $15,000 in a second fundraising campaign. MakerGirl, which began with seven young girls in the Champaign-Urbana area, now has six MakerGirl Academies throughout the country, and has served almost 4,000 girls. In addition, a #MakerGirlGoesMobile initiative offers 3D printing sessions in rural areas and socioeconomic diverse communities.

How does she manage to do it all? For starters, Haried and Engele added full-time Executive Director Mary Hadley to their team; they also have a 13-member Board of Advisors to assist with their expansion. But it’s hard to deny the fire in Haried’s belly, which hasn’t dimmed since that life-changing college course in 2014.

“If something is important to you, you’re going to find the time and make it happen,” she says. “This is an issue that affects both men and women, and important to society’s growth and prosperity.”