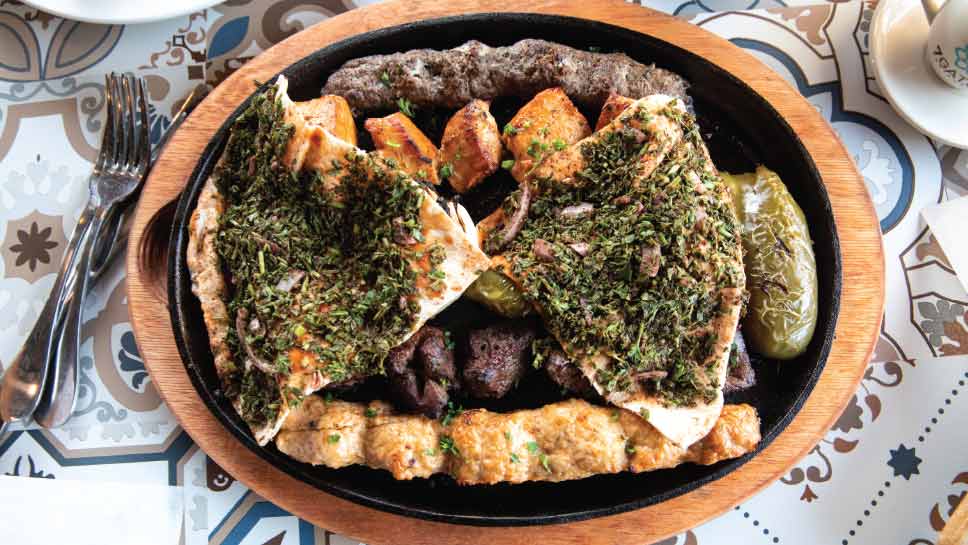 7 Gates in Countryside provides a rare glimpse into wonders of the Syrian table. Mashawi, a grilled meat platter. PHOTOGRAPHY BY ROBIN SUBAR

I have become what some might refer to as an “inquisitive diner,” which is a polite way of saying I often fire questions at poor unsuspecting servers with an intensity usually reserved for police interrogation rooms and presidential news conferences.

Fortunately, seasoned severs know that food-prep questions are generally coded compliments—an interested diner’s way of saying that the food they’re enjoying is so unique that they hunger to know more about its origins.

Who would be compelled, after all, to ask questions about yet another wedge salad or ramekin of crème brûlée? The opposite can be said for the dishes from 7 Gates, an impressive new restaurant in Countryside, which presents a tantalizing taste of Syria. The menu includes items you’re unlikely to find anywhere else this side of Damascus: razor-thin flatbreads smeared with a minced-meat spread called sfeehah bil laban; star-shaped savory pastries called manakeesh, which look and taste like mini Syrian pizzas; and one-of-a-kind Syrian ice cream that seems almost incapable of melting.

Owner Joe Salhani has done an admirable job of dressing up the space with a dazzling array of priceless family heirlooms, which would make any Middle Eastern antique dealer faint with envy. Three hundred-year-old copper trays hang on the walls. An ancient hand-carved mother-of-pearl furniture chest doubles as a hostess stand. Plus, hand-pounded copper pieces glimmer at every turn. 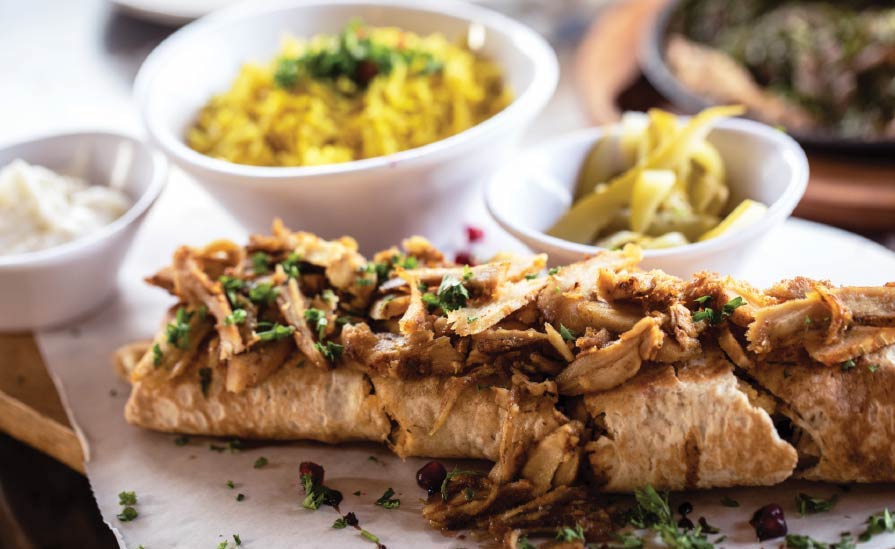 Chicken shawerma wrapped in saj with garlic sauce and pickles

Fortunately, the quality food is just as transformative, which is why I kept peppering our dutiful server with questions after every forkful. The aforementioned sfeehah bi laban, for example, is set on an ultra-thin flatbread, which crunches like the exterior of a breadstick sans its airy center. It’s topped with yogurt-based paste of minced beef or lamb sprinkled with seven secret Syrian spices. The result is like a Middle Eastern take on bone marrow and toast, with an added kick of vinegar and sweet bits of pomegranate seeds.

The star-shaped manakeesh pastries are topped with a crimson dip called muhamarrah, made with red pepper, walnuts, cumin, and black nigella seeds. It’s as fun as dipping soft bread sticks into marinara, only this version has the sharp bite of Aleppo peppers and an almost za’atar-like complexity.

Those same warm flavors are evident in the kitchen’s fantastic lentil soup. Made with nothing but olive oil, expertly ground lentils, cumin, and lots of onions, it’s texture is more like cream of wheat, but it’s incredibly fragrant—expect fresh allium on the nose—and fitting medicine for any cold Chicago winter evening.

One taste and you’re likely to ask the same question I did: Syria, where have you been all my life? Salhani, who’s been in the United States for 30 years, says Syrian migrations away from home were rare in decades past. As a result, Syrian food is a little like the Switzerland of the Middle East, a dynamic food culture that seals its secrets inside its borders. 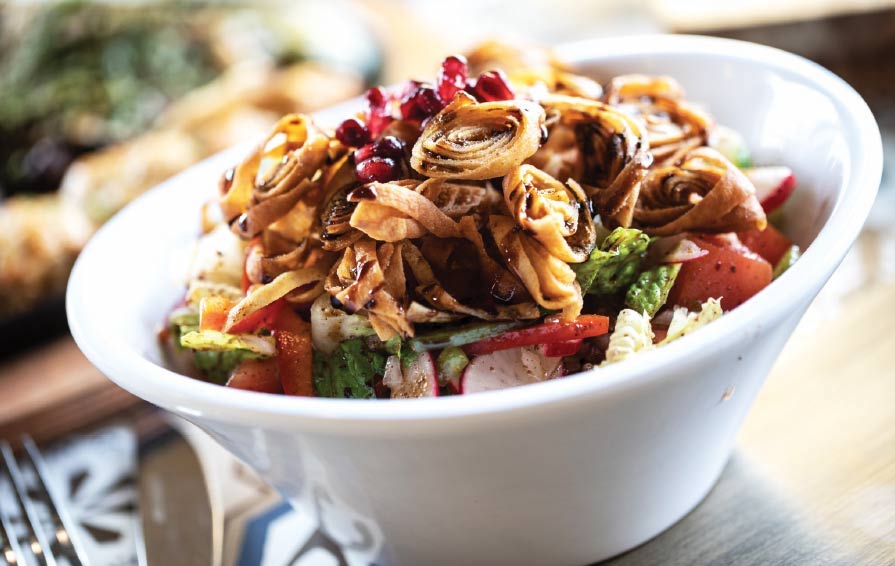 Much credit goes to Salhani’s choice of brick ovens, which create heat through dual burners, unlike Italian versions which tend to use only one heat source. This fierce heat lifts temperatures so high and so fast that the house pita and crisps up in mere seconds, creating a wonderful crunchy shell and pillowy interior.

It also explains the why the house’s mashawi, or delicious grilled meats, are so juicy. The kitchen’s mixed grill is the dish to order: a four-meat combo of chicken and lamb—served in cubed form, as well as ground and shaped into patties (known as kufta)—accompanied by fire-roasted vegetables and your choice of rice, bulgur, or French fries. The only thing more surprising was the quality of 7 Gates’ saj wraps—a Middle Eastern tortilla-like wrap that we had stuffed with shawarma, pickles, and a yogurt-based garlic sauce.

If there’s a flaw to be found at 7 Gates, it’s how unassuming they are about their fantastic ice cream. Had I not bombarded my server and Joe with enough questions to write a cookbook, I would have assumed it was just Americanized ice cream.

Fortunately, they convinced us to try it, and I will never look at a pint of Häagan Dazs with the same lust again. It’s made with milk, mastic, and salep—a flour made from dried orchid roots that acts as a natural stabilizer—and cooled into giant oval shaped blocks, sort of like what a slab of fudge looks like at Mackinac Island. Warm roasted nuts (in my case, pistachios) are folded into the ice cream. The results are beyond compare, like eating a pistachio drenched ice cream bar without the chocolate, not overtly sweet but festooned with bits of salt and earthy notes. 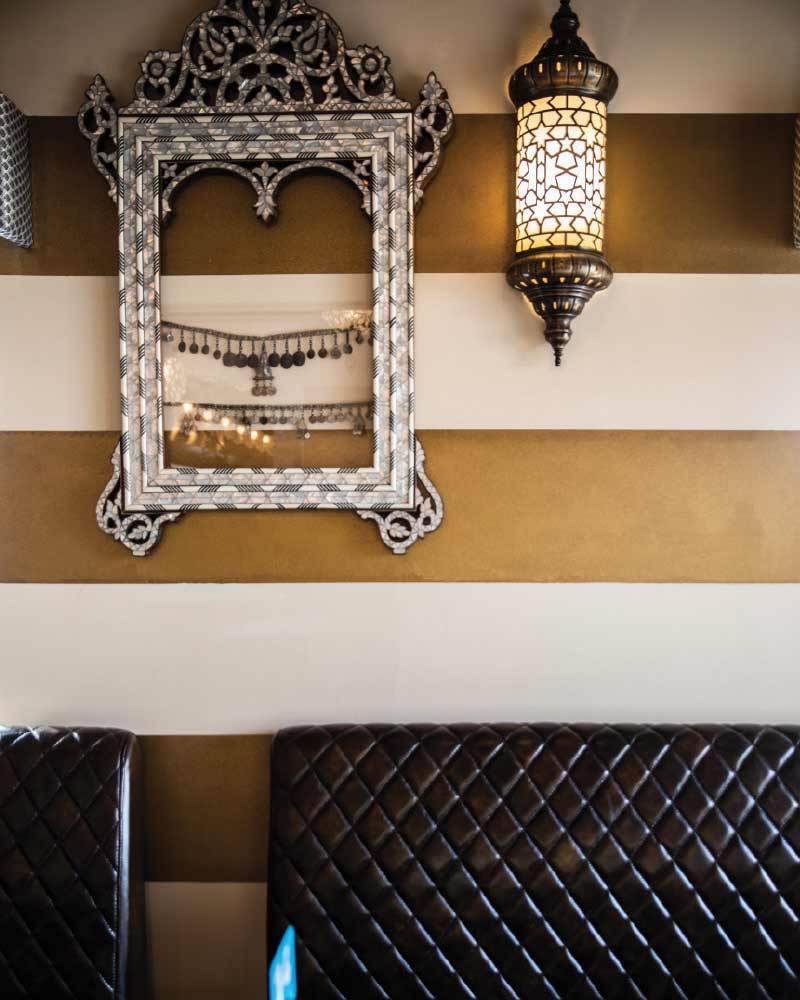 The dining room is decorated with family heirlooms and exotic imports.

Needless to say, it’s a meal that conjures up hundreds of more questions. Luckily, I know exactly who to turn to for the answers.