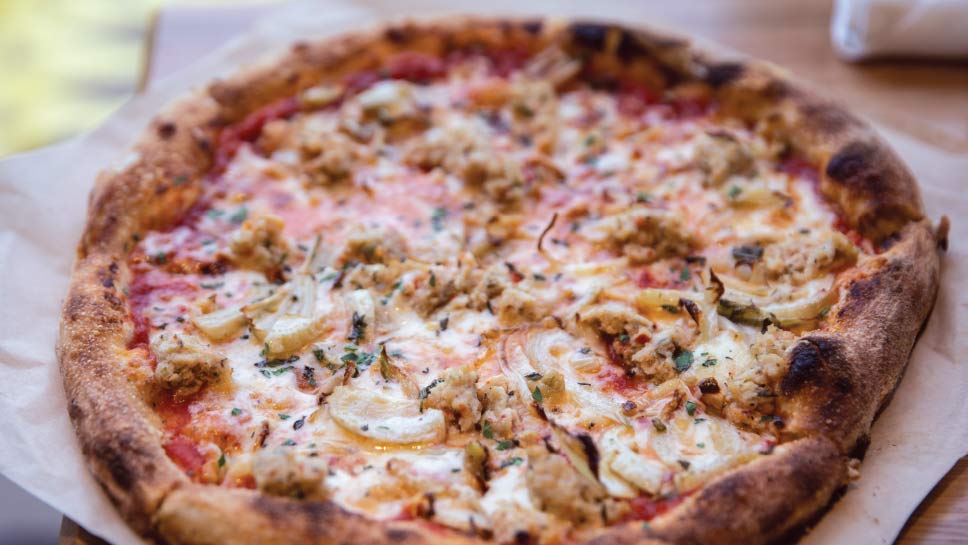 There was a time, not too long ago, when I would’ve recoiled in horror at the sight of any menu that included the phrase “cauliflower polenta.” Where I’m from, such kitchen transgressions have the potential to invoke ghostly hallucinations, chief among them visions of my dearly departed Italian grandmother decreeing to me in no uncertain terms, “You no make polenta with cavolfiore. No. No. No.”

But there I was, sitting comfortably at the chic new True Food Kitchen in Oak Brook, staring at a menu showcasing, of all things, a plant-based polenta. Served in a bowl no less. As an entrée. With enough veggies—broccolini, edamame, snow and snap peas plus zucchini and watermelon radish—to fill half a salad bar.

My older and far less enlightened self would’ve cast a protest vote by ordering the greasiest protein offering on the menu and calling it a day. But that didn’t happen. When one finds oneself in a restaurant co-founded by Dr. Andrew Weil, the principle architect of the anti-inflammatory food pyramid, one should eat as the Weil-ians do.

To my surprise, some moments later, I found that I’d licked the bowl clean. Turns out, True Food’s cauliflower polenta is a revelation: a silky, smooth puree of riced cauliflower, cashew butter ,and garlic spread—spiked with turmeric and miso—that captures the buttery umami-kissed goodness of what you’d expect to find at a dinner table in Lombardy or Trentino.

I am, officially, a cauliflower polenta convert, which proved to be one of many surprisingly tasty anti-inflammatory hacks whipped up in True Food’s kitchen.

For all its less-than-subtle signage, including a giant tree mosaic composed of colored beans and a revolving sign that cycles through different images of heirloom carrots, True Food Kitchen is not your great Aunt Zelda’s plant-based, pro-vegan diner. The phrase that Brand Chef Robert
McCormick uses—“vegetable-driven bistro”—is just about right, as carnivores can still enjoy plenty of healthy proteins, including grass-fed hamburgers, chicken sausage pizzas or teriyaki steak quinoa bowls.

McCormick’s impressive pedigree, which includes stints with two of the best mentors you can imagine (chefs Gunter Seeger and Daniel Boulud), ensures that the restaurant’s healthy aura doesn’t shine so bright that it blinds the kitchen to the importance of delivering tasty food. 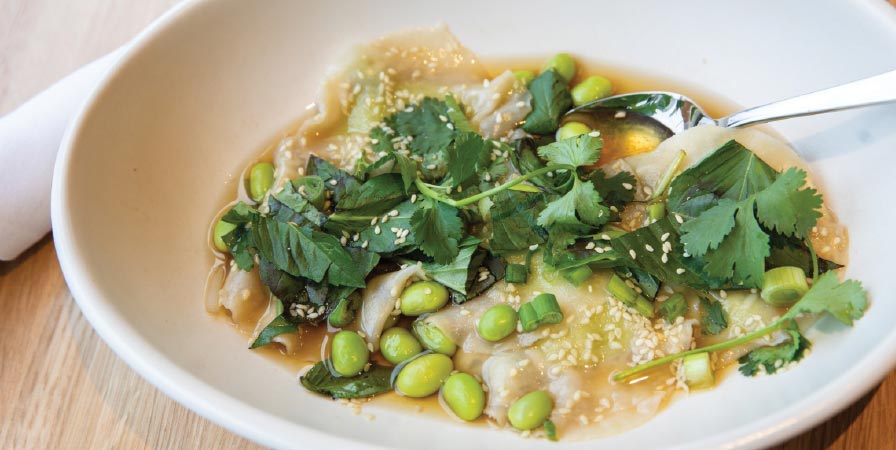 Although True Food works hard to source produce when it’s fresh and in season—as just about every chef-driven restaurant does these days—it does take some additional steps to ensure its menu gives off a healthy glow. Fruits and vegetables that have the potential to come in contact with high amounts of pesticides—think spinach, kale, apples, grapes, peaches, and tomatoes—are sourced from organic producers. But what’s even more interesting is the way McCormick artfully swaps in healthy ingredients for less savory options without sacrificing flavor.

Take the house’s hearth-fired pizzas, which are made from a dough kneaded with flaxseed and whole wheat flour. Unorthodox? Maybe, but they deliver. They look and crunch like a Neapolitan pizza, but boast the health profile of a Middle Eastern pita. Knowing that your typical carb-rich pizza will spike anyone’s blood sugar higher, McCormick adds some healthy kuzu root, then makes a sauce made from organic crushed tomatoes topped with bits of chicken sausage. The result is one the healthiest pies in town.

We enjoyed a number of other feel-good indulgences, chief among them an edamame-stuffed dumpling set in a graceful dashi broth made with kombu and a touch of soy. Oversized ravioli are as beautiful as they are delicious—almost translucent in the center—so you can see the their central hub of spring-green puree hiding beneath the dough.

McCormick knows that the right shock of flavor here and there can turn even the most pedestrian of dishes memorable. Note the bits of pickled mushroom that surround the house’s Thai coconut sea bass, which sits in a gentle pool of coconut-turmeric broth with plenty of green beans and rainbow chard. Bite into one of those ’shrooms and you get a shot of acidity that disrupts the gentler notes of the Asian-inspired broth.

And then there’s the sweet treat of the season: a squash pie made by binding caramelized butternut squash with arrow root (a clever binder) and spiking the mix with brown sugar, cane sugar, and winter spices. “We add a little brandy for good measure,” says McCormick, “and we top it with a coconut whip so it’s completely vegan and completely gluten-free, which makes everyone feel a little less guilty afterward.”

Guilt-free? Truer words were never spoken, especially when it comes to my newfound obsession over cauliflower polenta.