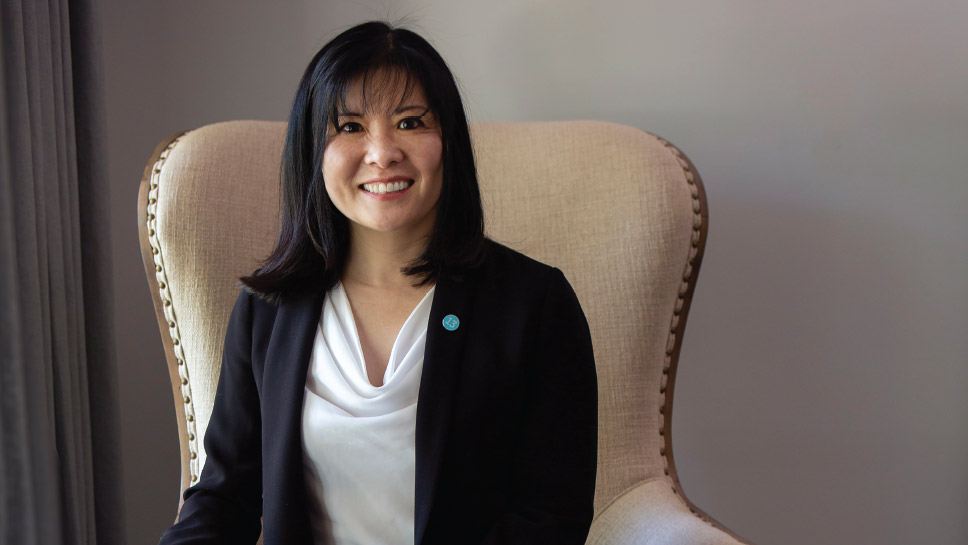 Reclaim13 and Cherish House join with the Western Suburban community to wipe out child trafficking.

She remembers the day clearly. Sitting in a meeting in an Evanston office, clinical psychologist Cassandra Ma heard the voices drone on, discussing, dissecting, debating, and rebutting theories on why students weren’t doing their paperwork properly.

“Yes, paperwork,” Ma recalls. “Sure, the issue needed some attention. But I couldn’t stop thinking about a much bigger crisis—the sexual exploitation and trafficking of children.”

The night before, Ma had attended an event for the International Justice Mission, an organization that works in developing countries, and had
learned in unforgettable detail about the immense tragedy of child exploitation and trafficking.

“I looked up in that morning meeting, saw the clock at 9 a.m., and thought to myself. ‘It’s the middle of the night in Southeast Asia and right now, while we are discussing paperwork, hundreds of little ones are behind closed doors experiencing a night of hell’,” she says. “In that moment, I knew I had to do something much more.”

So, Ma finished out the year at her position, and set out on a path of radical change. That path would lead her to found Compassionate Communities for Children a 501(c)(3) agency to end sexual exploitation (later renamed Reclaim13) and, to open Cherish House, the only specialized (“safe”) house in Illinois for minor victims of sex trafficking.

Getting there took a lot of research and resolve. At the start, Ma, who had worked at the Family Institute at Northwestern University, teaching marriage and family therapy to graduate students, had a clinical practice, and had worked with many survivors of sexual abuse and trauma.

But she knew little about what could be done to rescue children from trafficking. In the beginning, she felt such urgency to help victimized youth, that she drove up and down Chicago streets and alleys, searching for runaways. Knowing she needed a more sustainable plan, she dove into research, learning everything she could about the issues at hand, and the organizations in Illinois doing work to help child victims.

“I learned so much, especially about the connection between child sexual abuse and child sex trafficking. And it’s the children who have been sexually abused, precisely because this kind of trauma is shrouded in secrecy, that are then the most vulnerable to ongoing sexual exploitation and trafficking. All the youth we have helped at Reclaim13 had histories of sexual abuse prior to sexual trafficking, all were trafficked before they were 18, and it happens not just in underprivileged communities, but everywhere. In Hinsdale, Plainfield, Downers Grove—everywhere.”

To turn all of this on its head, Ma developed an exploitation-prevention curriculum based upon clinical experience and research, to equip children, parents, and communities with information they need to be aware of sexual abuse and exploitation, and to protect children from further victimization. She also solidified her determination to establish a safe house for exploited children.

Ma formed a board with three friends, and did a needs assessment to determine how best to address the unmet needs of sexually abused and exploited children. They also determined what was needed by law enforcement, DCFS, and the legal community. With all of this in hand, she began working to get the proper certifications (both a Child Welfare Agency License and a Group Home License) and launched her nonprofit in 2012.

“We rebranded as Reclaim13, because 13 is the average age that children are drawn into trafficking,” Ma explains.

Aware of how difficult it is for volunteers to sign on with existing organizations battling child exploitation, Ma ensured that Reclaim13 would welcome volunteer efforts.

“We are very proud of the fact that for our first several years our organization was entirely volunteer run,” says Ma. “We believe in the ability of community and volunteers to entirely end the sexual exploitation of our kids.”

Currently Reclaim 13 has nine different volunteer teams allowing vetted individuals to engage in myriad ways, from creative arts to fundraising to research and policymaking. Reclaim13 efforts focus on Prevention Education and Community Engagement. Cherish House offers a therapeutic environment for holistic healing, so girls with highly traumatized histories can move into productive futures. Reclaim13 also offers a mentoring program, both for residents of Cherish House and for community survivors of sexual abuse, exploitation, and trafficking—both minor and adult, helping each individual move towards his/her life goals.

Privately funded through the support of corporations, churches, community organizations, and women’s groups, Reclaim13 raises a significant amount of its support through its annual fundraiser. Happening this year on October 5 at the Westin in Lombard, the “Cherish the Dream Gala,” will celebrate successes, share long-term plans, and give supporters the chance to come together for an evening of fun and community.

For more information on how to support Reclaim13, to participate its volunteer or mentor programs, or to attend the gala, please visit reclaim13.org

Reclaim 13’s new partnership with Metra extends a powerful new lifeline of hope for sexually exploited and trafficked youth. Starting this summer, posters featuring photos of teens and tips on how to get help will be prominently displayed on all 11 of Metra’s train lines, including the number for Reclaim 13’s 24/7 hotline, as well as the info for a new text line, where kids can call or text for help.

The Metra/Reclaim13 campaign grew organically, out of a video called “The Path” that Reclaim13 created through a grant from the Naperville Rotary. The video was shaped to inform kids before they are drawn into trafficking, about how to identify traffickers and their ploys. The father of the actress who plays the part of the teenage victim in the video, is a Metra train conductor.

“When he learned that traffickers sometimes use Metra trains as the vehicle to transport kids to and from appointments with johns, he was appalled,” says Cassandra Ma, executive director of Reclaim 13. “He spoke to the president at Metra and that quickly led to a meeting with the board which asked how they could help Reclaim13 combat trafficking.”

In addition to the posters on trains, Reclaim13 will be conducting a training program in collaboration with Cook Country sheriffs, to alert Metra police, conductors and ticket agents about what exploitation looks like and how to recognize potential victims.

“We are very optimistic about what this can do to help kids who are in danger, or are already being trafficked, find help,” says Ma.