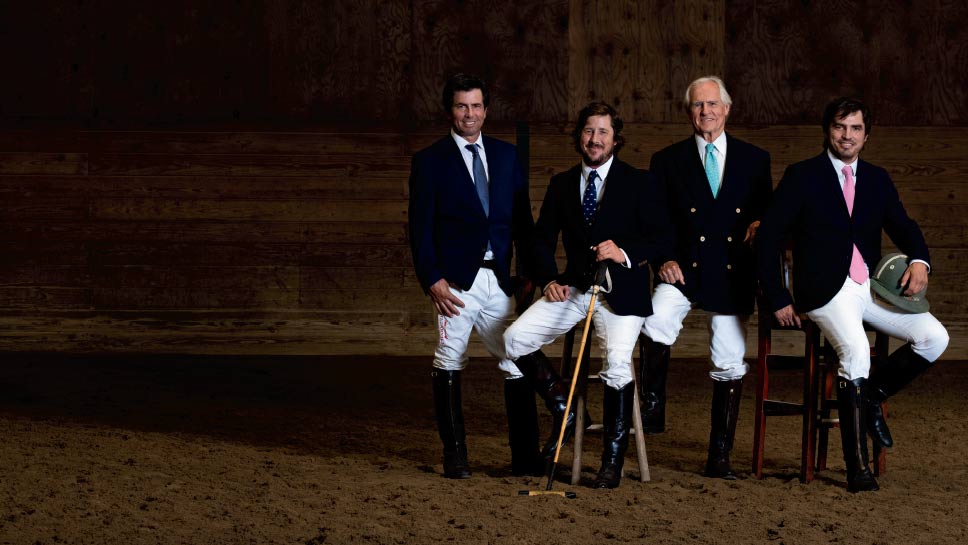 For nearly a century, the ancient sport of polo has been played in Oak Brook, luring dignitaries and royalty to our otherwise humble West Suburban confines. With the 2019 season in full swing, we spent some time with the Oak Brook Polo Club team for a behind-the-scenes look at one of the most elite parties in the world. PHOTOGRAPHY BY FRANK ISHMAN

In full uniform, these men are a force of nature. Mysterious, handsome, and pros at one of the oldest games on Earth. They could be anywhere. Spain. Portugal. Buenos Aires. So many options for those who have reached this prestigious, elite, and hard-earned level in what is better known as the “sport of kings.”

In fact, Argentinian polo players Tomas “Toto” Obregon and Mariano Gutierrez (yes, the one from the 2009 Britney Spears video for “Radar”) played not too long ago in the Normandy coast city of Deauville in France (think silky beaches, 1920s glam, and the birth of the Impressionist/Fauvist movement).

But when it comes to the open field, fast horses, and the thrill of the match, there is no place these international polo superstars would rather be than Oak Brook Polo Club. 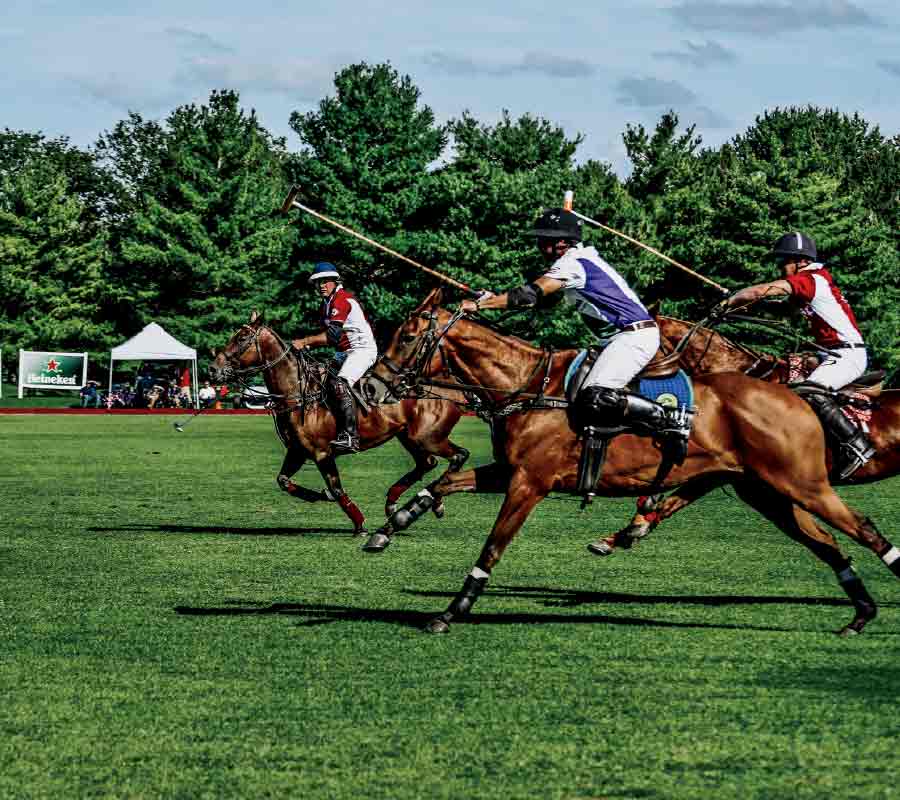 “Oak Brook Polo is the best,” says Gutierrez, shy and humble, shrugging off the sexy video appearance with Spears as if it was just another insignificant, off-season side gig. “I love everything about it … from the people running the fields to Jim, who’s trying to promote polo and get it back to where it used to be, this is my home every summer.”

The Jim he speaks of is none other than teammate Jim Drury, the lean, mean 70-something-year-old player who single-handedly utilized his business acumen to save Oak Brook Polo Club from the verge of extinction in 2015 and reinvigorate the organization for the next generation.

It’s a story we told in our May issue of Hinsdale Living but it’s long been well-known for those who follow the U.S. polo scene—as is the story of Paul Butler, the local businessman who founded what would become Oak Brook Polo Club in 1922. 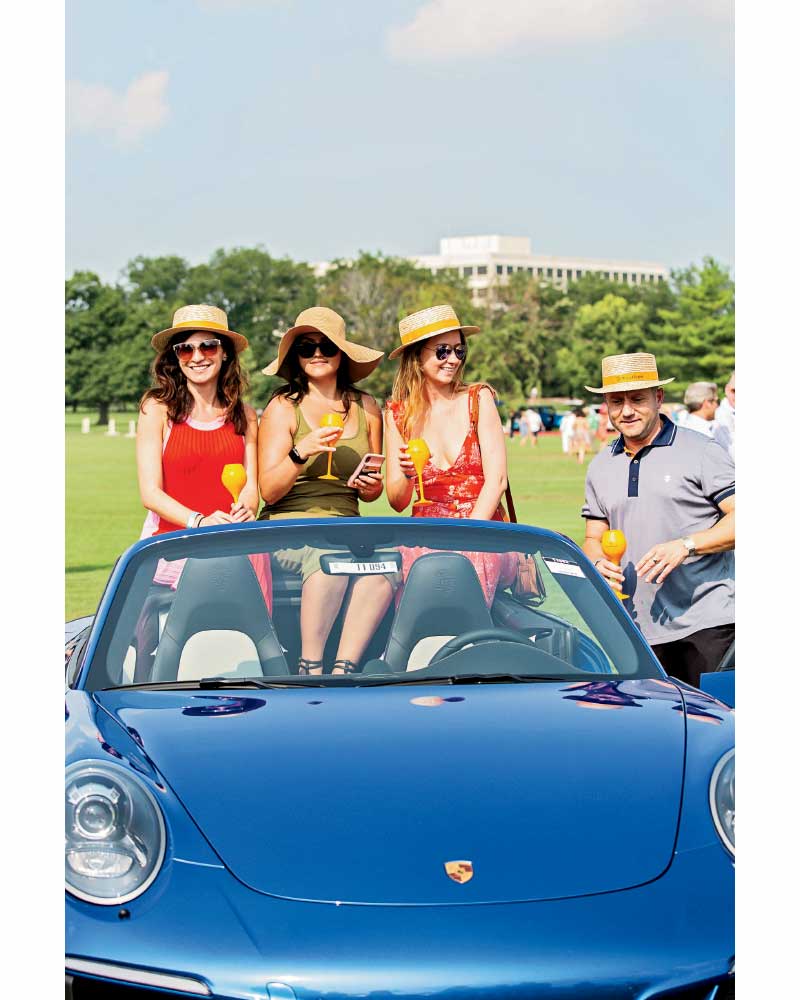 Regarded as one of the oldest polo clubs in the United States, Oak Brook Polo Club served as home to the U.S. Open Polo Championship for 24 straight seasons and other prestigious international and national polo tournaments. For generations, it’s been a popular Sunday tradition and social scene known for entertaining Hollywood celebrities, dignitaries, royalty, and the most distinguished Chicago residents. And thanks to the efforts of players like Drury, it’s going strong into the 21st century.

The Oak Brook Polo Club plays every summer on the Prince of Wales Field, which is adjacent to the Butler National Golf Course and The Drake Hotel in Oak Brook. Regal Sunday polo matches continue to attract thousands of spectators who marvel at the athleticism and majesty of this timeless sport. 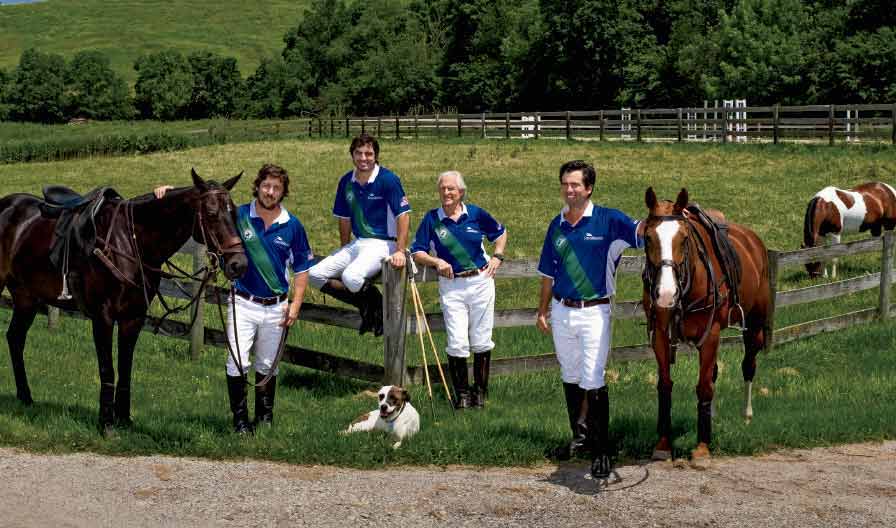 “Oak Brook Polo is the birthplace of polo in the Midwest,” says Drury, who serves as captain of the Oak Brook Polo team with Gutierrez, Obregon, and Horacio Onetto. “Everything that happens throughout this region is the result of polo existing in Chicago.”

What’s even more impressive is the history of the sport itself, which has existed for at least 2,000 years.

Scholars believe polo originated in China or Persia and was originally used for training cavalry. History’s first recorded polo match was played between the Turkomans and the Persians (the Turkomans won), and the game was also played from Constantinople to Japan in the Middle Ages. 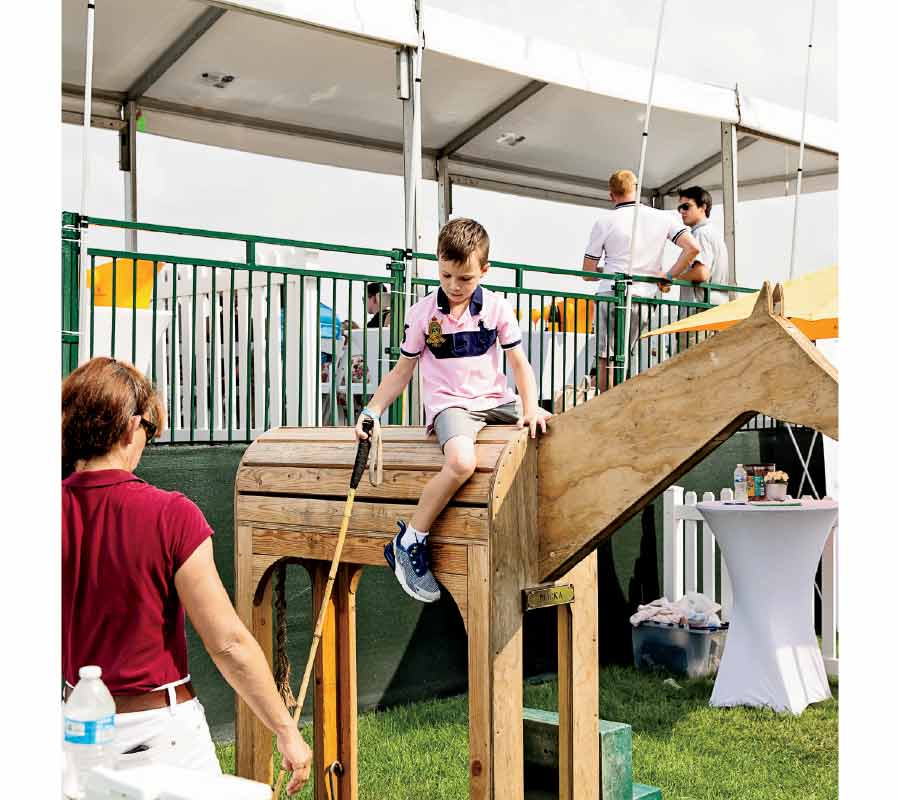 Research provided by Oak Brook Polo Club Managing Director Danny O’Leary shows that the modern age of polo began when the British discovered the game in Manipur on the border of India and Burma, founding the world’s first polo club at Silchar. Many other clubs followed and, today, the Calcutta Club, which was founded in 1862, is the world’s oldest. Today, the oldest clubs outside of India include The Malta Polo Club, the All Ireland Polo Club in Dublin, England’s Monmouthshire Polo Club, and the Meadowbrook Polo Club on Long Island in New York.

From there, the sport headed south to Argentina and around the globe to Australia, making polo the international sport that it is today.

​Gutierrez recalls watching his father go off to play polo in Europe, South America, and Canada when he was growing up in Buenos Aires. Teammates Obregon and Onetto also recall the influence of polo on their childhoods in Argentina.

Obregon’s twin brother currently works at Go Polo in Bolingbrook, a sprawling farm where both he and Gutierrez keep their horses (10 each). He says this is his favorite part of the sport, being around these beautiful creatures. While spectators are savoring the parties with big hats and bottles of champagne, Obregon shyly says he prefers the company of the horses, his “best friends.”

Drury, who joined his team for our photo shoot at Windridge Farm one hot day in June as the players arrived in Oak Brook for the season, says the Go Polo training center is the future of the sport. “This is where it all starts,” he says, adding that the children who were getting lessons that summer day could be tomorrow’s polo stars.

That was the case for Onetto, who says his first years as a player were “in this barn,” adding: “I played my first game as a professional at Oak Brook Polo in 1990.” 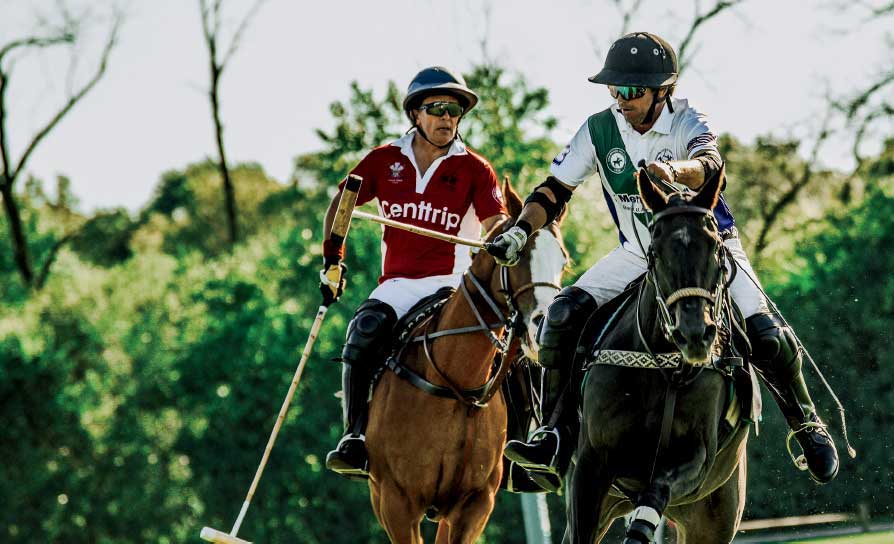 And like his teammates, he could go anywhere in the world, but they all keep coming back to Oak Brook.

“I am not bound to one place. I am a modern gypsy,” says Gutierrez, explaining that he plays in San Diego or Spain during winter months. “But Oak Brook is special. It’s a feeling I get when I come here … it’s a long season and after so many years, it feels like home.”

While the 2019 season is well underway, there are still five big matches coming up—including the Butler Invitational Cup game against Wales on September 8, which is sponsored by our magazine. 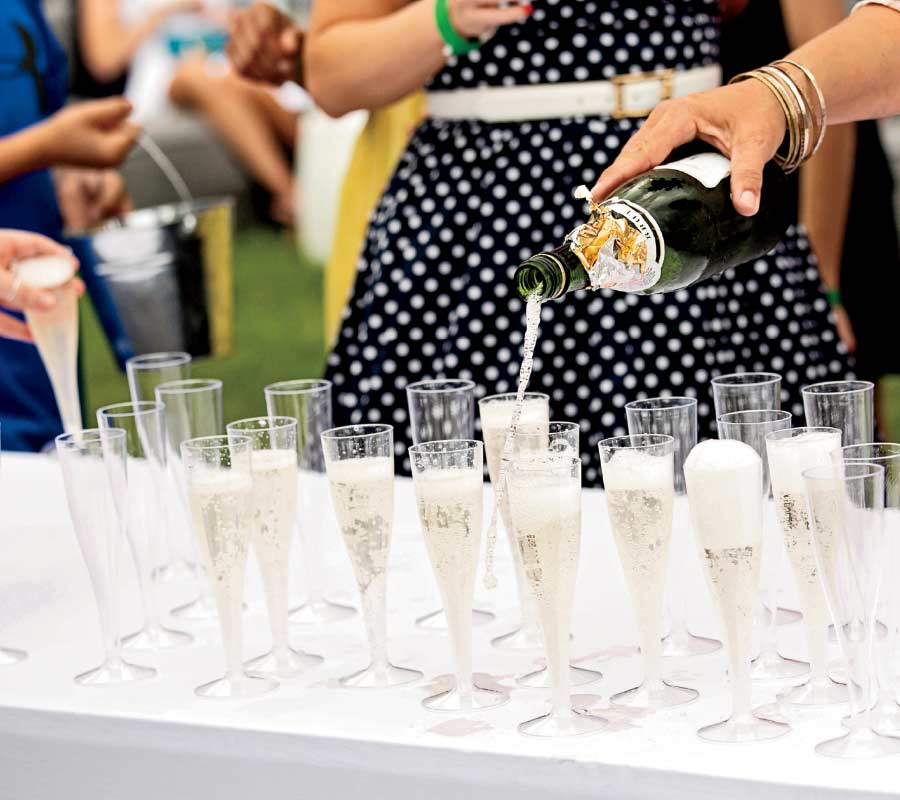 “We’re looking forward to a very exciting season and putting on a show,” adds Drury, who says that at the end of the day, polo is about bringing people together for one of the most amazing parties they’ve ever attended.

Gutierrez has one other goal for 2019 though—”to win every game, of course,” he says with a wink.

For a full schedule and ticket information, visit oakbrookpoloclub.com.

To get the most out of polo, it’s important to understand the ins and outs of the game. Here are some pro tips from Oak Brook Polo Club.

The polo field is 300 yards long by 160 yards wide (the area of nine football fields). The goalposts are 8 yards apart. The boundaries of the field can either be “boarded” with 12-inch boards or marked with white lines.

Two teams of four compete on the field. While each player plays both defense and offense throughout the game, each player’s number indicates his or her actual role or position. Number 1 is a forward player responsible for offense, Number 2 plays offense and supports Number 1 in addition to playing defense, Number 3 tries to take possession of the ball, passes, and hits the ball downfield, and Number 4 defends the goal and returns the ball to teammates.

Like soccer, the objective of polo is to drive the ball (which is made of white plastic and weighs 4.5 ounces with a 3.5-inch diameter) downfield and between the opponent’s goalposts. The game is divided into six seven-minute, 30-second play periods called “chukkers.” The “line of the ball” is the imaginary path the ball travels on, and it represents a right-of-way for the last player striking the ball. (Crossing “the line” is the most frequent foul in the game.) When the ball is hit between the goalposts, a point is scored, and the teams switch ends of the field.

All players are rated on a scale of -2 to 10, with 10 being the best. This rating is based on the player’s ability and has nothing to do with the number of goals scored. There are many factors that determine a player’s handicap, including his or her horsemanship, hitting, quality of horse, team play, game sense, and sportsmanship. The team handicap is the sum of all the players’ handicaps. In handicap matches, the team with the lower handicap is awarded the difference in goals at the beginning of the match.

Both the players and the ponies are outfitted with the tools they need to win the game.

​Bandages: The ponies’ legs are wrapped to prevent contact with the polo ball.

Breeches: The rules state players’ breeches (pants) must be white, and they are double-seated to provide a cushion from rough riding.

Bridle: This headgear is comprised of a collection of straps and supports that allow the player to steer the pony.

Draw Reins: Made of strong yet supple leather, reins provide an effective method for controlling the pony and making fast turns and stops.

Helmet: Covered in linen, the helmet protects the player from oncoming balls that can travel up to 100 miles per hour. Some players wear helmets with metal face guards.

Mallet: Made of bamboo or cane with a hardwood head, polo mallets range in length from 49 to 53 inches to accommodate the player’s swing and the size of the pony. As a rule, the mallet is always held in the player’s right hand.

Riding Gloves: Leather gloves give the player a better grip on the reins and the mallet.

Saddle: The polo saddle is an English saddle with a wide, deep seat and a cantle (rear portion) designed for easy movement.

Brush up on the polo jargon so you’re sure not to miss a second of the action.

Appealing: Players express their desire for a foul by raising their mallets overhead, with or without a helicopter motion. Overzealous appealing is frowned upon.

Backshot: This backhand swing is one of the basic strokes that send the ball in the opposite direction to change the flow of play.

Bowl-In: When the umpire starts or resumes play by rolling the ball down a lineup of the players. (Also known as a throw in.)

Bump: When a player rides into another to disrupt his shot or remove him from play.
Check and Turn: To slow the pony and turn safely.

Hook: When a player catches an opponent’s mallet in swing below the level of the pony’s back to turn or leave the ball for a teammate.

Knock-In: If a team hits the ball across their opponent’s back line, the defending team gets a free shot from the back line.
Line of the Ball: The imaginary path the ball travels on after it is hit.

Near Shot: Shot from the left side of the pony.

Neckshot: Shot made by hitting the ball under the pony’s neck,

Off-Shot: Shot from the right side of the pony.

Penalty: Numbered from one to 10, a penalty awards a free shot to the fouled player from a set distance determined by the severity of the foul.

Pony Goal: When a pony causes the ball to go through the goalposts.

Ride-Off: When two riders make contact and attempt to push each other off the line of the ball to prevent the opponent from striking the ball.

Safety: When a defending player hits the ball across his own back line. Also known as Penalty 6.

Sudden Death: Overtime play where the first team to score a goal wins.

Tack: All the equipment used on the pony.

Tailshot: Shot made by hitting the ball across the pony’s tail.