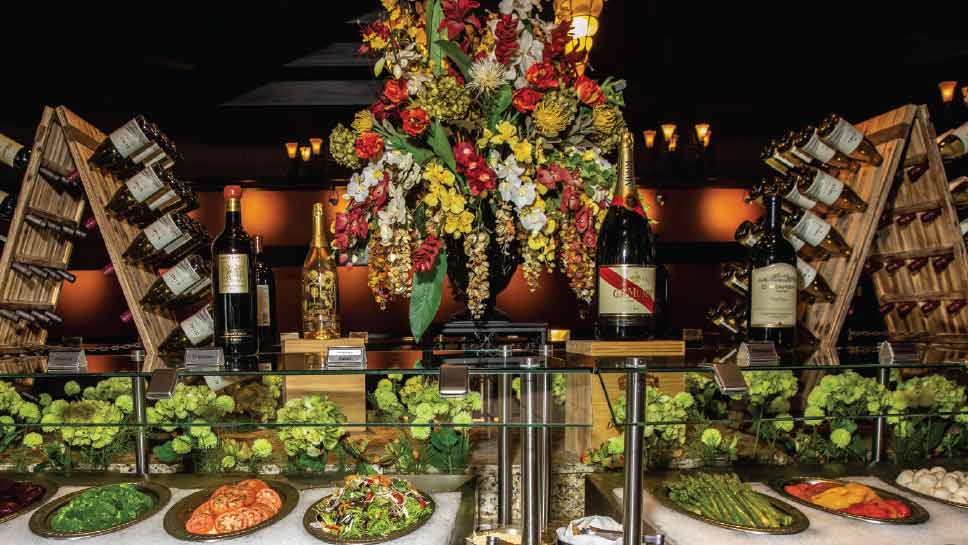 You can still chow down in style—like a true Brazilian cowboy—at Chama Gaucha in Downers Grove. PHOTOGRAPHY BY ROBIN SUBAR

The way we see it, good servers are a lot like great cab drivers. We’ll take someone who’s succinct and honest over a slick chatterbox with a polished delivery any day of the week. Which is why it warmed my carnivore heart to hear one of our servers at Chama Gaucha, the all-you-can-eat Brazilian steakhouse in Downers Grove, slip us the most honest advice I’ve ever heard at a place like this.

“Our cold bar is like a buffet,” he told us, waving his hand like a magician who’s just pulled a garden full of vegetables out of his had. “You can sample whatever—and how ever much—you want. Salads. Salumi. Tabbouleh. But don’t overdo it,” he added with a wink, “because you want to save as much room as possible for the meat.”

I’ve been going to churrascarias —churrasco is the Portuguese word for barbecue— for a little less than two decades and it’s the first time a server has ever told me what all of us already know: You don’t go to a place like Chama Gaucha to graze on salads like an Instagram model before a photo shoot. You come to feast like a cowboy fresh off a six-month cattle drive. 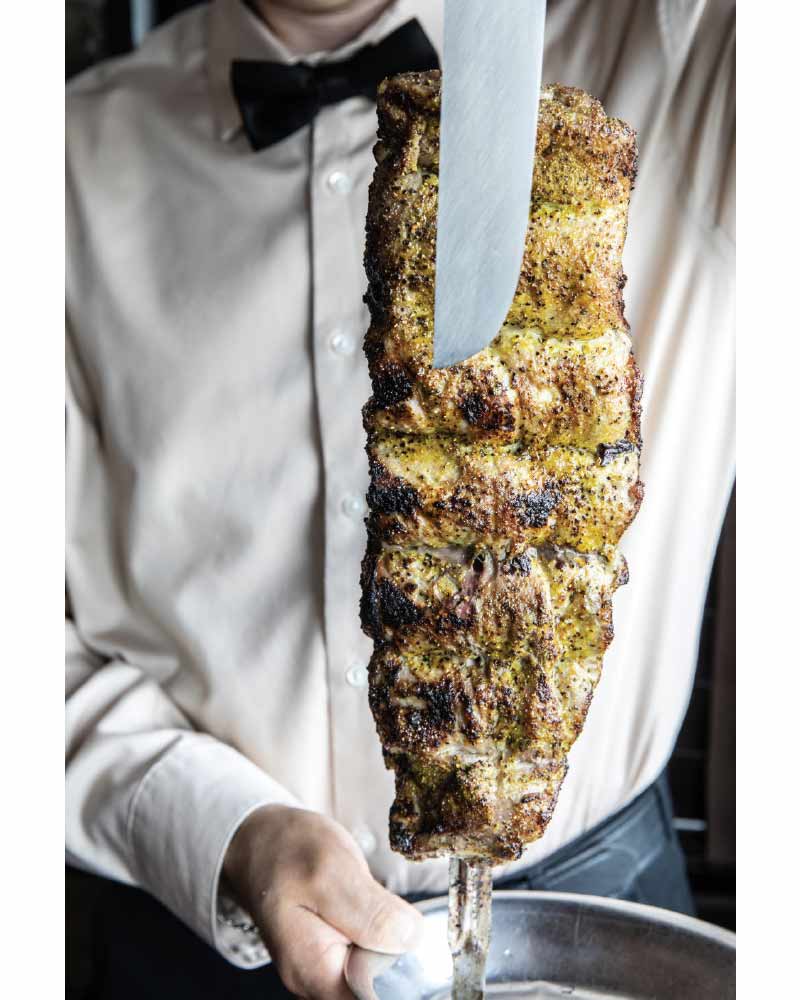 It’s pure role-playing at a churrascaria, the restaurant equivalent of an overnight stay at HBO’s Westworld. You’re expected to leave your inhibitions—especially your diet du jour—at the maitre’d stand and gorge on as much proteins as your oversized belt buckle can muster.

That said, Chauma Gaucha’s cold buffet is worth a twirl. We particularly enjoyed its cold vinegary shiitake mushrooms, the house asparagus, and its potato salads. But mostly we took our servers advice and corralled as much wood-charcoal fired meat as possible. Chauma serves 13 different cuts of chicken, beef, pork. and lamb—each speared on to what look like giant branding irons. 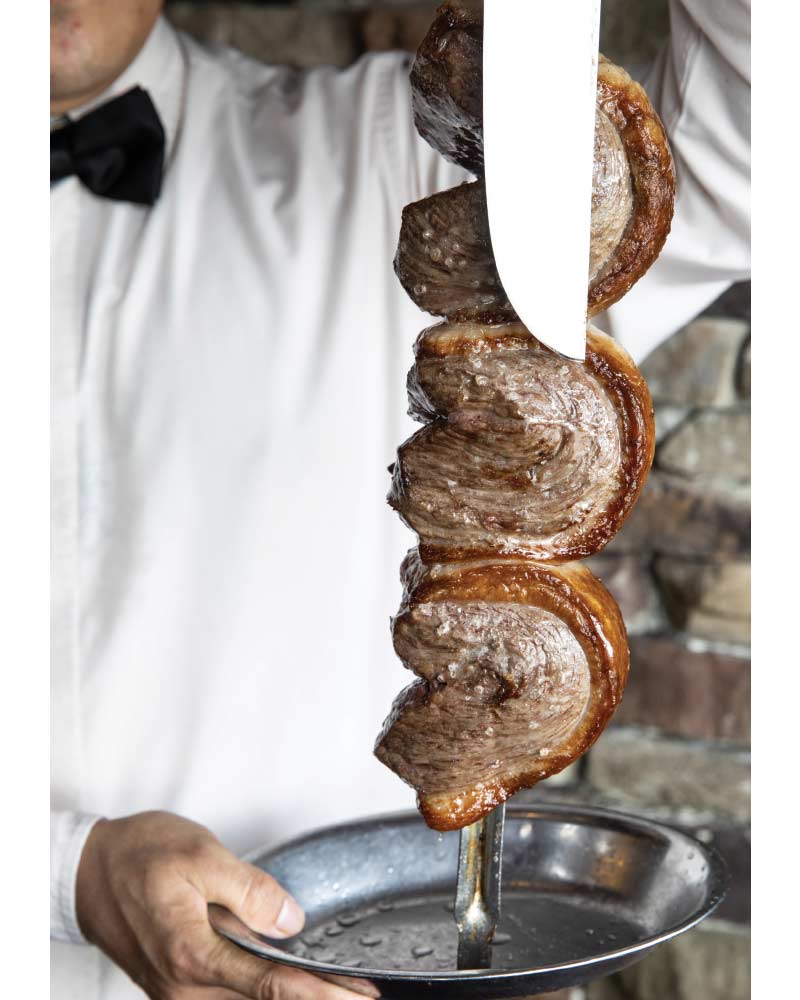 If you’ve been to a churrascaria before, you likely know the drill. Every diner is given a two-sided square-shaped coaster. A flip to the red side signals servers to slow their horses in terms of coming to your table. Go to green and you’re ringing the dinner bell for every server brandishing a skewer to gallop your way.

The pervasive knock on churrascarias is that if you’ve tried one, you’ve tried ’em all, which is not entirely true. We’ve found that every concept has their own specialties, including Chama Gaucha. The first-rate beef cuts—bacon-wrapped filet, bottom sirloin, ribeye, and Brazilian’s signature prime-rib Picanha cut (a flavorful sirloin camp that’s rimmed with a thick layer of fat)—are prepared like they do in the old country: a sprinkle of sea salt and a turn above charcoal-wood fire.

And yet we were surprised at the quality of the sauces—an appropriately piquant chili-flecked chimichurri and a loose but tasty horseradish—that arrive at the beginning of the meal. If anything the house’s polenta fries were some of the best we’ve experienced at a churrascaria, which is a fine Brazilian-style steak frites option.

We’d recommend you keep your card green for anything with a rib attached to it. The pork ribs—coated and crackly instead of wet and sweet—are patted down with an impressive lemon-pepper rub that adds a bit of acidity to what would other wise be a simple steakhouse palate. And the house’s beef ribs were some of the best we’ve had at a churrascaria. It’s the equivalent of grandma’s pot roast on a vertical spit.

When manager Roniori Moreira, a Brazilian ex-pat, told our table that he has regulars who drive in from Indiana and Iowa just to eat at Chama Gaucha, we now know why. In addition to the ribs, the service is top notch. Many of Moreira’s staff are actually from Brazil, which explains why everyone seems so knowledgeable about Brazilian fare as well as its history and culture. Throughout the night, bands of servers went out of their way to ask if we wanted a certain cut of meat, often running into the kitchen or signaling a server to bring the beef as soon as possible.

It’s telling that after so many years in operation, Chama Gaucha still packs them in, especially on the weekends. On our particular visit, crowds started settling in as early at 4:20 p.m., which infused the dining room with an infectious energy to the place. Unlike most churrascaria chains, Chama Gaucha only operates four locations in the United States, which amplifies its appeal.

The other allure? There’s virtually nothing that you see that you can’t order. It’s one of the rare restaurant experiences where you can eat the entire menu in one sitting. Kudos to roving cocktail carts that will pour you top-shelf liquor tableside before and after your meal, which is why so many tables linger far after they’ve had their fill.

Just remember to save some room Brazil’s famous papaya cream dessert, a rich blend of papaya and ice cream, topped if you wish with a shot of crème cassis. Like the place itself, it’s not the sort of thing that’s easy to say no to, regardless of how many pants sizes you’ve grown along the way.

Chama Gaucha is located at 3008 Finley Road in Downers Grove. Call 630-324-6002 or visitchamagaucha.com/chicago