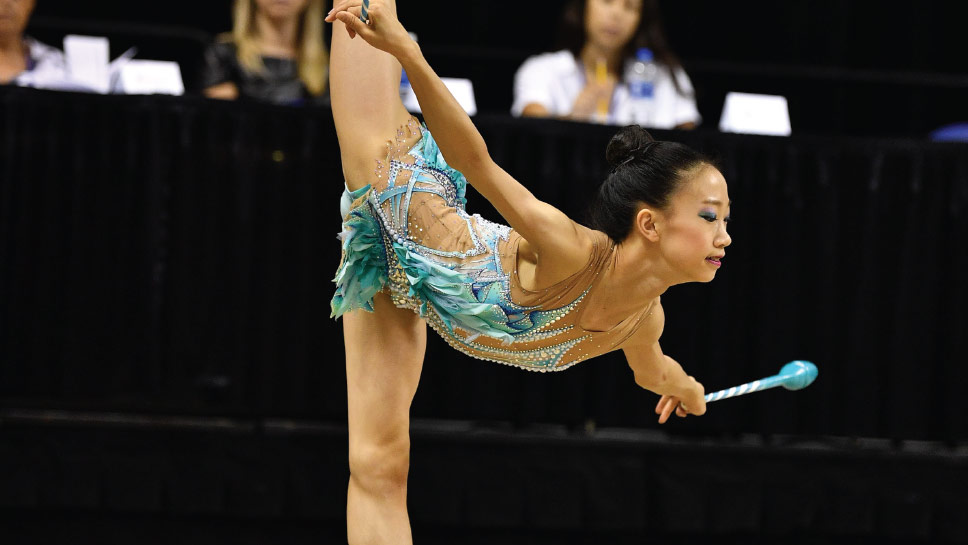 Hinsdale’s Jenna Zhao shares the secret of what has motivated her Olympic-level gymnastics success.

Over the past four years, Jenna Zhao has become an accomplished and more confident rhythmic gymnast. And if the graduating eighth-grader from Hinsdale Middle School ever begins to waver, she turns to a special page in her notebook.

“It helps me remember what I’ve achieved, what I’ve learned from that, and how much I’ve improved so I can be motivated,” Zhao says. “I made this page for when I’m doubting myself, which everyone experiences. The important part is if you can overcome that and refocus yourself.”

Zhao’s latest milestone is being a member of the eight-athlete U.S. Junior National team after finishing fourth in all-around at the 2018 USA Gymnastics Junior Olympic National Championships. She missed by two places the previous season.

“I was surprised and shocked and really proud of myself,” Zhao says. “Thinking back, I never thought I’d make it this far.” All of that changed after switching gyms to the Vitrychenko Academy in Niles, training with 1996 Olympic bronze medalist Olena Vitrychenko as her coach.

The next year, Zhao won her Level 7 division at the 2015 USA Gymnastics Junior Olympics, followed by a Level 8 title in 2016. These past two seasons, Zhao has competed at Level 10—the highest competitive level.

At this year’s nationals July 2 to 6 in Des Moines, Iowa, she’s going after only four spots for the U.S. Junior World Team. Next season, she will try making the Senior National team.

“It was not until the 2015 nationals that I realized how much Olena helped me improve. That’s when I realized that my expectations were too low for myself,” Zhao says.

“Even though the training can be really tough sometimes, there’s always something to enjoy,” Zhao says. “I feel it really helps me express myself.”

Zhao may have little free time between school work with rhythmic gymnastics, but she recently did a school project about how the sport positively has shaped her. Not only is she more motivated, goal-oriented, and living a healthier lifestyle but she’s also learning to manage stress and become more confident.

If there is a down side, it could be that sometimes vacations are delayed or postponed. But that’s OK with her. Even before Level 10, Zhao recalled how sore she was training after a two-week vacation in Kenya. She joked that her past winter break was two weeks off from school but also additional training earlier in the day.

“That’s a really important part of being an athlete, being able to balance school and gymnastics but also admitting that you need to sacrifice a lot,” Zhao says. “I would say you value the time you have. Whenever I have a day or weekend off, I would just be like, ‘OK, I’m hanging out with my friends.’ I don’t get as much time as other students, but I definitely experience a lot in replacement of that.”

This past season alone, she has traveled to Poland, Portugal, Hungary, Bulgaria, Latvia, and Holland. She recently was awestruck visiting a tulip garden in Amsterdam.

“It was just fields of flowers, and so many different colors. It was just really beautiful,” Zhao says.

Expression fuels Zhao. She has played the violin since fourth grade but may not join Hinsdale Central High School’s orchestra because of her gymnastics schedule and other electives. However, her favorite school subjects are art and music. “Gymnastics is how you move and how you show how you feel. Art is just like using tools to make something that delivers a message,” Zhao explains.

Clubs has become her favorite apparatus for that reason. Her accompanying music is Marilyn Monroe singing “Diamonds Are a Girl’s Best Friend” from the 1953 motion picture Gentlemen Prefer Blondes. “I haven’t watched the movie, but I have kind of my own story going on as I listen to the music,” Zhao says.

As Zhao’s sport psychologist often tells her, it’s all a process. At meets, she isn’t concerned with scores; only the next performance element by element. She says there’s nothing like completing the final routine at the final meet and feeling the satisfaction of a season well done.

“I like to visualize my routines the night before,” Zhao says. “I make goals for every season. I don’t have a far-reaching goal. I have dreams. I’ve had dreams of going to the Olympics. I am here and I want to go over there. I have multiple steps to achieve in between.”