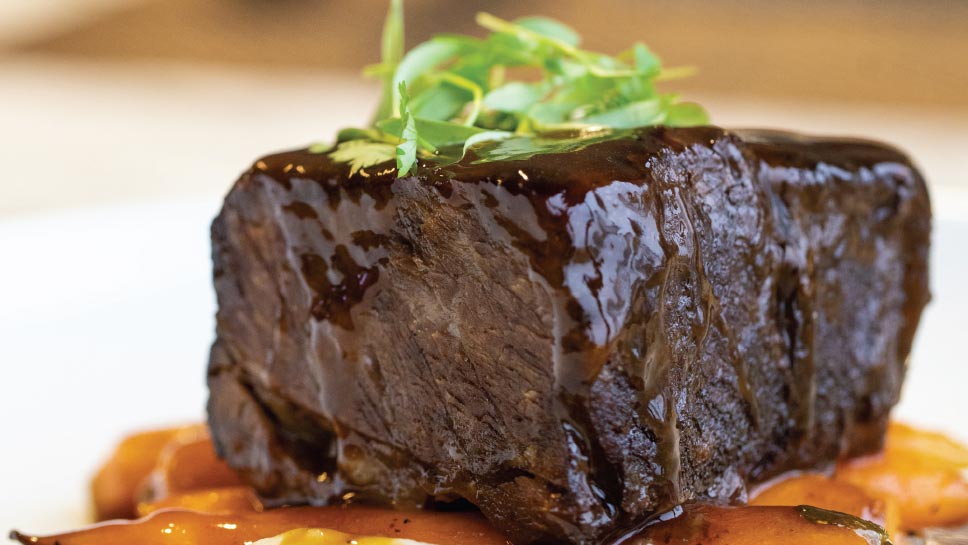 B. Restaurant in the Hilton Oak Book Hills is set to impress. PHOTOGRAPHY BY ROBIN SUBAR

As a general rule, one should be leery about any restaurant that boasts views stunning enough to be used as a screensaver. Experience dictates that there’s often an inverse relationship between the quality of a dining room’s menu and the charms that can be glimpsed from its picture windows.

Show me a restaurant—city or suburbs—that stares into the maw of a perpetual traffic jam, lonely curbs, or a parking garage and I’ll show you a place that’s going to keep your attention squarely on the plates in front of you. By contrast, any spot that can slip panoramas of its environs into its Instagram feed has so thoroughly seduced your eyes that it’s prone to take your taste buds for granted.

And yet there are exceptions, aren’t there? Like the underappreciated B. Restaurant in the Hilton Oak Brook Hills Resort & Conference Center. The hotel has just undergone a $30 million renovation and looks like it’s more than ready an elegant second act. And yet for all its visual charms, Chef Victor Martinez’s menu has not only holds its own against the dining room’s shimmering golf-course views but seems to have channeled some of its beauty. 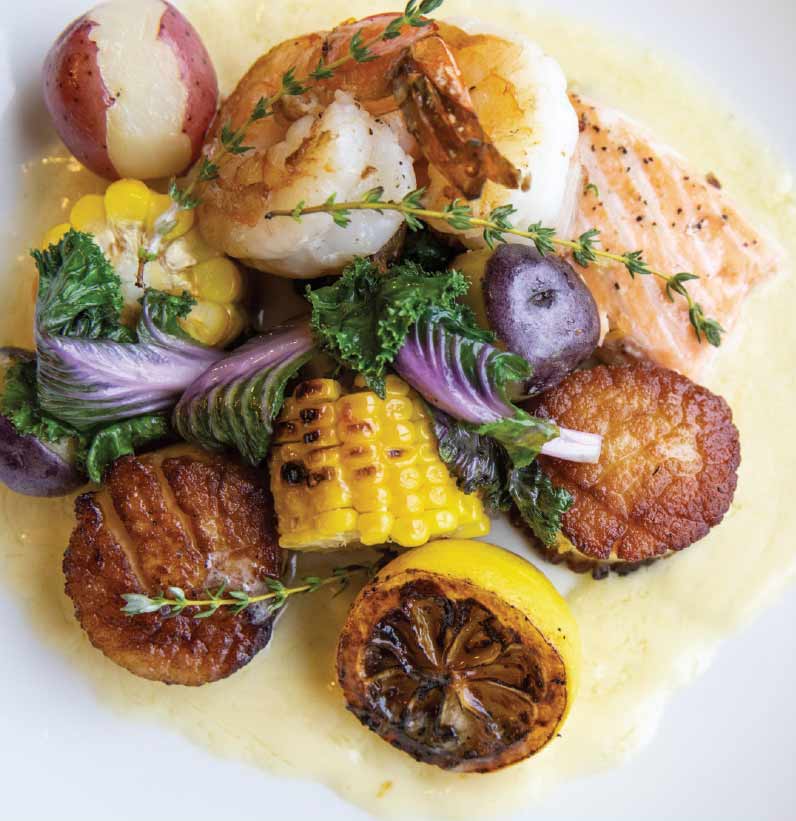 Martinez, a longtime hotel chef who enjoyed a previous stint at Hilton Oak Book earlier in his career, says that he draws inspiration from strolling the grounds and staring out his dining room windows. Which is why you’ll find that his avocado toast has been contoured to look like the rolling hills and greens of the resort’s golf course. Little sprigs of microgreens pop up from the avocado-smeared toast like bits of fringe that have blown onto the fairway. It’s colorful and delicious, aided by thin ribbons of pink watermelon radishes and a sprinkling of finely diced pickled zucchini. The results taste like a Midwestern salsa: acidic, earthy and creamy all in one bite. It’s a garden in butter form.

We were also impressed by Martinez’s rich lamb meatballs, which are stuffed with slivers of bacon, whose smokiness is rich enough to match the slices of Manchego blanketing each meatball.

Martinez, who will oversee the installation of a new vegetable garden on the hotel’s grounds later this year, seems so smitten by the notion of having his own on-ground Garden of Eden that he’s been experimenting with a number of brightly colored salads, two of which that pair peppery bits of frisee against unexpectedly sweet elements. The house’s mango salad, in a tip of his toque to the French custom of ending a meal with a light salad, surrounds palate-cleansing frilly greens with sweet planks of organic carrots and a mango salsa that screams summer. Even more impressive was Martinez’s crab salad, which winds and tendrils its way through of a tiny green forest of asparagus stalks and slices of sweet potatoes curled into the shape of terra chips. 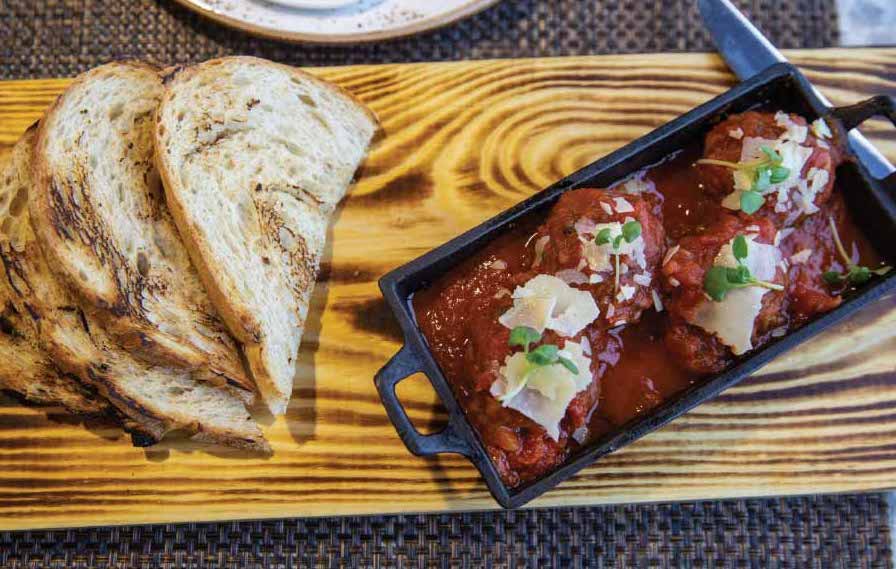 You’ll be surprised, for instance, how rich and satisfying the kitchen’s boneless beef ribs are, the sort of dish that signals Martinez’s French culinary training by amplifying an already meaty cut of beef into something as wine-rich as a good bowl of beef bourguignon.

Although Martinez is constantly changing preps, make sure to save room for his scallops, a personal favorite, that were perfectly caramelized and set atop tiny corn-peach salsa beneath a sauce that’s tastes like a pureed succotash.

There are lighter dishes as well, including an airy take on an East Coast seafood boil. Think poached salmon, shrimp, and scallops along with slices of corn and potatoes—as brothy as a classic pot au feu—that allows dinners to dip each piece of seafood into a beurre blanc, which tastes drawn butter squared.

I must admit, come time for dessert with sunset banking westward over the shoulder of the hotel, that we couldn’t resist the house’s pitch perfect s’mores—layer-cake-like squares of flamed marshmallow and chocolate squares atop a graham cake base—and felt as if we’d discovered a hidden local gem that gleamed and glistened like so few local hotel restaurants do these days.