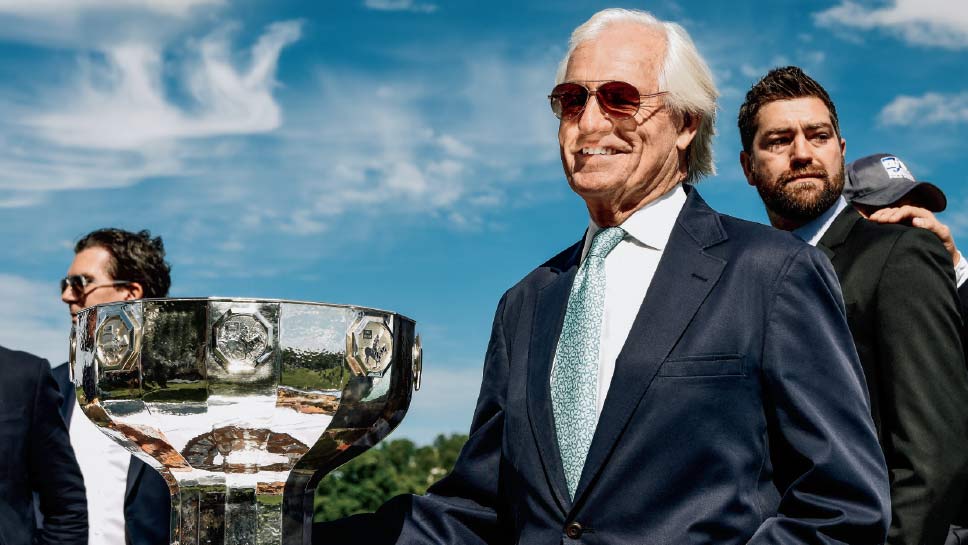 Born on the South Side of Chicago, Jim Drury was not raised into polo royalty. But once he discovered the sport more than three decades ago, he was hooked. Today, not only does he provide a home for “retired” polo ponies on his Barrington Hills estate but in 2015, he took on the herculean task of overhauling and saving the Oak Brook Polo Club. As one of the 2019 sponsors of Oak Brook Polo, we were delighted to visit the Drury farm and hear his story. PHOTOGRAPHY BY FRANK ISHMAN

Jim Drury greets his retired polo pony Grayson with unbridled affection. He speaks in a voice one uses to coo over a grandchild or favored pet—stroking Grayson’s muzzle and mane, giving him warm kisses. Drury’s love of horses and the sport of polo is obvious, as is the devotion he demonstrates for Peggy, his wife of 35 years. Words are not necessary to see that the life the two have created on their bucolic Pinecroft Farm in Barrington Hills is a slice of heaven.

But Drury is not short on words during a recent interview and photo shoot one sky blue day in late March, an afternoon shimmering with sunshine and only the slightest nip in the air. Grayson is one of eight polo ponies Drury has retired to live out their remaining years in comfort and companionship at Pinecroft Farm. This loving care is symbolic of Drury’s passion for the sport he’s been playing and promoting for more than three decades. 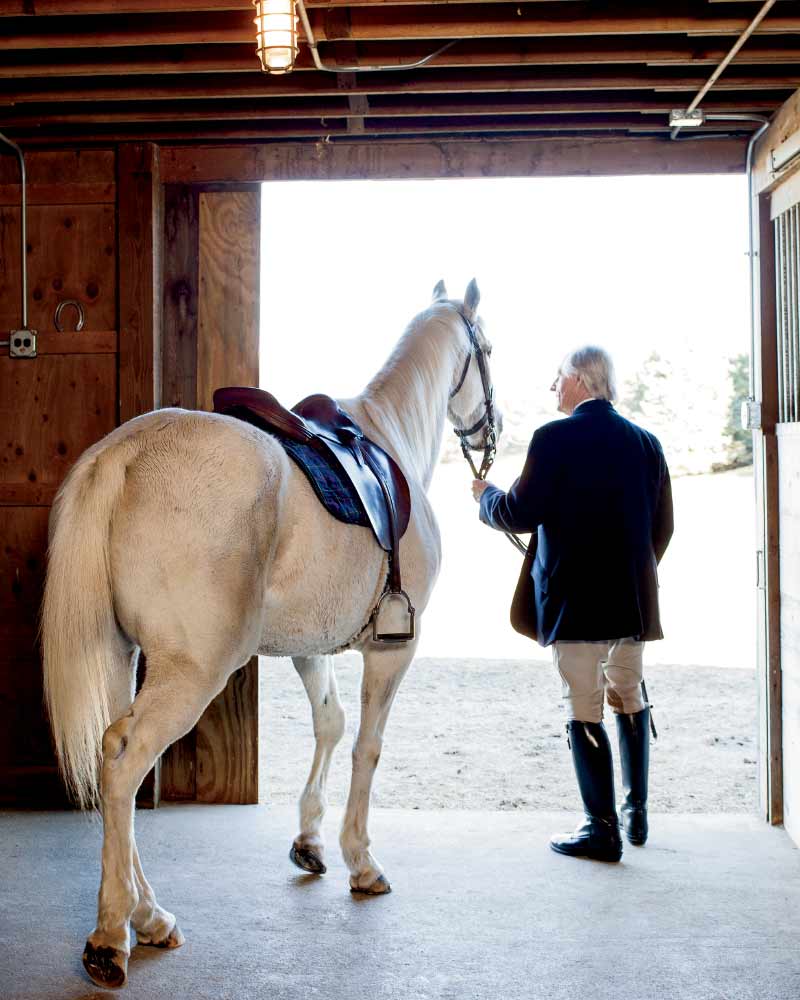 In 2016, Drury took his commitment to polo to another level by stepping in to save Oak Brook Polo Club in Oak Brook. Established in 1922, the iconic club was on the verge of extinction by 2015—nearly relegating the once world-renowned polo destination of the late 20th century to the history books. Hailed as some of the greatest polo grounds in the world, Oak Brook Polo Club hosted polo’s U.S. Open for more than two decades and held exhibitions with international royalty and movie stars. Prince Charles, the Prince of Wales, famously played for the UK team in a match against the United States in 1986, winning that year’s Prince of Wales Cup. Other royalty, dignitaries, and celebrities—including Lord Patrick Beresford, King Hussein, The Maharaja and Maharani of Jaipur, Audrey Hepburn, and Vivien Leigh—visited the club.

From 1954 to 1979, The Oak Brook Polo Club was the largest polo operation in the world, billed the “Polo Capital of the United States” and “Polo Town.” But it floundered and was nearly buried after the 2008 recession with losses, debt, and fledgling attempts to revive it. Until Jim Drury rode in to save the day.

Born on the South Side of Chicago, Jim Drury was not raised into polo royalty. Son of a father who worked in the transportation industry, Drury’s family moved around the country many times during his youth.

“It was traumatic for me as a boy, but also a great education to me in adapting to new environments, communicating with people, and making friends,” says Drury, who went on to become a highly successful businessman, eventually establishing his own business, JamesDruryPartners, in 2001. 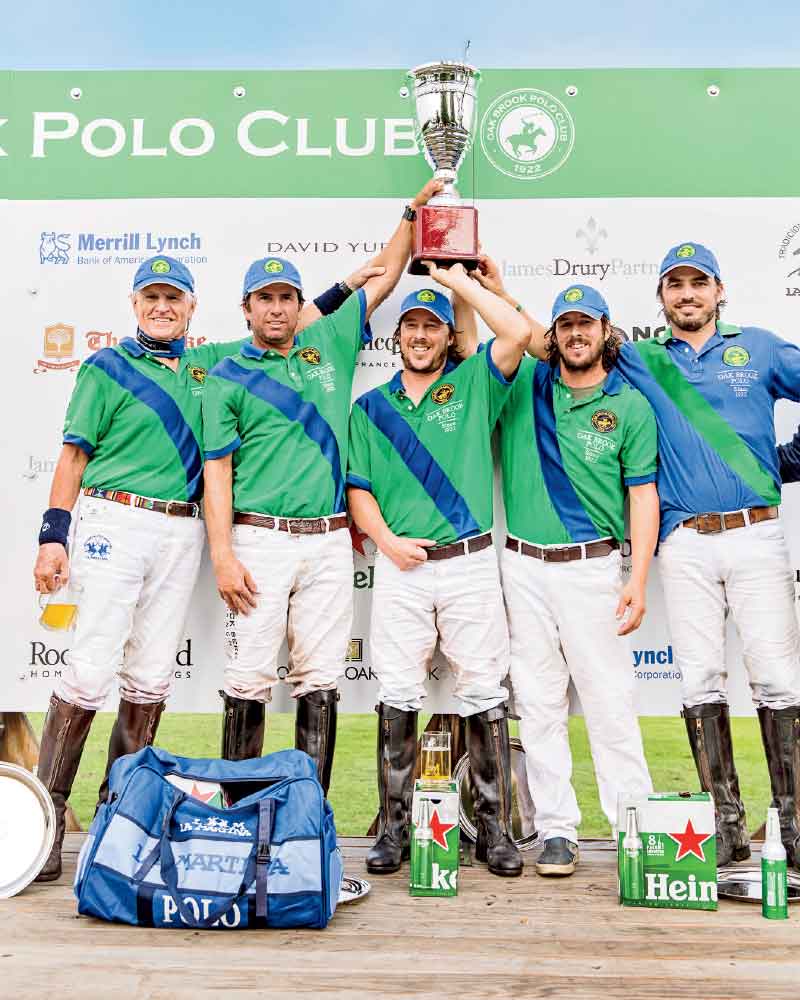 Describing himself as a bit of a class clown—but always serious about school and a natural athlete involved in numerous team sports—Drury studied aeronautical engineering at Notre Dame, working two jobs (including loading trucks at night) during summers to pay for tuition. He later earned his MBA in marketing and finance at the University of Chicago.

After graduate school, Drury was career and family-focused, spending ten years in management consulting, then moving into the executive search industry and rising to the level of Vice Chairman of Spencer Stuart.

One of his leisure activities was horseback riding, and he characteristically wanted to excel at that too. So he took riding and jumping lessons, and eventually learned to play polo. He was hooked.

“I practiced a lot, played with teams, and took to it naturally,” says Drury, who played baseball in college. “I developed fairly well, broke 16 ribs playing polo, and learned not to attempt heroic plays, to be one with the horse, and to be a part of the team.” 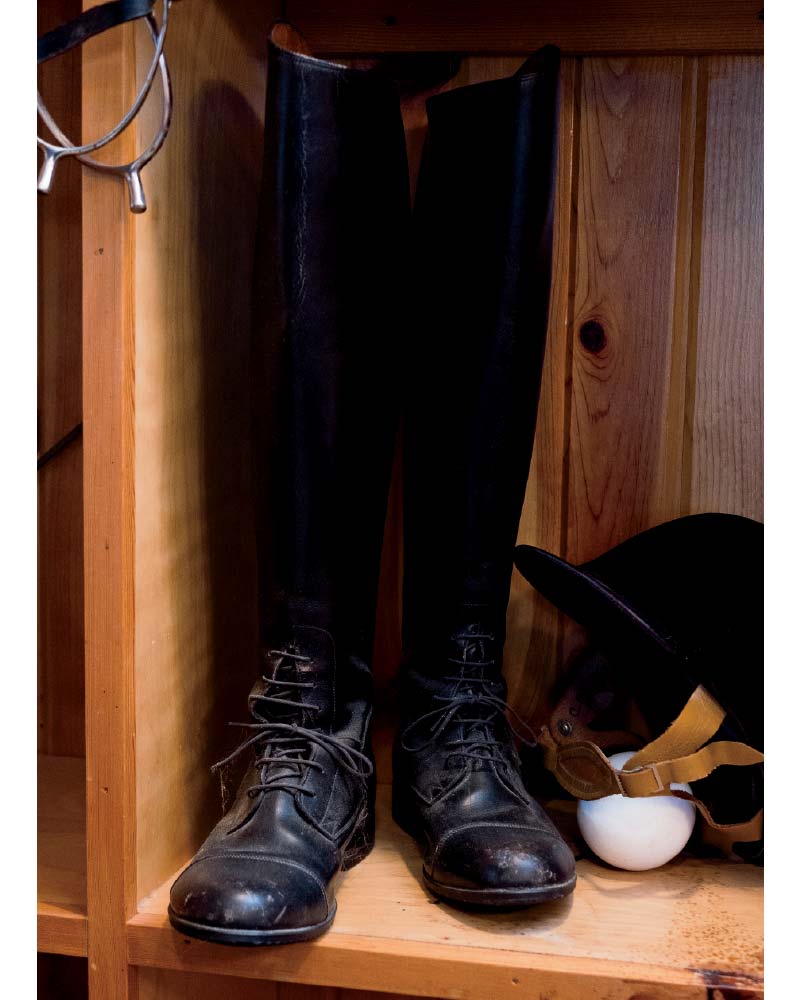 Over time, Drury would go on to put his own Pinecroft teams together, first 2-goal, then 4-goal, and eventually 12- and 16-goal teams, playing often at Oak Brook. He bought his first two polo ponies 33 years ago before moving out to our community.

“We were living in Naperville and I had accumulated about six polo ponies by then,” he recalls. “I needed to find a place to accommodate the horses and we heard about a place called Barrington Hills.” He and Peggy, along with son James (who lives in Hinsdale with his wife, Shanda, and two young sons) made a home—a retreat really—for themselves on Pinecroft Farm.

The Drurys clearly love their estate, which includes wife Peggy’s Art House, where she paints and creates and is highly regarded as an artist in her own right. And of course, there are the polo ponies to visit and care for. Drury also took up fox hunting a few years ago and keeps one horse, Hawk, for when he joins hunts each Fall in Elizabeth, Illinois, where he is a member of the Massbach Hounds Hunt Club. 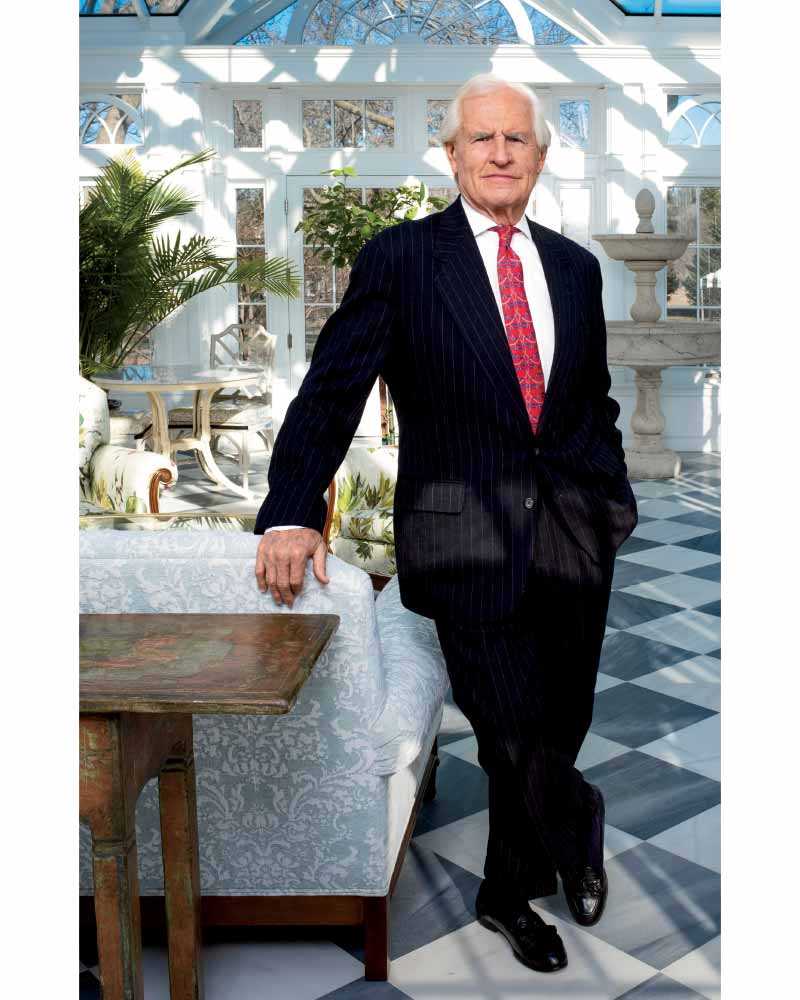 The Drurys recently renovated the original stone house they bought, adding a glorious sun-drenched conservatory, high-end cook’s kitchen, and expanding Drury’s elegant wood-paneled home study. It’s clear that he is ever expanding his own ambitions and horizons, too, using his business success and savvy to create a life well lived.

When Drury decided to take on the herculean task of overhauling and saving the Oak Brook Polo Club, he knew the only way to succeed was to approach it like a business. For one, he invested enough money to keep the club alive while he organized a plan.

“I realized polo in Oak Brook was going to die, and that we needed to run it like a business with a strategic plan and an operating plan,” explains Drury. “We needed to enhance the pleasure and enjoyment of the guests so that they could share the experience and have a great time—and bring their friends and families.” 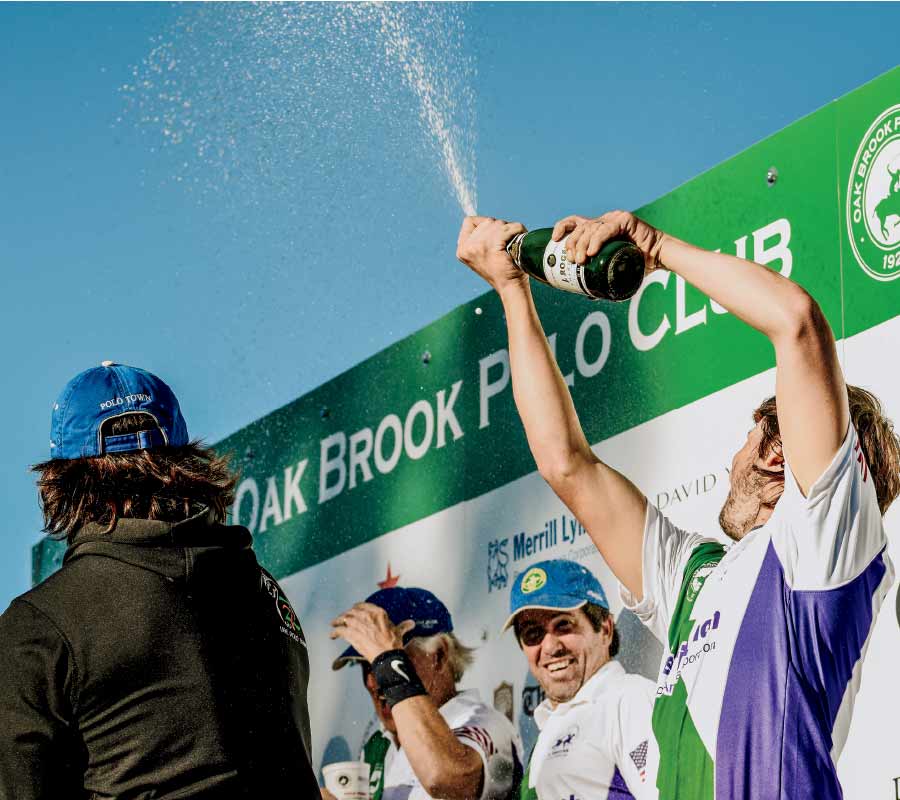 One strategic decision Drury made was to hire Danny O’Leary, former marketing chief of the United States Polo Association as managing director of the “new” Oak Brook Polo Club, now under the auspices of PineOak Partners, which Drury established as the operating arm.

“After working with the U.S. Polo Association, I fell in love with the sport and its people,” O’Leary says. “This is a sport screaming for attention and deserves every bit of it. I could have gone back to mainstream sports, but chose to join Jim and take on the immense challenge of rebuilding Oak Brook Polo.”

Since taking over the club in 2016, Drury has organized a new Oak Brook polo team and continues to serve as its captain playing the #4 position. It seems that polo, for both Drury and Oak Brook, has come full circle.

After all, polo’s storied roots and history run deep in Oak Brook. Nearly a century ago, Frank Osgood Butler and Paul planted the first polo field in 1921 transplanting polo from Hot Springs, South Dakota, and establishing the Oak Brook Polo Club. Paul Butler later initiated and hosted international polo matches that drew legendary players from around the world to play on its premier fields. The global popularity of Oak Brook as a polo center provided the impetus for the Butler family’s development of Oak Brook as a Village.

Now on the cusp of its fourth season under Drury’s guardianship, the 2019 season is poised to see Oak Brook Polo Club return to its glory days of hosting the sport of kings—with safe field conditions, quality and higher-goal competition, and international player and team participation.

“After three seasons together, we have hit multiple milestones,” O’Leary adds. “Polo throughout Chicagoland is in a better place and moving in the right direction because of Jim’s leadership and contribution to the game.” 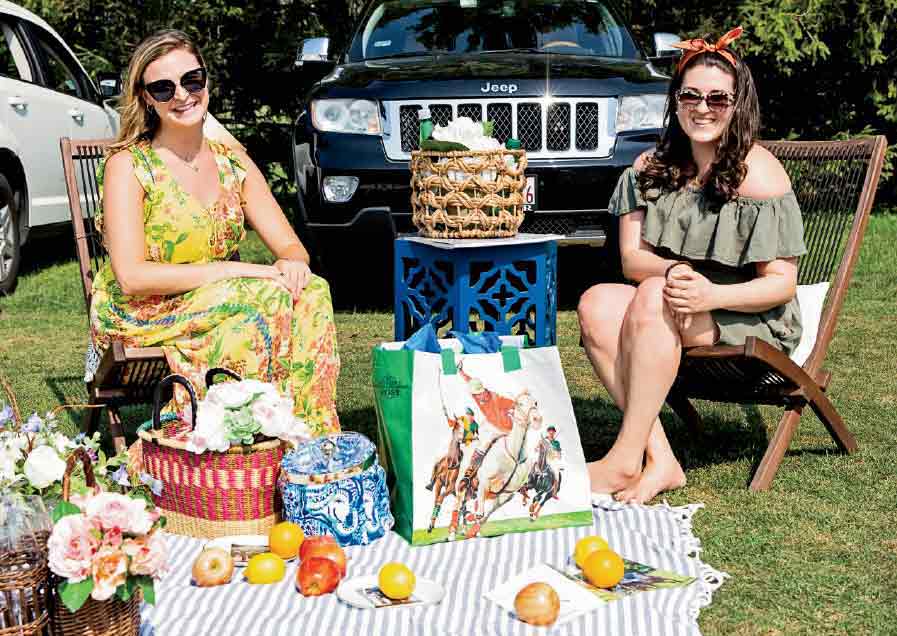 “My ambition is just to see the Oak Brook Polo Club restored the glory it once had,” says Drury, as he walks from visiting his polo ponies in the barn to the main house for an evening cocktail with Peggy. When asked if he’ll ever retire, he replies with a smile, “When I stop having fun.”

All matches are held on Sundays. For more information and to purchase tickets, visit oakbrookpoloclub.com.