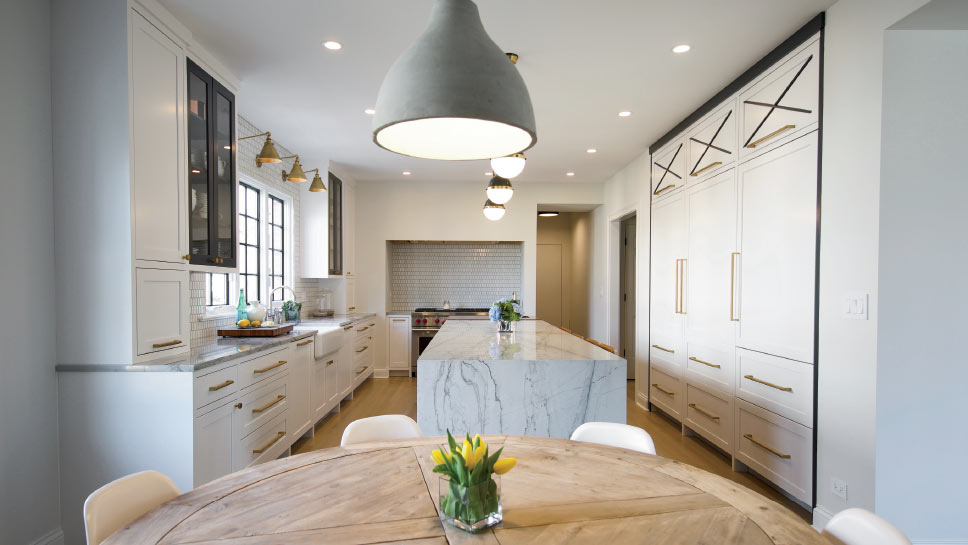 With the 14th annual Hinsdale Cooks! kitchen walk coming up next month, we went behind the scenes at one of the seven homes that will be featured on the popular tour—a historic Colonial Revival property that dates from the early days of the village. The 1923 home was recently renovated with its storied legacy in mind. PHOTOGRAPHY BY IAN MCLEOD

When Hinsdale shoemaker Emanuel Karlson built his house at 220 North Lincoln Street in 1923, it was an upgrade from the family’s more modest home on South Lincoln Street. The Colonial Revival home in the village’s historic district had several large trees in the front and enough space inside for wife Tillie, their three daughters, two sons, and his mother-in-law to spread out and enjoy life in this burgeoning village.

Karlson, a Swedish immigrant, opened his first shoe store on West First Street in 1895, moving the business to South Washington Street three years later. According to records at Hinsdale Historical Society, he could speak English, Swedish, German, and Italian. His family, including his late son Sig Karlson, stayed active in the community for many decades.

That story very aptly sets the tone for Hinsdale Historical Society Women’s Board’s popular spring fundraiser—a Mother’s Day weekend kitchen tour through some of the finest homes in Hinsdale, including the one Karlson built.

The Hinsdale Cooks! event on Friday, May 10 offers first floor tours of some of the area’s most fabulous kitchens. Drawing more than 900 attendees from throughout Chicago, it raises important funds for the Hinsdale Historical Society and its ongoing endeavors to preserve our local history. 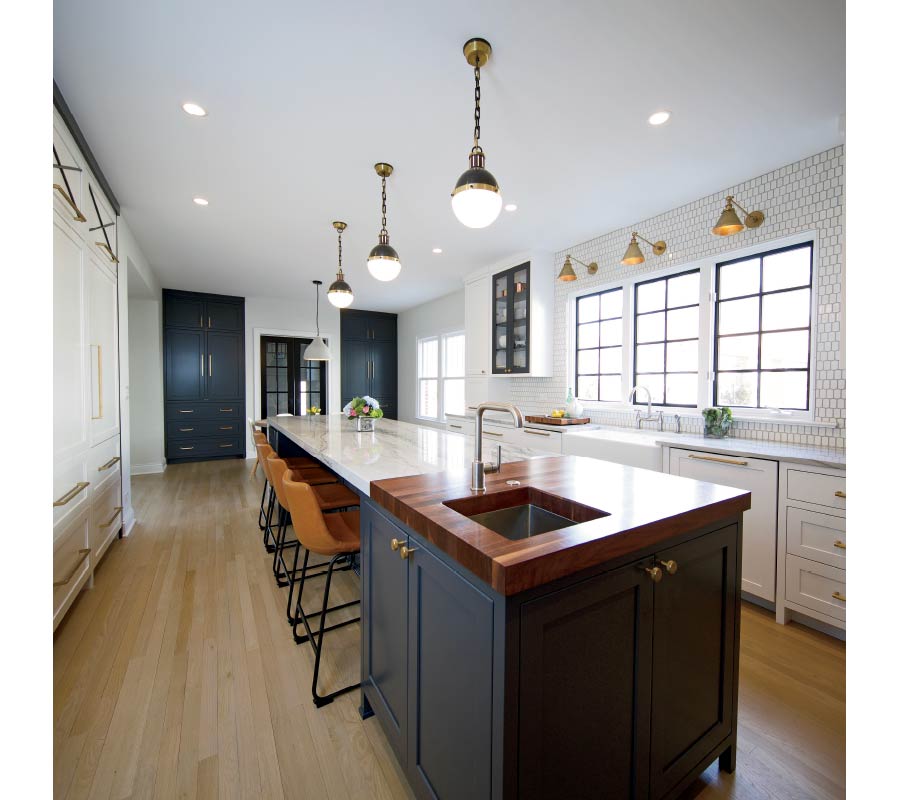 Megan Hickman and her husband Mark Hickman were hired to renovate the 1923 home last year. After more than two decades building and renovating homes in Hinsdale, she says they knew they needed to brace themselves for unexpected obstacles.

“Sometimes you will open walls and find things you weren’t expecting, and with an older home, this can for sure be the case,” says Megan, who operates her eponymous interior design firm in Hinsdale. “But with this property, we really didn’t run into many challenges. Since this is not our first historical renovation, we sort of know the ropes. We left the overall structure of the home intact, so it wasn’t like we were removing exterior walls and opening to risks of having a home fall down.”

Homeowners J and Kristin Maggio knew when they bought the home last May that they wanted to adapt the old house to better suit their modern family lifestyle.

“When the Maggios first moved in, the kitchen seemed too small for an island,” explains Mark, a general contractor with Mark Hickman Homes. “J had a vision that included a massive island running the entire length of the kitchen. We decided we would move a hallway and change a few walls to obtain a new center point in the kitchen. This allowed for his wish of a massive island and a refrigeration/freezer wall. Just by moving a few walls, it made for the biggest difference in the space.” 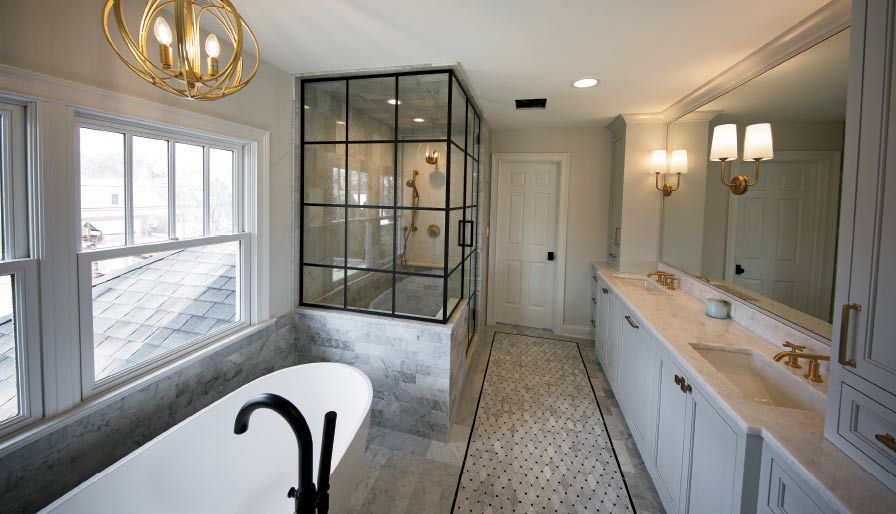 Kristin Maggio says a large kitchen was important for their family of six and that she and her husband were thrilled with how well the project turned out.

“It has all the bells and whistles of new homes on the market today,” she adds. “We’ve redone pretty much everything cosmetically throughout the home using finishes that are both modern and transitional and for the most part, didn’t change the layout of the home.”

Megan says one challenge to the project was blending the historic architecture with the newer design and amenities that the Maggio family was accustomed to.

“Kristin and J were coming from a newer built home with an open floor plan, high ceilings, all those things people crave in a new home,” she adds. “We wanted to bridge those newer accommodations with this historical home.”

The family lived at the home throughout the renovation, which meant projects needed to be tackled room by room.

“There is a full kitchen in the basement, so we started there and gave them a working kitchen, then tackled the main kitchen,” Megan continues. “Beyond that, we have sanded and re-stained all the hardwood floors through the entire home. We have renovated six bathrooms, two kitchens, added a dry bar, painted every room, converted a bedroom to a second-floor laundry room, and built two new fireplace surrounds.”

It was a lot of work but Megan says the couple’s hip, edgy taste made it fun. “Kristin and J were willing to push the envelope a little when it came to design decisions,” she adds. “Their daughter’s bathroom and the powder room were my two favorite areas. They both turned out so great.” 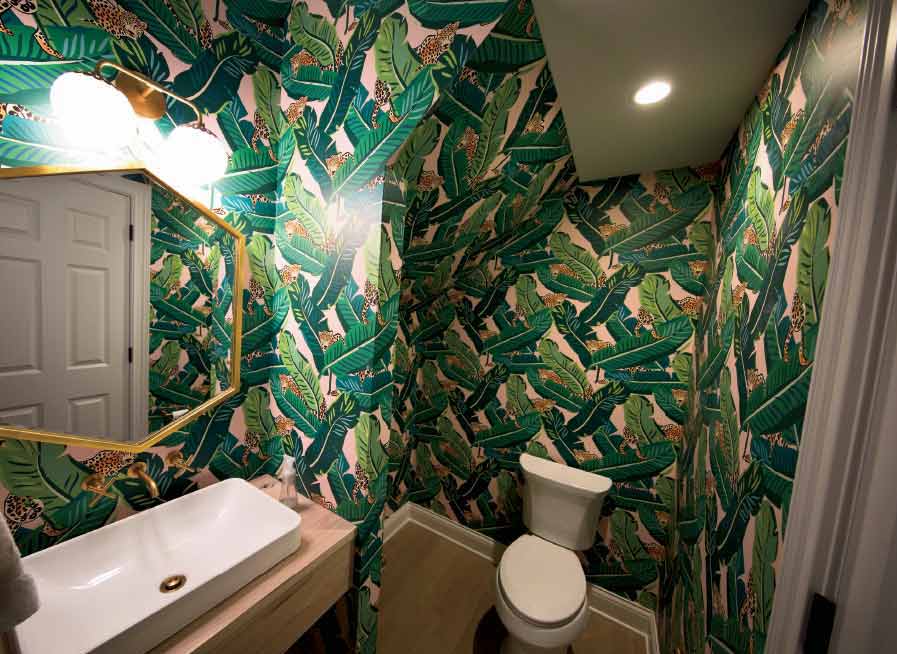 Kristin says the home is the perfect place for her family to grow and settle into the community—much like the Karlsons did nearly a century ago.

“It has many rooms, which allows everyone to have their own space,” she explains. “We love the size of the lot and its Home Alone look as a classic red brick Georgian.”

Tour-goers next month are likely to agree.

Hinsdale Cooks! is the primary fundraiser for the Hinsdale Historical Society and has grown in popularity over the years. Tickets are $50 in advance or $60 on the day. For $100, you can take a trolley from home to home and enjoy a VIP pre-party with cocktails and small bites.

To purchase tickets or for more information about the event, visit kitchen-walk.com.