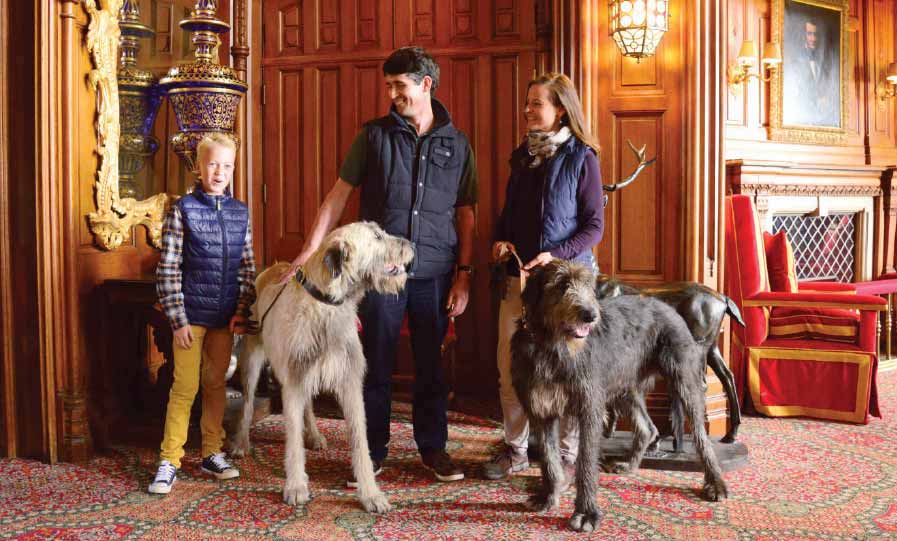 The Irish Wolfhounds at Ashford Castle.

Ireland has changed tremendously in the nearly 30 years since I took my first intrepid voyage there—a fearless college student visiting a new Dublin friend on a tight budget. She lived near Phoenix Park and we spent many a night buying discount pints for a punt and closing local discotheques, eating whatever “tea leftovers” her Mam kept warm for us in the oven when we got home. Subsequent visits through the years were more of the quirky (and still very popular) B&B travel variety, the kind that involve rambling through the glorious green countryside in a rental car, making friends with wayward sheep that wander into the road, and singing along at the pub until they pulled the blinds all the way down (with more singing into the night). 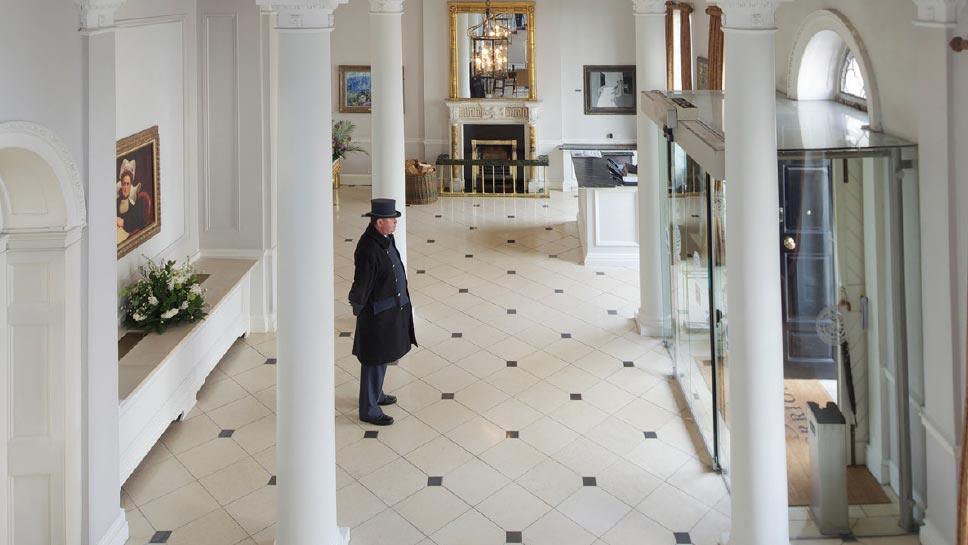 Many of us toddled around Dublintown as youth, but Ireland as a country has come a long way. We exchange pint glasses for champagne flutes to experience two of the Emerald Isle’s most elite properties. From a luxury enclave on Dublin’s elite Merrion Square to a magical stay at the Ashford Castle in County Mayo, this is one for the memory books.

I visited before the “Celtic Tiger” years, and just after, which meant that much of my Ireland memories were filtered through the innocence of youth, the music of U2, and the literature of Roddy Doyle. Last fall, I was determined to revisit the country I love through new, more worldly eyes. I had matured and so had the Emerald Isle, evolving through the first part of the 21st century to become a high-tech hub for such companies as Google and Adobe. The dirty old town of Dublin is still hipster cool but it’s also suddenly posh. 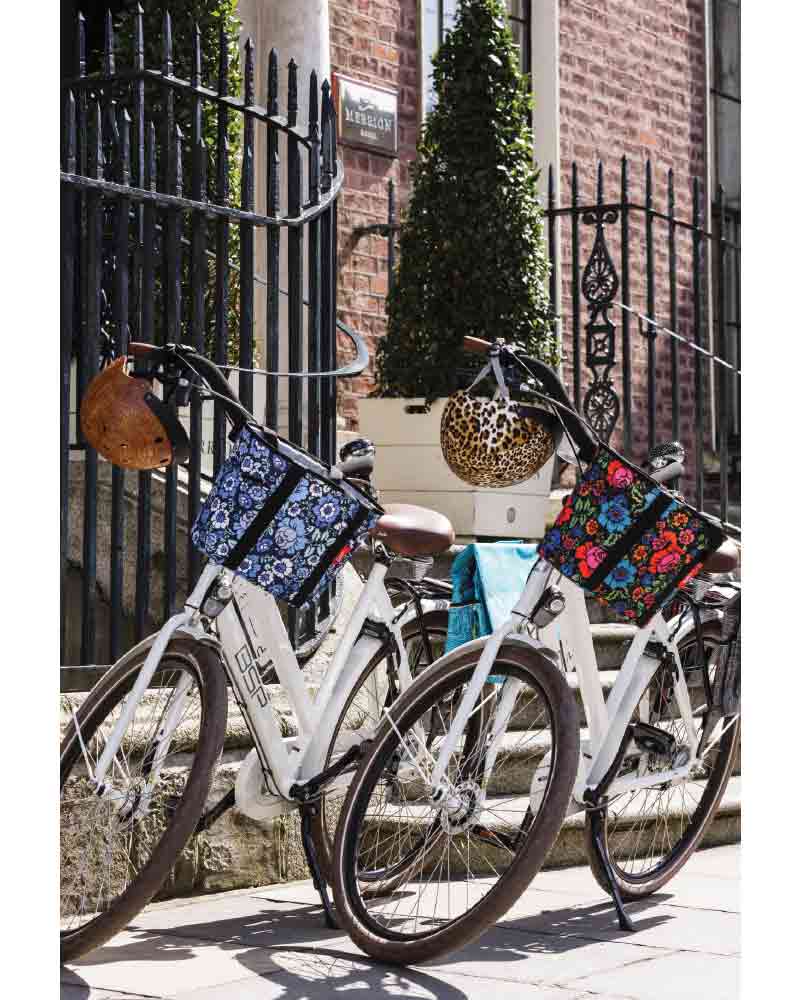 One of the best ways to see Dublin is by bike. Grab your Dublin Pass and head out to a variety of museums and sites, from The Guinness Storehouse and The Book of Kells to the National Museum and Dublin Castle.

With luxury, high-rise condos going up and down the River Liffey and a new modern motorway speeding straight through the heart of the Midlands (meaning it is no longer necessary to get lost with the cows on those old windy countryside roads), Dublin now rivals London for cosmopolitan sophistication. It’s also become more American than ever, with trendy chains and boutiques popping up all around Grafton Street and an abundance of five-star offerings.

With that in mind, this much-anticipated Irish “homecoming” had to be about more than just luxury. The two properties selected for our “town & castle” itinerary wield a provenance that places them among the most elite destinations in the world, frequented by royalty and celebrities alike.

What are you waiting for then? Off we go…

On the Town: Welcome to Merrion Square

You will fly into Dublin’s new international Terminal 2, a dramatic improvement over the Dublin Airport of the past. This shiny, efficient new hub (Aer Lingus has a nonstop flight from Chicago that can get you there in less than 7 hours) makes getting to the isle a breeze. Grab a limo or private car to our first stop—The Merrion Hotel, situated in one of Dublin’s most prestigious neighborhoods. 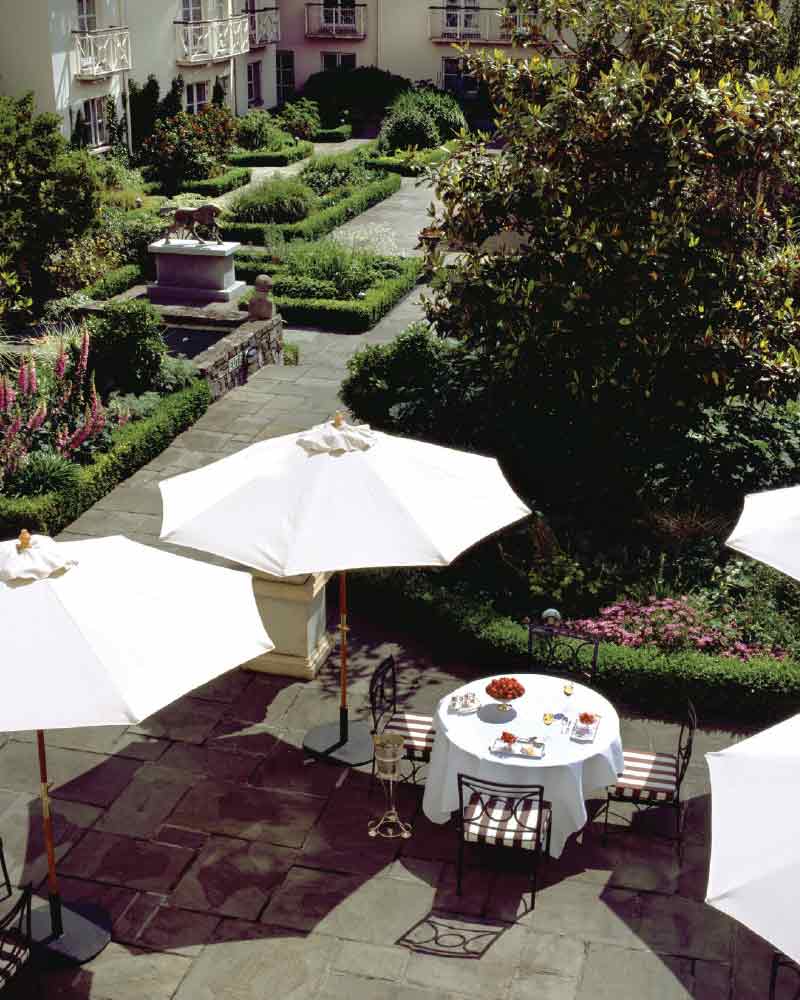 The Garden Room opens up for al fresco dining in warmer months, creating a lavish sanctuary in the middle of the city centre.

Enter the foyer of Number 24 Upper Merrion Street, located right across the street from Leinster House, seat of the Irish government. For more than 250 years, the Georgian townhouse-style mansions that now comprise The Merrion Hotel (which opened 21 years ago) have been the setting for fashion, wealth, political unrest, and poverty. In many ways, the story of the Merrion is also the story of Ireland, and that tale unfolds as you walk through a gilded maze of interconnected hallways.

One of the main characters was Arthur Wellesley, an Irishman born at The Merrion in 1769 only to go on to become Britain’s first Duke of Wellington. It was he who beat Napoleon in 1815 at the Battle of Waterloo and later become Queen Victoria’s Prime Minister. Influencing an entirely different chapter of Irish history was Valentine Loveless, who took the Fenian Oath—one of the first political expressions of Ireland’s wish to be independent from England—within the Merrion walls.

Now a proud member of The Leading Hotels of the World, The Merrion also houses the largest collection of private art in Ireland outside of the National Gallery. You’ll notice it as you wander through the hall down to the Tethra spa and pool, then back up to the Garden Room, then down to the lower level where an 18th century underground wine vault and bar awaits.

Accommodations are elegant and thoughtfully appointed, with 123 guestrooms and 19 suites, including a two-floor Penthouse Suite and private rooftop terrace. We were told that this is the place where all celebrities stay when they are in town, including Bruce Springsteen as well as Barack and Michelle Obama. It’s easy to see why.

While grand and luxurious, there is a graceful ease to the property that the Irish have long been known for. Your every need is tended to, with ample places within the hotel itself to relax with a book or a drink, and unwind after a long day of sightseeing. Located a few blocks from St. Stephen’s Green, not far from Trinity College and the Book of Kells, it’s the perfect place to explore all that this very walkable city offers.

And if you’re yearning for a touch of the old days of listening to traditional Irish music until the bar man tells everyone to go home, O’Donoghue’s Pub is literally around the corner at 15 Merrion Row. Built as a grocery store in the 18th century, it has been operating as a pub since 1934 and is famously known as the place where such bands as The Dubliners got their start. And because it’s Dublin, and because some things never change, you should follow my lead and close out your last night here—a real Irish rainbow (one of many) and the west coast of Ireland await.

This rainbow will be spotted through your window, arching over Leinster House, and at first will seem like a wonder. An omen, you might think, of what magic the second half of this adventure beholds. However, by the time you check out of The Merrion, get into your rental car (if you’ve never driven on the other side of the road, don’t fret … it’s easier than you think) and drive west on the M6 toward Galway, you are likely to see many more.

It’s the rainy climate you see, the on-again, off-again rainfall then sunshine that creates such natural beauty. You will drive about three hours out until you will switch to smaller roads that go up near the Lough Corrib (Ireland’s largest lake) and the small medieval village of Cong, made famous in The Quiet Man. The roads will get windy and if it’s still light out, you will see the crags of County Mayo looming ahead, following your map until something almost unreal appears along the road.

It is an entrance to Ashford Castle, complete with towers and a black metal gate and an attendant who will check his list for your admittance. In America, it would seem very Disney-esque and manufactured. But this is the real deal.

Built in 1228 by the Anglo-Norman de Burgo family (ancestors of those in the Burke family today), Ashford Castle sits on 26,000 acres of gardens, pathways, and secret cottages. Descendants of William De Burgh—a knight who settled in Ireland in 1185 and claimed direct descent from Charlemagne—the de Burgo family lived at the castle for more than three and a half centuries. The family lost it in battle to Sir Richard Bingham, the Lord President of Connaught, in 1589. In 1715, the castle was granted to Dominick Browne. He elaborated on the original design with a hunting lodge in the style of a 17th century French chateau, an architectural element that continues to define the structure. Browne also expanded the grounds, built roads, and planted thousands of trees, creating the magical grounds you are about to visit. The double headed eagles still bear his crest.

In 1852, Benjamin lee Guinness (yes, that Guinness) purchased the estate and kept it in the family until giving it to the government of Ireland in trust in 1915. In 1939, Noel Huggard purchased the estate with a vision of creating a “first class hotel for country pursuits.” And while the castle has gone through many changes and renovations since then, that’s exactly what it has become. 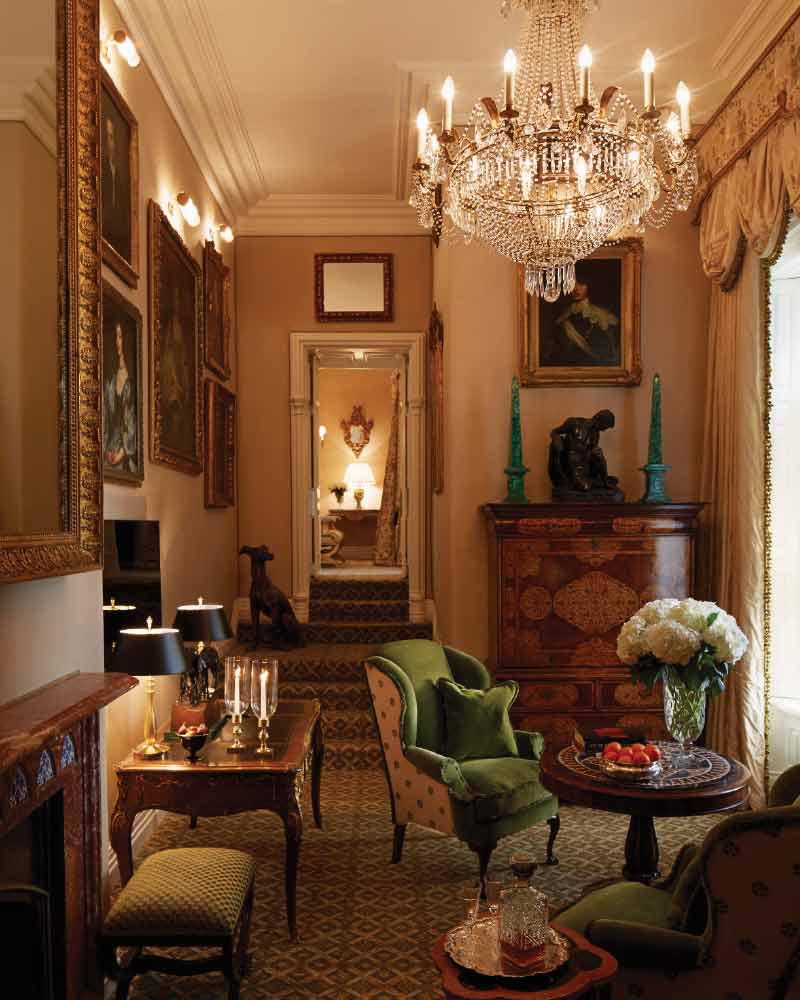 Inside the decadent Presidential Suite at the Ashford Castle.

From the moment that you park and hand over your keys, you will be transported back through time to a genteel, elegant country way of life. There will be no need to get the car back; everything you could want is right within the castle.

Heading to a falconry class at the Ireland School of Falconry? Stop by the front desk for a pair of Wellies, a warm coat, and an oversized green umbrella if it’s raining. Fancy a film? The castle has a movie theater, complete with popcorn and snacks. There’s also a billiards room, a cigar lounge, a library, and ample bars and restaurants (including one aptly called The Dungeon) to entertain you. But that’s just the inside. A spiral-bound guide to walking and jogging maps on Ashford Castle grounds can be picked up at the front desk. It even includes a glossary of estate wildlife to look for.

From archery to shooting to zip lining to horseback riding, the range of activities feels almost endless. A favorite on our visit was falconry and morning walks with the Irish wolfhounds. A boat cruise of the Lough is also highly recommended (and you can take the chill off with a hot toddy on board). But you can do almost anything, even if it’s a chauffeured drive around the grounds and nearby Cong. 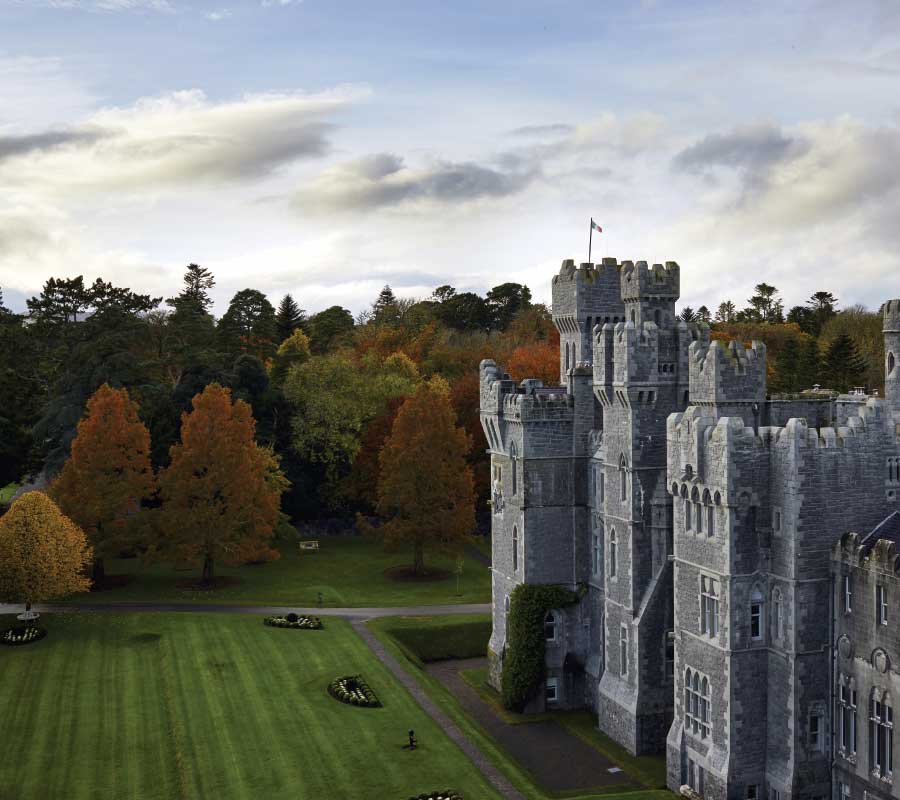 The 800-year-old Ashford Castle opened its doors as a luxury hotel on May 15, 1939. This year marks its 80th anniversary.

However, the greatest challenge of all might be pulling yourself away from that castle suite. The views from the 83 rooms and suites are like something out of a fairy tale, as is the roaring fireplace, Egyptian Cotton bed linens, original works of art, and bespoke antiques. A special touch is a complimentary decanter of sherry, refilled nightly for your convenience. It’s so apt and so lovely. Just the kind of detail that makes royalty and celebrities flock here. Famous past guests have included King George V, John Lennon, George Harrison, Oscar Wilde, Ronald Reagan, U.S. Senator Ted Kennedy, Robin Williams, Brad Pitt, Prince Rainier III of Monaco, and Princess Grace. Pierce Brosnan got married at the castle. And naturally John Wayne and Maureen O’Hara stayed here while filming The Quiet Man.

The only negative thing anyone could possibly say about Ashford Castle is that at some point, everyone must pat the wolfhounds on the head, take in one last gaze, and drive back out over the moat through those castle gates.

And perhaps the final takeaway is that maybe this journey isn’t about luxury at all. Yes, it may be a different Ireland than the one we remember from our youth, or the one your Irish immigrant grandmother told you about (but perhaps you have yet to see). But experiencing Ireland through the lens of these exquisite properties is almost a portal to all the things that make it the country was, is, and always will be—land of poets and musicians, scholars and rebels.

For more information about The Merrion Hotel, visit merrionhotel.com. Find out more about Ashford Castle (and get a preview of spring and summer events) at ashfordcastle.com.