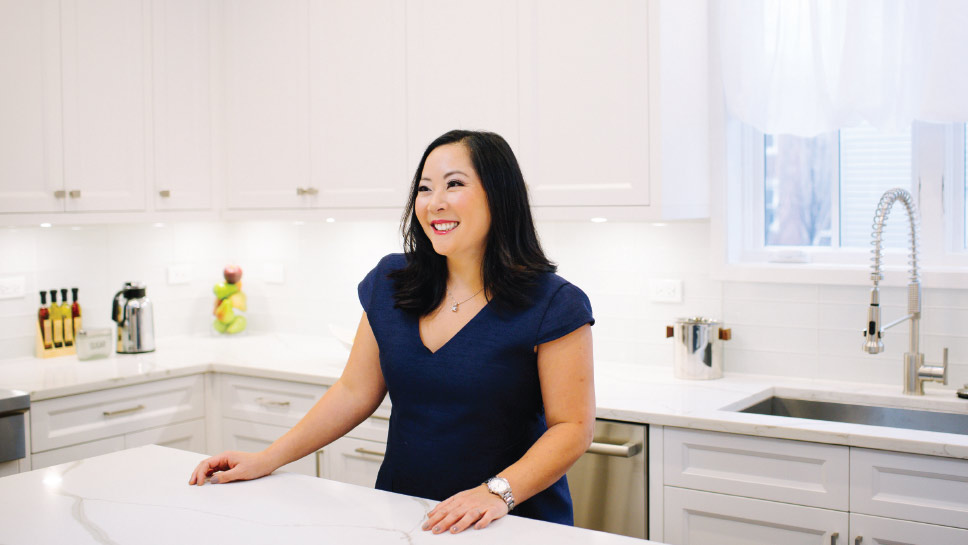 Amy Duong Kim and her team are helping buyers and sellers in the Hinsdale area with their real estate needs. PHOTOGRAPHY BY JOEL LERNER

Amy Duong Kim didn’t start her career in real estate, but after 14 award-winning years in the industry, she knows she made the right decision to leave the world of actuarial science and enter the world of buying and selling homes. Duong Kim, who has been recognized in the top 1 percent of all area brokers by the Chicago Association of Realtors, is a senior broker and founding agent for Compass in the Chicago area.

In just over one year with Compass, Duong Kim has helped grow the company’s presence in the Chicago area from seven agents to more than 300 today—and growing.

“I’m doing things differently,” she says. First, she helped to open the Hinsdale-area office for Compass, but she also still works with clients in the city. She has one foot in the Western Suburbs and one in Chicago—which gives her and her team the ability to help buyers from the city truly understand what makes the Hinsdale area so appealing.

Duong Kim should know; this is where she lives with her children and husband, Howard, who’s also a realtor and works alongside her as one of the leaders of the Duong Kim Global team. And on the other side, she can help Hinsdale buyers with their purchases locally, or when looking for investment properties or other real estate opportunities in Chicago. As one of the top producing groups in the business, the seven members on Duong Kim’s team speak six different languages combined, and their strengths complement one another.

“A lot of my clients might use me to help with their home purchase, but then they use my other team members for management, rentals, and selling. We focus on our strong suits,” Duong Kim says.

Duong Kim says she also has to do things a little differently this year because of her move to Compass. The company—which recruited her when expanding into the Chicago market—has a goal to own 20 percent of market share in the top 20 markets in the country. Duong Kim says the company’s technological capabilities are key; Compass has its own engineering team and an analytics-driven app that gives buyers industry insights into what’s driving market behaviors and prices in their cities.

“It all gives a new and fresh perspective on selling and buying real estate,” Duong Kim says. On the buyer’s side, she can correspond with clients directly through the app. For sellers, Compass has an in-house marketing team. “It’s like having an ad agency in the brokerage,” she adds.

For sellers, Duong Kim also has valuable access to Chicago agents, who might have clients looking for something in the area. “They know I live out here, and they come to me for advice. They ask about inventory. It creates opportunities for a pocket market that’s different from other realtors,” she says. Duong Kim creates interest in listings before they ever hit the MLS because of her connections to some of the top agents in the city.

“We love helping on both sides,” she says. “I like that whole start-to-finish process.” Duong Kim has been consistently recognized for her talents, including being honored numerous times by Chicago Agent’s Who’s Who Awards. Her focus on her clients’ needs and wants has always made her an exceptional broker. And now she has the power of Compass—and her team—behind her, helping her grow her business in the Western Suburbs.