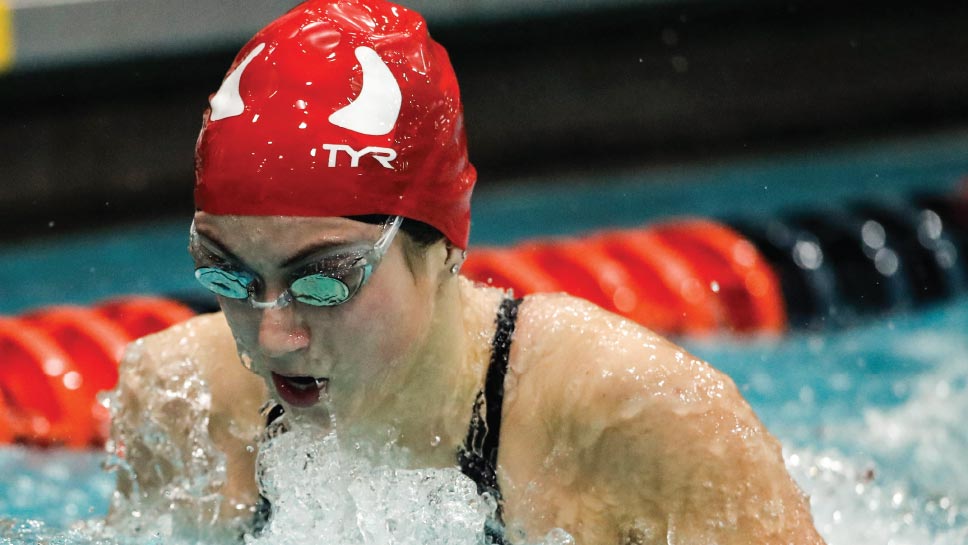 Anna Glowniak took a photo of her family’s dog, Cooper, two years ago. In it, the black-and-tan coonhound’s head sticks out of a pile of leaves. The autumnal image makes the Hinsdale Central High School senior swimmer and photography buff smile each time she sees it.

And maybe, just maybe, as adept at swimming the breaststroke as he is at churning the doggy paddle. Visualize that photo of Cooper and the leaves again. See it? Now substitute water for the the leaves.

Cooper is coming up for air, in the middle of a breaststroke race.

Glowniak’s specialty in the sport of swimming is none other than the breaststroke. The fourth-year varsity Red Devil placed fifth in the event, with a time of 1:04.03, at the Illinois High School Association (IHSA) girls swimming and diving state championships at Evanston Township High School on November 17. The 5-foot-4-inch water dart also helped her team’s 200-yard medley relay finish in 10th place (1:46.21) at the state meet; the quartet also included senior anchor Rachel Fuechtman, junior Anna Gruvberger and sophomore Melanie Quinones.

The fifth- and 10th-place medals were the first two of Glowniak’s prep career.

In the state preliminaries session, held on the previous day, Glowniak had sped to the school record in the 100-yard breaststroke, clocking a 1:03.98 to break the previous mark set by Emily Graham in 2014. Graham shot a congratulatory text message to Glowniak, who was an eighth-grader when Graham became the fastest breaststroker in program history.

Having an efficient pullout—executed underwater, after the start of a race and after each turn—is critical for a breaststroker. But it isn’t Glowniak’s strength; she more than makes up for that deficiency with her sheer will in the second half of her races. She swam the final 50 yards of her preliminary heat at state in a rapid 33.61.

“That’s Anna, pushing the pain away, being tough and impressive, giving everything she has in the most difficult part of a race,” Red Devils girls swimming coach Bob Barber says. “I’d never seen [Glowniak] swim with more confidence than she did this year. Anna was always a reliable swimmer for us, ever since her freshman season, but she proved to be more than that in her final season—she showed her drive, along with her grit and determination.

“Anna, the coach adds, “blossomed as a competitor and continued her family’s legacy of representing the school well at swimming meets.”

She made her older brothers, Brian and Brandon, proud. Brian Glowniak, 20, and Brandon Glowniak, 19, both motored quickly in chlorinated water for HCHS boys swimming teams, with Brandon (now a freshman at Indiana University) anchoring the Red Devils’ 200 freestyle relay crew to a state championship in early 2018. Brandon is a sophomore at Georgia Tech in Atlanta.

Each brother excelled on land, too, specifically in the classroom.

“All three of us,” Anna says, “know how important it is to have balance in your life.” Anna Glowniak is interested in attending Emory University, also in Atlanta.

Neither of the standout swimmers’ parents, Bob and Kim, has a background in swimming. Kim, with a young Anna usually in tow, would drive Brian to practices at WEST Swim Club in Willowbrook. The mother and sister would sit; Brian would swim, swim, and swim some more.

Anna was about 5 years old at the time—and probably not very good at sitting still.

“My mom eventually got tired of watching me at my brother’s practices,” a smiling Anna recalls. “It was around that time when I started swimming with the club’s pre-teen group.”

“My junior year I was so nervous before every race,” Glowniak admits. “And I wanted to win badly, so badly, at each meet. Too badly. My mindset my senior year changed. I took a step back and realized it would help to tell myself, ‘I’m here to have fun,’ while I stood behind a starting block before climbing it.

“Swimming,” she adds, “is a tough sport, and you’re going to fail to achieve what you want to achieve in it at times. Having confidence in yourself to come back after failing is a great skill to have. In sports, in life. I’m thankful I have that skill, and I’m thankful for the experiences I’ve had in swimming.”

Kim Glowniak watched her daughter again and again in 2018—as as a proud spectator, not as a babysitter at one of her son’s swimming practices. She also made her signature protein muffins for Anna, who likely devoured them near an envious, salivating Cooper.

“My mom is very caring,” Anna says. “She told me, before the state meet, ‘You focus on swimming, and I’ll do everything else for you.’”