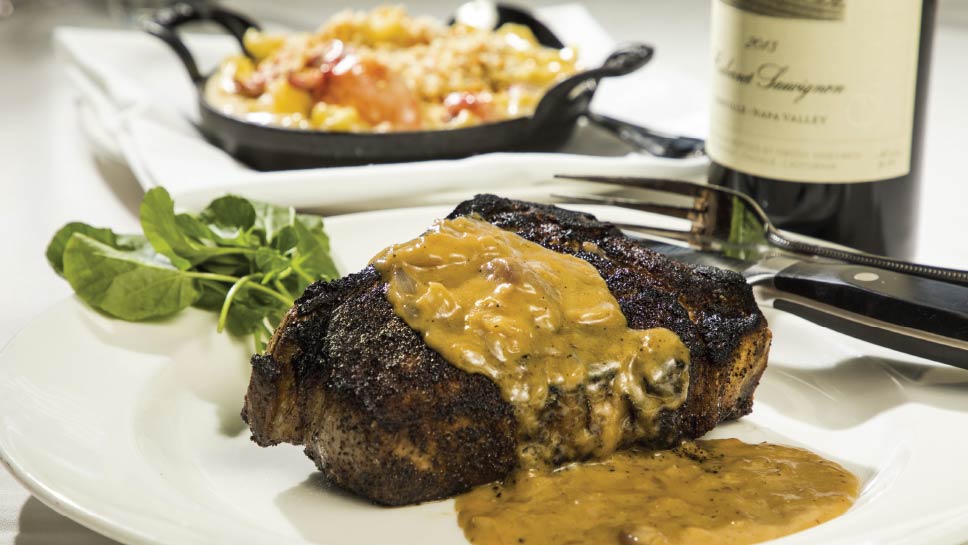 The steaks at Capital Grille are a cut—and crust—above the competition. PHOTOGRAPHY BY JOEL LERNER

At most steakhouses, we are firm proponents of ordering our steaks the same way we order our whiskeys. Keep it simple. Let that beef speak for itself. Salt and pepper. Maybe a pat of butter or a side of au poivre. But beyond that, we’ll just take our steaks straight up without a lot of fuss.

There is, however, one notable codicil to our steak covenant. Whenever we visit a Capital Grille steakhouse—including the incredibly hospitable and elegant location in Lombard—we make sure our steaks are crusted to the hilt.

In part this is because Chef Mitch Gierke, who has overseen the grill station in Lombard for 12 years, doesn’t wrap, coat, and batter his steaks as if he was prepping for a Friday night fish fry. His signature coffee-crusted bone-in New York strip and his porcini-rubbed porterhouse manage to amplify the steak’s innate flavors in ways that traditional preparations don’t.

The application of his Kona coffee rub, for example, won’t slap you in the nose like a fresh-brewed cup of cappuccino. It’s more of flavor accent, which yields a more caramelized texture than you usually get from a New York strip. The addition of a thick shallot butter then adds notes rarely seen in a steak. Think French onion soup meets grandma’s gravy.

The porterhouse, by contract, pits the umami from the porcini rub against the plum-sweetness of an aged balsamic and a topcoat of black pepper. It’s like eating a steak that’s been infused with steak sauce: this big bold semi-sweet bouquet of dark warm spices that works especially well as a counterweight to the chill of the fall.

These creative flavor additions are buoyed by the fact that all of the Capital Grille’s steaks in Lombard are dry aged and cut on premises in a walk-in behind the restaurant’s sparkling open kitchen. Think of the dry-aged process as the protein equivalent of a reduced sauce. Steaks are stored in a cooler at 78-82 degrees for 18 to 21 days, which evaporates moisture and concentrates the flavors of the beef. Gierke can lose up to 40 percent of the weight on a strip loin in that cooler, but the benefits of that weight loss are balanced out by the rich nutty, almost Parmesan-like flavor of the steaks. 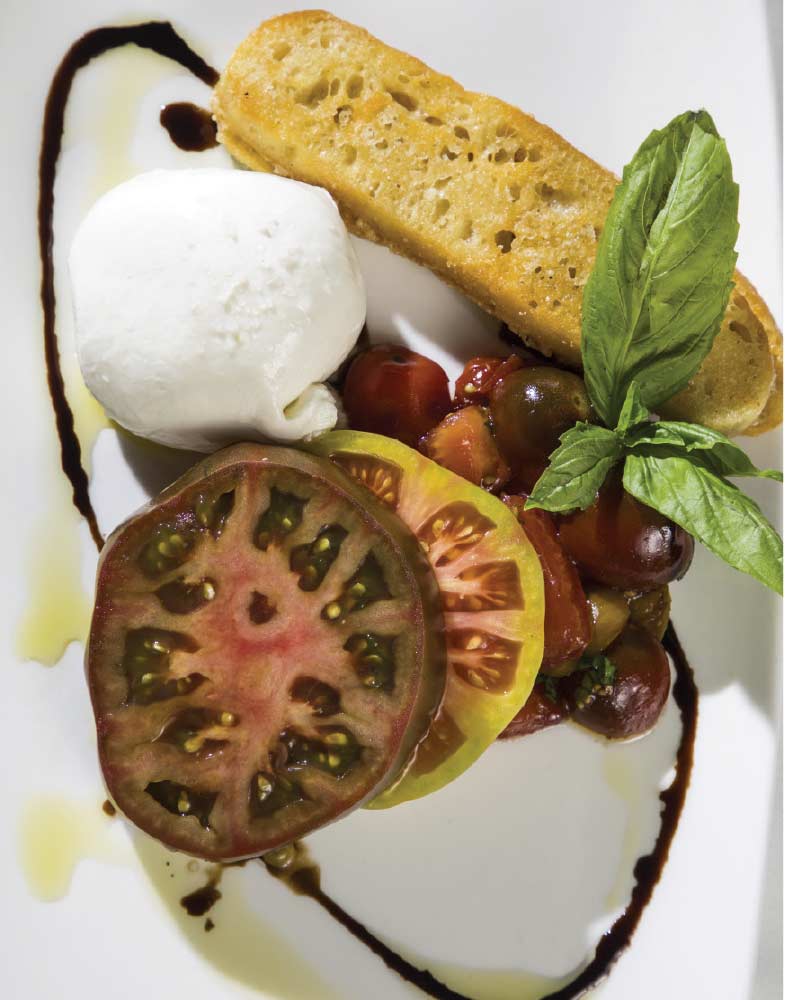 The look and feel of the Capital Grille in Lombard dovetails perfectly with those Old World dry age techniques. The restaurant looks like it’s a holdover from the Gilded Age: warm woods, giant gold-plated portraits of famous figures, sculptures of eagles and brass clocks showing times from across the globe, which is a perfect backdrop for a first-class steak experience.

There is plenty to sample beyond the beef, especially when it comes to the appetizers. There’s a similar openness to experimentation with common steakhouse staples. Instead of simply offering a simple platter of fried calamari, the Capital Grille adds a host of sweet and spicy peppers dressed with plenty of lemon, delivering the complexity of a great South Side sausage and peppers dish. But the showstopper, in terms of small plates, is the house burrata, which comes with an array of fresh heirloom tomatoes, cheese-crusted toast and ultra-fresh burrata. It’s the ultimate palate opener for the steaks to come.

Two sides can’t not be missed. The glazed house Brussels sprouts are almost port-like in their complexity: sticky and sweet with huge smoky bits of bacon for a kick of smoke. And at a time when there are so many grossly subpar but expensive mac and cheese offerings being foisted on guests, it’s welcome to find a luxury mac that’s worth the price tag. The Grille’s lobster mac manages to re-create the complexity of a cheese-swathed bisque in pasta form.

Should you want to veer more toward seafood, the catch of the menu is the meaty swordfish topped with crabmeat and set in a rich mustardy beurre blanc. In the end, room must be saved for dessert, especially for two dishes in particular. The coconut cream pie boasts an almost cookie-like crust and fresh made caramel sauce. And the house cheesecake avoids being too sugary thanks to ample use of ricotta cheese. And yet it’s the bruleed tops of these little bites—cut like finger foods—that proves that just about everything at Capital Grille is crowned with finesse and grace.